Felt trashed mentally. Brainfog is back and this just angers me.

Didn’t even feel like going outside, even though the weather was outrageous. Just spun some hours away.

Woke up feeling pretty out of it, again. Very much sick of this shit.

Today, my V6 problem was dismantled. Dust in the wind, I guess. I worked on the only V5 (of four) I can’t send on the 45 overhanging wall, but failed on it today, yet again. Moves can all be done, just can’t put it all together.

Did a little work on two slabbier V7’s, but not much headway. Called it in quiet desperation. It’s never fun to end a session without even a consolation prize, but I mean: whatever. It’s training and training isn’t always fun and filled with participation trophies.

Just wanted to do this, instead of taking a 0 on the “moving my legs to keep my heart rate up” scorecard.

Good moves avoiding the roof by moving out the left, then some cautious, thoughtful climbing afterwards as the holds get a little more few and far between. Nothing too outlandishly desperate, but the going is a little slower than the standard route, where you can essentially paddle up the thing. Summited via Greenman’s Crack (pictured below) to keep with the, “keep as left as possible” theme,

Afterwards, wandered to the bottom of the Second, and took Free For All up. Made another slight variation by taking the last pitch via South Face, rather than Southside. It took me forever to unlock how to do the crux for South Face (all solo), so now I feel I need to wire it. The rest of Free For All felt pretty casual.

Still a little sunlight left, so I wandered down to the Amphitheater, and redid all the classics there, including T-Zero, and Slot, which I solo’d for the first time. T-Zero:

Which is no problem. Slot:

Feels a little more heads-up. Maybe it’s the starting overhang that mentally locks you in?

All in all, a nice, not-so-long day. If only I didn’t leave my head torch at the Amphitheater which I had to go back and grab, and then didn’t get almost-slaughtered by cars on 9th while riding home, I would be in a better mood. Sigh.

Interesting session. Certainly felt the day before, and bouldering the day before that, so started off very slowly and easy on a lowly 5.8, and worked on up from that on lead. At ~5.11.b, I felt it better just to top rope, as I had a bit of a time constraint.

Immediately got on a new to me 5.12, and sent it clean. Managed to do three more 5.12’s in the same style in a row. Whoa. That’s never happened before. Even though I was a little worked, I realized I had inadvertently put myself on a fairly regimented limit bouldering training plan with my attempt at projecting that V6 in the cave.

Even though I didn’t send it, the mere attempts have gotten me pretty strong. I’m psyched, that was a big jump in performance. I felt for the most part that I was hiking up those climbs. 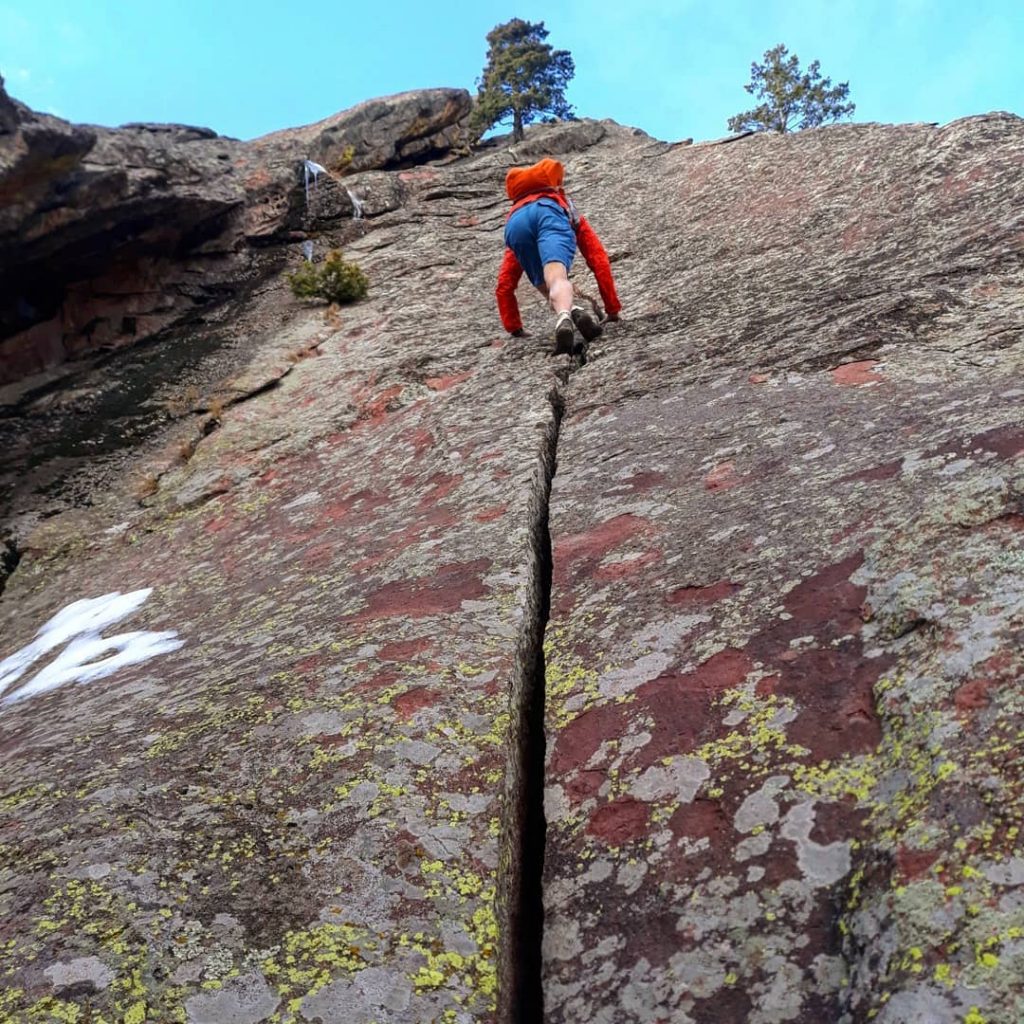 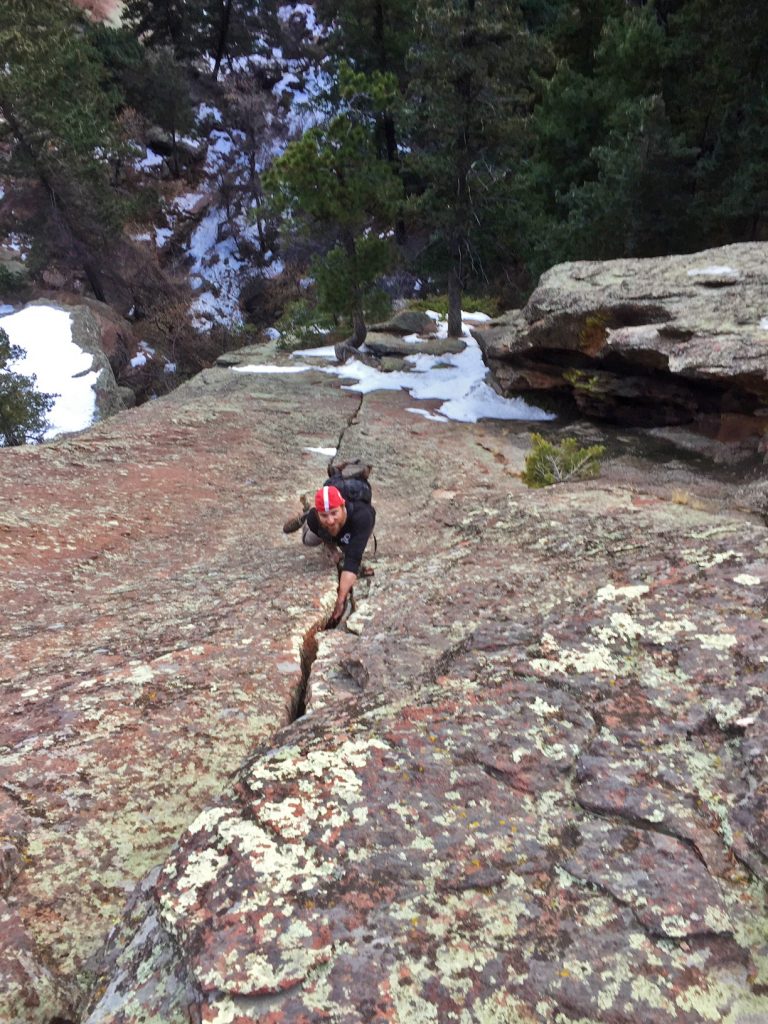 On the ~second pitch of Achean Pronouncement

I probably agreed to do Achean Pronouncement without first realizing what it was – the last pitch is somewhat of a difficult one to onsight solo safely. I decided not to voice my reserves to Peter on our hike in, as the last pitch can basically be skipped and you can get to the ground without a problem, so let’s just have a look-see, eh?

The climb starts out somewhat grungy up a steep east face, but quickly becomes quite fun once you cross onto the north face itself, with a hands-to-fist splitter crack (rare in the Flatirons!) that widens to an offwidth higher up. Pretty fun, because (despite?) you’re still at a way casual angle.

Managed to lose a shoe somewhere underneath an overhang. Whoops. 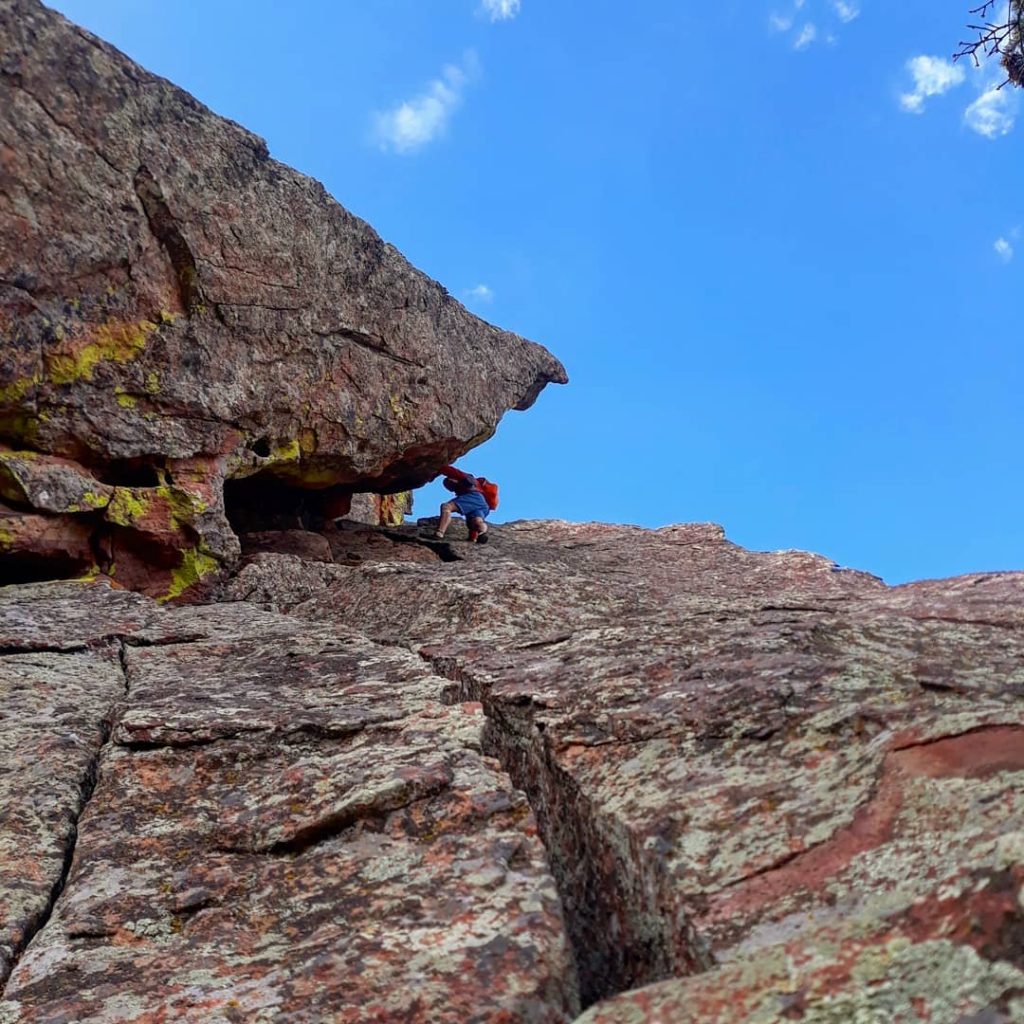 Next part is a knife edge scramble to a thin slab traverse to the meat of the climb, which we spent an excessive amount of time sussing out – mostly thinking of where gear placements would go. We didn’t, you know, bring any gear. But I guess we thought we might, uh: next time. 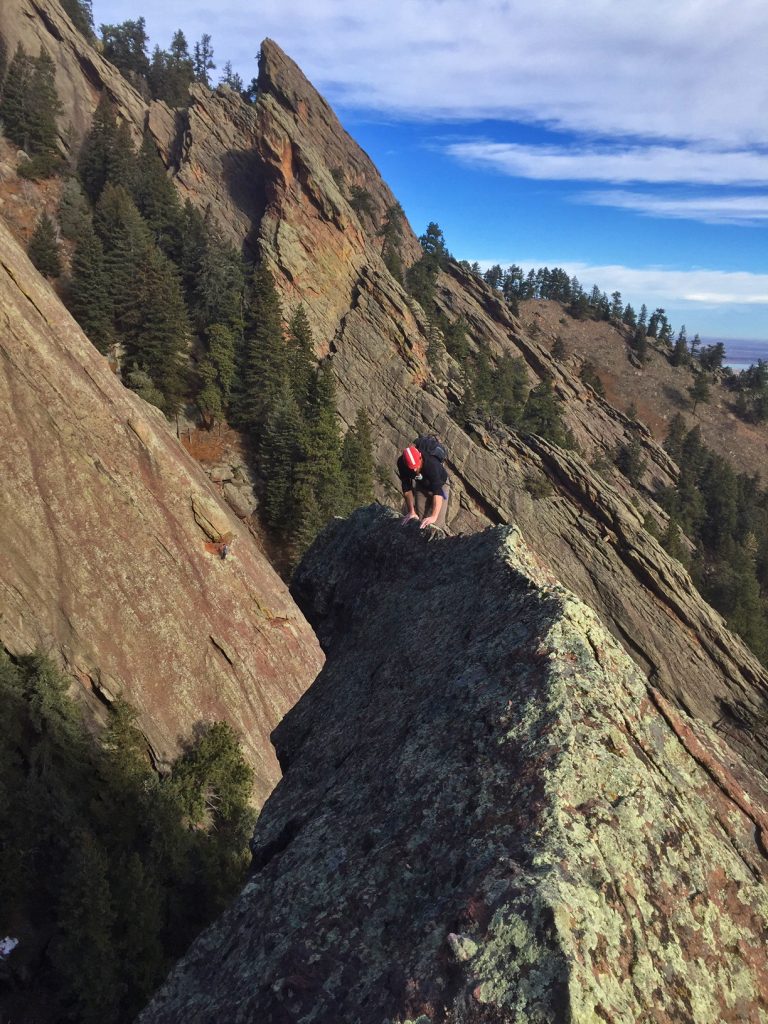 On the knife edge pitch of the Achean Pronouncement

While yammering away at each other at what gear to put where, I attempted to piece together a way to climb it casually, even though there’s a lot of air underneath your ass. Move by move, I unlocked the sequence, and with a little under the breath, “f- it”, just went for the top.

Brought the rope up with me as there’s anchor’s there, so I then belayed Peter up. Peter wasn’t into the line, (“Too much like climbing!”, he said), so he tried downclimbing an alternative line that goes to the west of the line I took, then climbed back up. Finding it to his liking, I gave it a go too. Quite airy and longer, with no real pro, but definitely not as strenuous. I’ll probably keep doing it the way I do it, but Peter’s solution could probably be used as the downclimb, once wired.

Next up was Backporch, which was fun enough, but I can’t see being in the top ten of Roach’s Classics. Happy to have climbed it though, and tick it off the list(s).

Then to Fo and Fi – Fo being a really great, varied route, and worthy to be done again. Fi was a nice easy slab after a few 5.6+’s we’ve been ticking off. The wind was starting to get a little strong, but onwards to Dino Rock we went. I’ve been on Dino Rock before to work on The Shaft with Chrissy (5.12b). I managed to scratch up it once, on top rope, with many falls, so it’s still um: still to be ticked by me.

The east face (right?) of Dino was fine enough, but the wind was starting to really pick up. First my sunglasses, then my casquette flew off my head! Downclimb was quite spicy indeed in such conditions. Hiking down the trail, we found my hat (hurray!). Sunglasses are probably gone for good.

Decided to call it there, as the wind just getting too strong to make things enjoyable.

Woke up feeling worked! Small wonder. Hemmed and hawed about going bouldering inside, but decided it would be a good thing to do, but I kept my expectations low, as I’ve made quite the streak of climbing/scrambling/climbing days strung together, and I’m not a very strong person. Lots of the scrambling the day before was fairly strenuous in comparison to what I normally get on.

So with that in mind, I kept my distance from the very steep stuff, and worked on some trickier problems. Got up two new-to-me V6’s and one V5, which I was happy with

Ended the sess. feeling wrecked, and with my right rock boot’s rand cut though. I kept rolling off of small footholds (sometimes hitting another hold with my knee – painfully), so I knew something was up.

I’ll repair it as best I can, but it’s the end of days for this pair of Miura’s. They took to two resoles, so I’m more than happy. With better technique, I wouldn’t be climbing on the rand so much.

One of the gym employees stopped me before I entered and asked if I ride bikes a lot. I guffawed, which is the correct answer for me to that question. He went on in saying he always sees me in the darkened corner of the spin bike room late at night, sweating away.

As so totally lame and out of character it is to ride bike-like machines that don’t go anywhere, it certainly does get you fit and it certainly has helped me keep with my aerobic conditioning goals.

Felt a good bit tired! So I called it. Beginnings of a sore throat I’m worrying about as well.