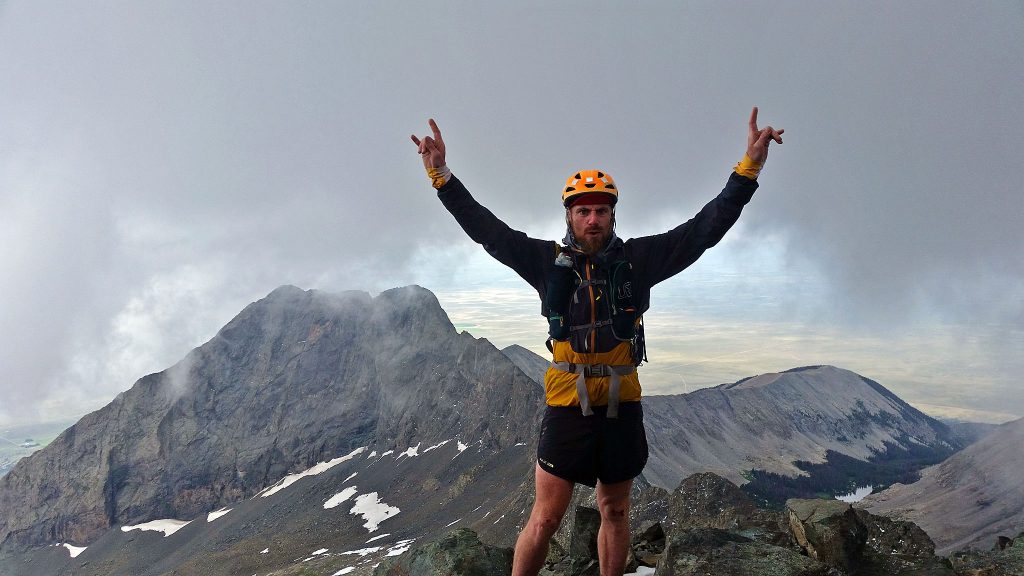 The 2018 FKTOFTY Awards have been announced. I’ve very thankful that the Tour of the Highest Hundred was selected in the lineup! Although, it didn’t “win”, I really had no reason to think I would! I’m actually a little confused how different FKT attempts can even be compared to each other, but if all we want to do is celebrate FKT projects in general, I think that’s a worthwhile reason to make such lists.

But if I hope that the Tour of the Highest Hundred would win something like a popularity contest… forget it. It’s too long, too hard, too weird, and too obscure to ever become the type of, “Destination FKT” something like the Grand Canyon Rim to Rim to Rim or the John Muir Trail are quickly becoming. And that’s totally fine with me. A litmus test is this: try to visualize exact what teh Highest Hundred challenge would entail. Kinda hard, right? What do you focus on? The distance, the peaks themselves, the elevation gain, the route? It’s a complex mother.

But, there’s a lot of reasons I think going for the Colorado Centennials by bike and by foot self-supported makes a totally life-changing challenge, even if you don’t make it your own FKT.

A big reason is because of that relative obscurity. Finishing the Colorado Centennials by any means is usually a multi-year affair. Peakbaggers will finish the 58 fourteeners in the state, and then think, “What’s next?”. If you hadn’t pre-planned to do the Centennials, there’s a lot of ground to retread. There’s always a few mountains off Centennials tick list that may just not hold enough interest for someone to complete it. Some are too hard, or too dangerous or too, well: boring (or at least inconvenient to get to) The Colorado Mountain Club has records of less than 300 people completing it in total. The Centennials of the Elks are looser and more dangerous than perhaps even the Elk 14ers. You think Thunder Pyramid draws crowds? The San Juan Centennials can be pretty desolate and you can’t fake the technical parts – you gotta do Jagged Mountain and it’s easiest route is still 5.2.

To date, I only know of two people who have done it only by bike and by foot: Rob Barlow in 2016, and myself in 2017. All due credit due to Rob, for conceiving his crazy idea, and executing it. The summer of 2016 when I was following along Rob’s ride, and Joe Grant’s Tour 14er was really the main reason I got off my ass, got, well: less injured, and got fit to give the challenge my own go.

Rob did his trip having a support vehicle following, which allowed some pretty interesting route flexibility. If he wanted to, he could traverse a whole group of mountains, starting from one trailhead, and finishing off at a different trailhead, with his bike waiting for him. That’s service.

The main difference in my trip is I forgo’ed such a support vehicle and did everything self-supported. (less of a difference I think is I also started/finished at the same place) This made the mileage quite a bit longer, as every on-foot run/hike had to be a loop or an out-and-back, instead of having the option of a point to point. If I could use a metaphor, I thought of Rob’s trip as completing a major big wall rock climb with the use of aid, trailblazing the way. When I came, I was able to free the line cleanly. Slightly different styles, but I think an evolution of the same big idea.

I do remember, even after committing to the idea, that I actually didn’t know what all the Colorado Centennials are, or where they are located.  Of the thousands of mountains in Colorado, there’s obviously one hundred that are the highest, but exactly which ones those are, is kind of a mystery to the casual peakbagger. But, that was part of the fun of the challenge: learning about these new mountains, then quickly becoming intimate with them. Even some – well, most of the more popular Colorado 14ers which makes the first half of the Centennials list, were visited by me personally only once before on the last time I rode a bike around Colorado ticking off peaks for the summer.

Recon’ing main parts of the “route” is pretty difficult to do, as there’s so many mountains, and so little summer in Colorado. More so if you’re like me, and don’t own a car! To get ready, I only had the time and cash to do two recon rides: one lasted 9 days, the other two weeks. I only climbed a few mountains that were new to me, and used the rest of the time in the Mud Season of Colorado wallowing around in melting snow, somehow gaining an impressive amount of fitness in the process.

Compare that to a shorter route like R2R2R, where you could potentially memorize almost every switchback if you would like. Part of the thrill of the Tour of the Highest Hundred is just going for it. Two months is a long time, and it’s impossible to time it well for things like weather. You will hit the shit. I think it’s still futuristic to think you can dial in the Tour of the Highest Hundred.

The length of the trip is also one to give a potential challenger pause. Although there’s room to improve on my time, it’s no gimme. Beyond the time doing the actual challenge, there’s also the time committing to training specifically for the trip, then the time you must allot for recovery.  For example, by the end of February, I stopped anything of what you might call conventional running training, and instead focusing almost exclusively on large amounts of weekly vert, culminating in the Everesting of Green Mountain in April. I went to the climbing gym every other day and trained for at least 2 hours, mostly bouldering. Lots of bike rides, too.

That lack of specificity is quite different than what you would do to a mostly-trail running challenge – no sponsored elite trail runner is going to make climbing hard a precedence in their training. I don’t know if that dramatic shift in activities would be something a more hardcore mountain runner would be down to take on.

I think the sheer size will also see a fair number of scratches to those who attempt the challenge. If you take a survey of Colorado peak baggers and ask them how many times they’ve been denied a summit because of weather, I bet you’ll hear it happen more than once a season. How I was able to do 105 peaks in a row without once being denied is certainly a little bit of luck. Not to say I didn’t take many risks to get it all done, but I did get it done.

The next challenger would have to be just as lucky, and just as, if not more bold, than I was. I don’t quite know where the line between bold and foolish is, but my suggestion to a future challenger is to be in better shape than I was! I play down my fitness quite a bit – it’s easy to do when you’re not training for just one thing, like trailrunning, or climbing, or cycling. You’re always just, “kinda good” at all three disciplines at the same time, without the room in your training to peak at any one.

But that’s sort of the coolest part of the challenge – it’s not meant to be easily even finished. Like, if you registered in a 50k or whatever, the entire race wants you to finish. There’s convenient aid stations with volunteers that would do nothing short of wiping your butt to get you across the finish line. Not so for something like a 2 month self-powered peak bagging trip. The most optimal line to all the mountains isn’t even known – I’ve only tried my best guess! I think that’s somewhat of a turn-off to some people, that lack of beta – there’s no plan to simply execute. There’s no white blaze to follow.

What does this all cumulatively mean? Something like the Tour of the Highest Hundred is a wild ride when compared to other FKT challenges, not for the faint of heart, and certainly not for someone that likes to simply follow an already well broken in track. It’s not very comparable to other challenges out there, and would attract perhaps a different type of person to take it on. I look forward to who toes the line on the next Tour 14 or Tour of the Highest Hundred.

Time to start thinking about what you’ll be doing, this summer!

Yeah. FKT’s are now a well known part of the lexicon. And there are the “OKT’s” – Only Known Time. But the Highest Hundred Self-Propelled Self Supported might be in the “NAKT” category – Never Again Known Time 😉 Like, is anyone else ever going to try this? (I’m certainly not). The last time I thought of a NAKT was re Skurka’s Alaska Yukon Expedition. Anyway, congrats!