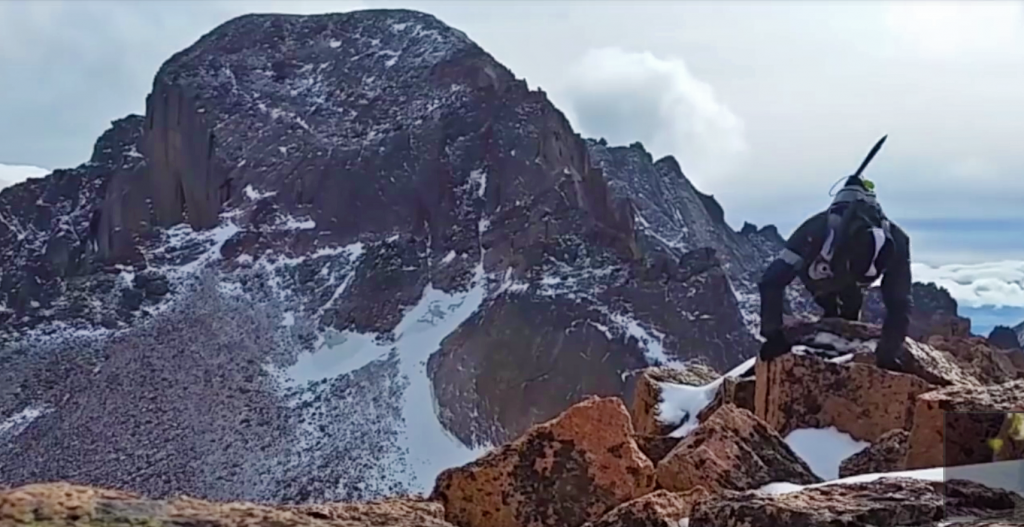 Gerry Roach’s Longs Peak Radical Slam as described in his 14ers book: top out on 7 summits in the Longs Peak area: (Meeker, Longs, Pagoda, Storm, Mt. Lady Washington, Battle Mountain, Estes Cone), topped off with 50 push ups at the trailhead. I’m admittedly pretty terrible at push ups, and this has always been the crux of the day (if one can believe such snobbery).

Also, I’ve actually done the Radical Slam already this year (including the bike approach/retreat). Why not do it the hard way: start with the lowest peak, and work up from there, counter-clockwise? That way, you’re well through the day when you need to tackle the toughest technical part of the route, and the highest summits on the list.

That’ll also keeps you honest – you know how easy it is to skip Battle Mountain and Estes Cone, and head straight to the trailhead, ticking off merely a Longs Peak Grand Slam? Easier than eating three breakfast burritos at Ed’s Cantina in Estes Park aprés doing the full-meal-deal Radical Slam, that’s how easy.

To add to this all: let’s also do this in the Fall (Oct. 30th), when the days are short, cold, and very, very windy, rather than on a perfect summer’s day. The chances you’ll become benighted are in your favor! Nothing is funner than descending the Loft Route than descending the Loft Route in the dark. Think you have a hard time finding Clark’s Arrow? What if you’re looking for it under a new moon with a failing headlamp?

Finally those push ups, hmm: how about we do a set of ten on each peak – on the very top of the peak, rather than just at the end? We’ll get 70 in, rather than the textbook 50. That will give me a little time to recover from the last 10, which may exceptionally imbalanced arms could use (talk to me about how many pull ups I can do in day!). I say the compromise I’ve set up is about fair, yeah?

The stage is set, the challenge… accepted? The bike chain is lubed, and the alarm has been programmed for some unrealistically early time. Are you ready, set,

[…] item: Justin Simoni has upped the ante on the the LPP, and is attempting each ascent completely self-powered from Boulder, using a bike to reach the various trailheads (the LPP “officially” requires a least one […]