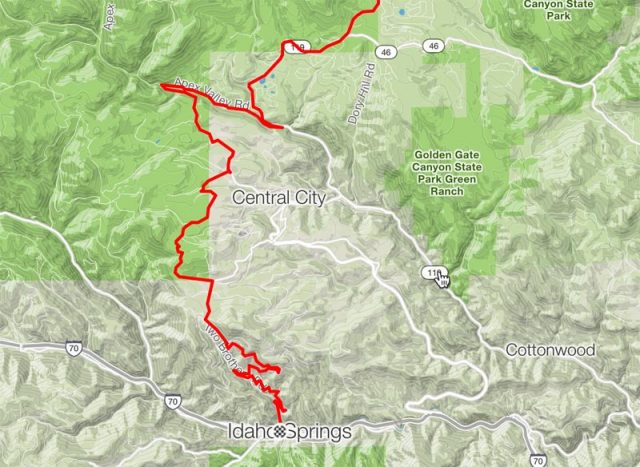 Ah, a good nice long ride in the Colorado Front Range foothills. If you’re like me, you like your rides to be challenging and engaging – as well as avoiding perils, such as traffic. A ride from Boulder to Idaho Springs (and beyond!) should be an easy target to hit. Idaho Springs makes a good resupply point, if you’re hoping to go further into the mountains, as there’s a good bike route from the Springs that you can take up and over Loveland Pass and onto the other side of the Continental Divide.

Unfortunately, between Boulder and Idaho Springs are the old mining townsites of Black Hawk and Central City, which now are home to gambling towns. Black Hawk seems to have quite an aversion to cycling in general, going so far as banning it outright in town. The reason?  Traffic from people coming into town to gamble – one of the only reasons one would come to Black Hawk and stay for any extended period of time. No gambling, no Black Hawk. This ban was overturned by the Colorado Supreme Court, but Black Hawk has made it uncomfortable for cyclists to go through town, as they’ve made an out of the way detour that bicycles need to follow – you can’t use the main street, that goes right to Central City! Thus, cycling is still banned in most of Black Hawk.

I don’t necessarily like going through Black Hawk/Central City. You lose and gain a tremendous amount of elevation to essentially ride through the middle of a high-traffic area (ie:no payoff!)- an area that doesn’t even like you being there. But, if you don’t mind some gravel and a more adventurous route, there are alternatives:

A little ways south of the turn to Golden Gate Canyon State Park and HWY 119, is a gravel road called, Apex Valley Road. Follow it, to the next intersection – Upper Apex Valley Road. This road is also gravel – in fact: it’s gravel all the way to Colorado Springs. Ride on this road, until you hit a cemetery and hang a left on Bald Mountain Road. If you go straight, you’ll get on Eureka Street, and find yourself in Central City.

OK: here’s where things get a little interesting. After just aways, you’ll turn off Bald Mountain Road onto Russel Gulch Road , which itself seems to dead end into… a 4WD track! Take the 4WD track for just a bit, and it’ll connect you up with Virginian Canyon Road. Pay dirt!

Go South on Virginia Canyon Road, and you’ll be taken all the way to Idaho Springs on a beautiful switchbacked, shelf, gravel road with incredible views of Mt. Evans.

If you like riding on gravel roads, and a ton of elevation gain, this route is for you. I’ve done this ride on my Surly Crosscheck with 28mm touring tires, which worked just fine, except for the 4WD connector, everything is pretty well maintained. For the 4WD connector, I had to walk a few minutes. It’s neither the fastest, nor the shortest way to get to Idaho Springs from the N, but it sure is a lot funner than having to go through Black Hawk.

I sure wish I took this route on my 2014 Tour 14er ride, as it would have allowed me to ride a bit more dirt on my way to my last 14er, Longs Peak, as well as avoiding these two towns during a busy time of the day. It could have also been potentially faster, as I would have lost less elevation. My guess is that I can recon. a route that allows you to take even more gravel/dirt from Idaho Springs North towards Nederland and beyond, but I’ll have to wait until late Spring for all of that.

Looks intriguing. The one time I pretended to be a long distance cyclist last summer I ended up on Upper Apex when heading back towards Boulder (https://www.strava.com/activities/354703544). I figured I was completely lost so I turned around and went back through shoulder-less territory. Should have continued straight! Think you could take a road bike on the Apex route? I feel like I remember turning around because it was getting a bit rough for my roadie.

Justin Simoni as: THE LONG RANGER
Author
Reply to  Cordis

If you were comfortable enough with doing the Virginia Canyon gravel road outside of Idaho Springs, the Upper Apex Road would have just been more of the same: well-maintained. The only place you’d get in trouble with is the 4WD connector, where you’d probably want to walk it. It’s only a few hundred feet or so, so not a deal breaker in any way. I totally know what you were thinking though – I’ve been in this same area – rode up and down that same road and thought the exact same thing as you.

Personally, I think if you’re not hitting dirt roads while riding a road bike in Colorado, you’re missing out on some of the best routes out there. For example, so of my favorite road rides outside of Boulder are partly dirt: Sunshine Canyon, 4 Mile Canyon, Left Hand Canyon, Sugarloaf, Magnolia, etc. Sometimes that means modifying equipment slightly, like using a 25c or larger tire, but that’s been the trend of road bikes for a few years now (wider tires!) “Adventure” road bikes are a Thing!

[…] the last leg. It was a little later than I would have liked, but no bother, I guess. I utilized the gravel route that I mapped out a few weeks before  (just in reverse) to avoid Central City and Blackhawk – I had enough time in heavily […]

[…] was already pedaling up once again up towards Highway 119. I took a quieter gravel/4wd track detour I had reconnoitered this Winter south to avoid the not very bike-friendly towns of Blackhawk and Central City and found myself on […]