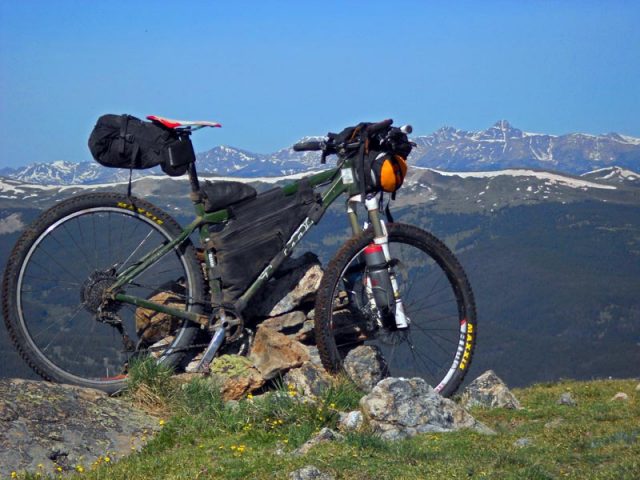 Took a little spin on the Colorado Trail – admittedly, the first “mountain” bike ride I’ve taken since around April – not that I haven’t been riding bikes, or riding bikes in mountains, but somehow it’s all completely different to some that it’s bikes on dirt, rather than pavement. To me: not so much. That happens when your primary mode of transportation is your bike.

Plan was to start from Downtown Denver, to Waterton Canyon (the start of the CO trail, proper), all the way to Camp Hale, then N. onto HW 24, left on Tigwon Road, all the way to the trailhead for Mount of the Holy Cross, where I’d meet up with H., who would have gear to do the snowclimb right up the Cross Couloir. In two days. Well, less.

Certainly a bold plan, but it was time to test my legs out, and see if I want to race this trail from Denver to Durango in the coming weeks. Made it to the Frisco Loft ‘n Jug (~ miles offroute) by around midnight – 120 miles later, after a 4:30am start on Broadway and Alameda, right downtown.

Didn’t think that was too bad, but couldn’t have possibly gone any farther. The next morning, I traversed over the Ten Mile Range, and started up Copper towards Camp Hale, but pulled the plug to instead opt to take breakfast in Copper Village. Insanely overprice, mildly underwhelming breakfast. It’s slightly unlike me to pull the plug on a ride, but I was thinking of my legs for the very next day – the snowclimb is no joke @ 1,200′ of climbing and shit can go wrong, if you’re not committed. I think the length of trail between Copper Village and Camp Hale – the next logical place I could be picked up if I didn’t make it to the trailhead, was around 18 miles. I had about, um: 12 hours to do that. Still didn’t seem doable: the legs said, “no” – what can I do?

Overall though, I was happy with the initial run to Summit County. Tons of climbing, somewhat unreal.

That same night, H. and I hiked to the campsites at East Cross Creek, after she picked me up in Frisco (I decided to ride back down the bikepath, after the successful traverse over the range), and bivyed for another 4:00am start – my third in a row. From her account, I was pretty out of sorts from sleep dep. I’ll spare you the details.

The next day started with attempting to find my spur into Holy Cross’s tiny cirque and the Bowl of Tears lake to then climb up the, “grassy” slopes to the start of the snow climb. The approach was incredibly frustrating, as there’s no trail, and the entire area is difficult to navigate – the area has the earned reputation of getting people lost, then killed, never to be found.

You can’t even see the couloir through the entire approach!

You just gotta sort of hope it’s all going to be in. And there. But, find it, I did, and climb it: well, sure. A little spicy, as it was almost July, but a wonderful way to cap off the snow climbing season, which for me started in May at the Southern most Sawatch 14er, climbing up the mild Angel of Shavano, and quickly testing my skills on a variety of snow climbs and Class 3 terrain, until graduating up on the Cross Couloir, on the northern most Sawatch 14er. More than I’d ever thought possible with a pair of hiking crampons.