Part 1 of an 8,000 word essay by Bryan Schatz (with illustrations by Matthew Burton) on my riding/art/tom-foolery leading up to and through the Tour Divide can be found in the latest issue of Switchback Magazine #10:

Pitch black and frozen in the snow- choked Rockies north of the border, and all Justin Simoni could think of was making it to the cabin.
He’d felt the frigid air trying to penetrate his clothes, watched puffs of his labored breathing illuminate and disappear in the night sky; he’d seen the Grizzly tracks stomped into the snow. 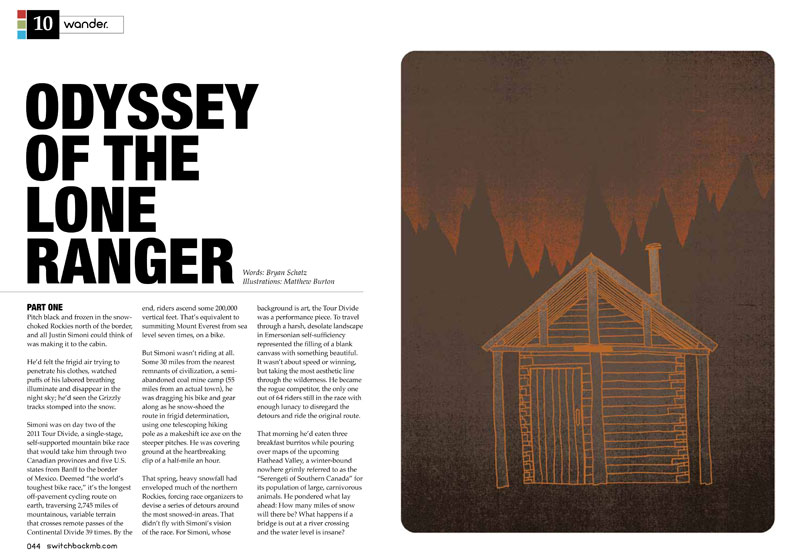 Bryan has also now made Part 1 available on his own site – I encourage you to check out the print/digital download from Switchback – I got my copies at the Tattered Cover, here in Denver.

Part 2 is now up on Switchback’s site

As always, I want to thank the people involved, especially Bryan Schatz for his interest, curiosity, and in getting in touch with me for the sit down interviews, as well as taking on the Herculean effort of shifting through the hours of recordings we conjured up.

I also cannot (will never be able to) thank enough all the people who have helped me on my wanderings, races and (mis)adventures, for without their help, I’d never be able to take on these crazy zen-like experiments on the bike, on foot, or in my head.