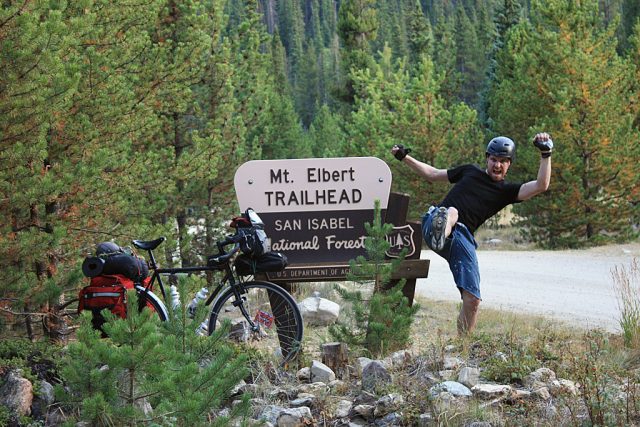 Summer totally flew by for me, but I was able to take a few little trips out and about to check out the, “backyard”. I’m moving soon, so it seemed like a good idea to see what’s out there. Here’s a small 4-day trip to Leadville and back, with a little side-step hiking.

Starting in Denver, we’re going South East on 285 to Leadville, CO, where we’re gonna climb Mt. Elbert, the highest point in Colorado. I’ve been scheming to do this for a while and finally found time to do it.

Denver is flat. Very, very flat, but just outside of the city limits, it gets steep. Fast. This wonderful road leads nothing to the imagination, unless you like pain:

Never did this road fully loaded. Some slow parts!

But, oh! is it worth it, as if in a children’s story, the mean ol’ High Grade Road, turns into Pleasant Park Road and what’s on top? A Cyclist Rest Stop! And unicorn sanctuary. What?!

A nice place to have a bit of lunch and take a load off (and a nice nap), you’ll notice the coolers in the background?

These are FILLED with water and Gatorade. To take!

They ask for donations to keep up everything, so I put a tenner in there and swiped a few things. Sweet!

This is basically near the top of the first round of mountains, and when you’re done with one, it’s time to go down a valley. On 285:

Just a rad sight to see.

Ended this day on the Colorado Trail at Kenosha Pass – 10,000 feet up:

Which, I think is right on the Continental Divide. There’s a campsite there – it costs $15 and I thought, “Nawww” and just rode a bit on the Colorado Trail and camped a bit off. Beautiful sleeping. I’ll have to come back and do the entire trail some day.

A good place to stop, as the next few miles are down the mountain pass, into a huge Plateau for the next, dozens of miles, it seemed. One little pass, before getting on HW24 at Buena Vista:

And North, all the way up to Leadville. Rode all the way to the Mt. Elbert Trailhead on day #2:

and, spent the night. Good sleeping, once again. The next morning, I ditched the bike under some wood and climbed up. Wake up time was 5:30 am, to avoid impending thunderstorms.

I found that hat, and that sign on the top. I’ve never seen some much… Stuff on a top of a peak, before. I left it there, as well.

Climbed down and cycled into Leadville, proper,

which is I believe the highest city in the USA. I ate a cheeseburger. It was delicious. There are beautiful women walking the streets. Le Sigh.

After lunch, it was time to head into Breckenridge, via Freemont pass. My knee was killing me, probably from the hike up, so riding was slow,

But, made it. Said, “hello” to my Bro and spent the night in Breckenridge, eating expensive ice cream on the main street, free coffee afterwards (thanks! Unsung Hero of Breck!) and OK Pizza later on. One of the best things about doing insane riding and hiking is the quest for food afterwards. End day #3.

Pretty place. Most of this was now downhill. A crazy amount of downhill, making good time.