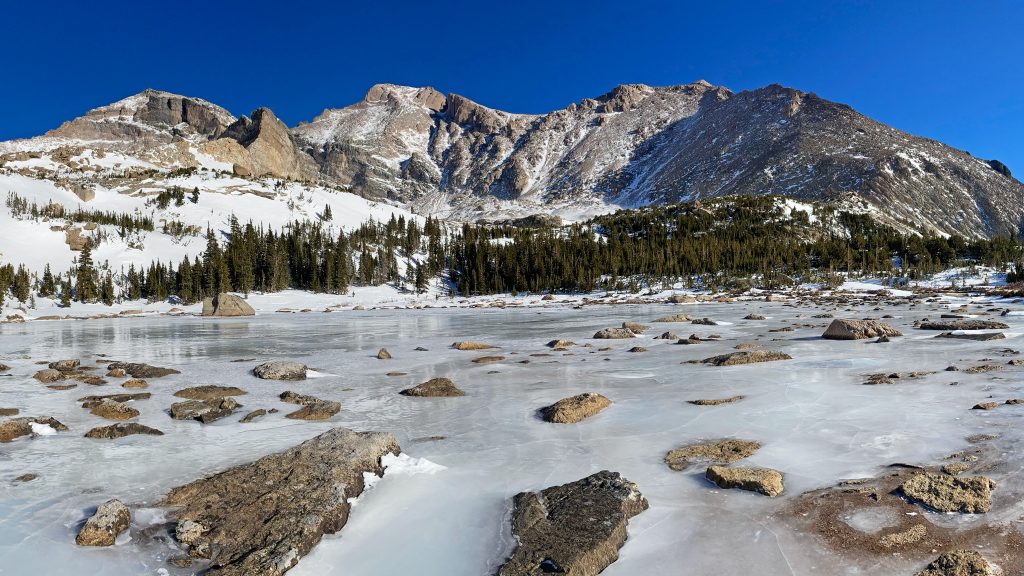 Had the intention of topping a V7 I had my eye on last time I visited the gym. It has a difficult move at the beginning, where you have to cross your arms to reach a tiny crimp. It seemed impossible, until it wasn’t. About an hour later, the rest of the problem was figured out. It seemed like a simple hike at the end – such a strange feeling.

Afterwards, topped another V7 taking just a few tries. Low gravity day. Worked on a V8, which starts out with a very high double dyno, but I was stymied after that, as you have to then campus on some pretty small crimps, which I just didn’t have the power for at the end of my session.

Three days in a row for me. A little night hike to check on the big cat tracks and tap the summit before a difficult three work days ahead.

Intense work days, so I didn’t plan any training, as I knew it would just contribute in me destroying myself via lighting the candle at both ends. Lots of snow and lots of snowing makes bicycle commuting in Colorado somewhat categorized as Crazy Guy on a Bike past times. But it’s not so bad, especially when you have a whole closet of mountaineering gear to bike-aneer yourself to the job.

27 hour day, 1:00am – 4:00am. I’ve now done quite a few Longs Peak Duathlons, and some in Winter, but I’ve tried at least three times to do Keplinger’s, having failed each time. Just a very long day, on terrain that’s hard to cover quick/efficiently, with a ton of gear that has to be brought (flotation, crampons/ice axe) all of which adds up in weight and complexity.

Despite quite horrible and at times dangerous snow conditions in the couloir (and above), I was able to summit and ride back without anything going horribly wrong.

The ride back (which I guess technically happened on Monday), was an absolute test in grit and determination. Having gone now 24 hours without sleep, having done 36 miles on the bike, and a 17 mile trip up/down a 14er, riding back to Boulder seemed perhaps beyond my current fitness level.

To add, I was seriously struggling with asthma-like symptoms – I’m guessing from some pretty obvious triggers: intense physical activity in very cold and very very dry air. Even though I’m going from ~8,500′ to ~5,000′, there’s still ~2,500′ of elevation gain to get there, and I struggled on each and every climb to simply keep going forward, without passing out, not able to breath. I may look into a heat exchanger mask, in hopes that this will help alleviate some of these symptoms.

If I find a moment (and find my brain not mush from sleep dep.), I’ll write a trip narrative.