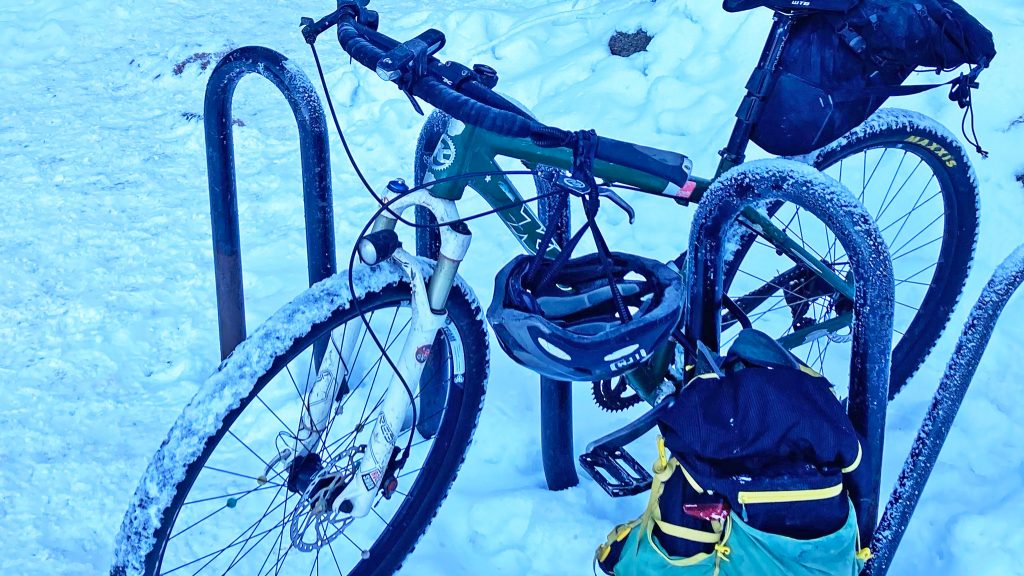 Finally sent a hard V6 I had been working on for a few sessions. The difficulty is the first move (for me) and the last move, which is certainly a heartbreaker. I don’t have send footage, but I do have a failed attempt – I fell simply trying the first move many dozens of times,

A small workout of squats and deadlifts. Working on proper form, so that I don’t kill myself.

Really slick in the morning – managed to almost knock myself out, as my face made contact onto the concrete as I tried to initiate an advanced stunt maneuver known as, “a slight right turn” while navigating the fairly advanced trail known as the, “HW36 Bike Path”. Ouch. Ouch. Ouch. Thankfully, did not lose consciousness, so work was done with only a slight headache and a lot of humble pie.

Bouldering at The Spot, 3 hours

I planned a small lunch session, but I had enough interest to keep going, that after I work I continued for another two hours. I am indeed now in the possession of not one, but two climbing gym memberships. Setting here is a lot different. A V3/4-ish problem will involve a difficult traverse to a dyno to a roof, then a dyno while on the roof, and various footless work reminiscent to the opening scene of one of those Mission Impossible movies. As the warmup.

Managed a few more V5/6’s in my two sessions. Left pretty worked – the setting seems in general more sustained, needing a ton more body tension to be successful. I’m not a fan of the textured walls, as the sand added really does a number on wearing down your shoes.

Another shaking commute on comedically slick bike paths – thankfully no falls on my face today. Ride home was relatively normal, albeit COLD.

Good session, despite feeling really stiff waking up (specially in my lower back). New problems on the fairly vertical walls, and I was able to figure out two of the V6’s fairly quickly, while a third was outside my reach, but doable, if I obsess about it (which… maybe). At the end of my session, I revisited an older V7 I’ve neglected, and made the crux move, which opens up the problem to actually being topped by me soonish, so I’ll probably just throw myself at that problem.

Later, I actually had a fairly complete weight training workout – probably the first such session in a good decade and a half at least. Started with weighted pullups. A goal of mine for 2022 is a decent front lever or some sort of close approximation. This may be a goal that is outside my reach, but it may be fun to try. I hear weighted pullups help with this, so here we go. Did a few sets of 5 with 25lbs, and a set with 60lbs, which isn’t bad. Next was a super set of benchpress and deadlifts. I worked up the bench to the stratospheric amount of 135lbs, which of course was my previous warmup weight. Deadlifts maxed out at around 245lb or so. Next were deep squats, which again got up to something very tame.

There’s still a ton of runway available to me to push these max weights to something far beyond what I’m showing here, but (1 I’m going to keep taking things slow to wait for an actual physiological change before I injure myself and (2 maybe I actually don’t have any interest in going much heavier, but rather would like to simply establish a base amount of strength for general physical fitness. As I grow older and greyer, it seems best to keep tabs on myself, and not let myself get too weak in general areas.

Buuuut, there is small part of me that would like to prove I can enter the 1,000lb club with bench/squats/deadlift, while also pulling a good weighted pullup, and uh: climb a 5.12 and go on a mountainous marathon trail run. It would at the very least make a good clickbait Youtube video.

First time out running this week! Winter has finally, actually gotten here. Snow on trail was pretty tacky and the temps fairly appealing.

Another lap up the hill. A little warmer then yesterday, but snow still in great shape.