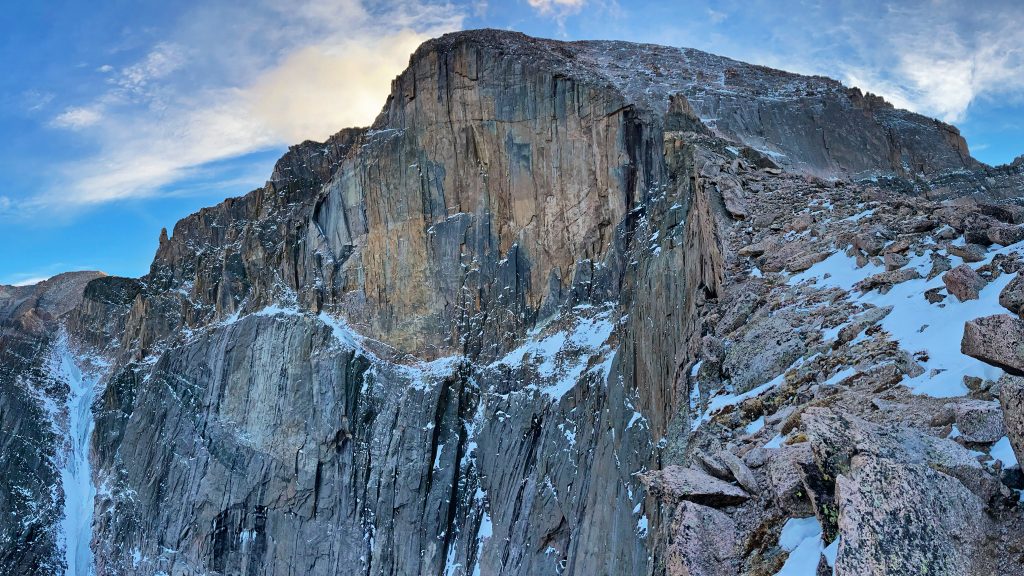 Been a little lax with keeping up the online training journal. This usually means something good, like I’m busy using my time for other things. But I enjoy doing it all the same. Although weekly, I’ll start with last Sunday, since it was a Big Day:

A good day out.

Fairly mild conditions, although quite windy on the bike approach – gave me a little pause and made me question of if the rest of the day would be successful. I carried a rope with me for the raps down Cables, even though it’s quite a bit of ballast to bring all that way. St. Vrain is closed for the next few months, which meant back up James Canyon/Overland Road, which I enjoy quite a bit, but St. Vrain is most definitely easier.

Quite dry up there, although my intended route, the Southwest Ridge, was covered in hoar frost, which made things a little more slippery than I felt comfortable to do alone/solo. Turning the corner at the top of the Trough and onto the Narrows, things turned much sunnier, and I spied that the East Chimney route on this aspect looked in good condition. I’ve done this route once before a few years ago, and was in the back of my mind as a likely Plan B for the day.

The Self-Powered Longs Peak Project is always in the back of my mind and that means strategizing which routes to do. Generally, it’s nice to have the easy routes: Keyhole, Loft – and even Cables, close to your chest, as they’re better to do when the weather gets sour – and that usually means deep in Winter/beginning of Spring. Use up your easy routes too soon, and you’ve got a lot less flexibility in what route to take during those difficult months. So for today, Keyhole route up Homestretch was not ideal, unless I was trying out of options.

Anyways, East Chimney was great scrambling, and I super enjoyed it. Didn’t take too up too much time up front, and getting down was relatively pain free. Didn’t even take out my crampons for the descent down – which is good ’cause I didn’t even bring any! As I wrote: quite dry up there.

The ride back was relatively straightforward, but it very much dawned on me how little I’ve eaten, and I knew I was in danger of bonking hard. Thankfully, that didn’t happen.

Not much. Commuting to work was a little trying, but 20 miles total was ridden.

Redemption! After allowing a little recovery from Sunday, I had a super strong day at the gym, highlighted with finally topping out a V7 I’ve been trying for over 3 weeks. V7 is a tough grade for me to do regardless and this was my first time getting one on this steep angle. Not bad for a runner/cyclist!

Afterwards, I then topped a very tricky V5, and then was completely wiped for the rest of the session, being unable to get up nothing else, no matter the grade.

A quick trot up some easy formations. So warm!

An easy day getting on some easy stuff, trying to remember what sport climbing is all about with Nolan. Fun time! Really tired from Thursday.

Nice jog from Leighigh to the turnoff for the Matron. Goal #1 was to find the climbing trail to the Matron, as I’d like to climb it soon, but don’t like wasting time with the approach. So, that was easy enough!

The next goal was to summit South Boulder Peak. The last time I was up in this area, I noticed a talus field that seemed to start in back of the Matron, that went up to South Boulder Peak, that was south of the standard route – maybe a little scrambling on the south ridge proper, but not much.

Well, it actually turned out to be quite the day. It quickly dawned on me that I wasn’t actually anywhere near the summit of South Boulder Peak, but very far down the ridgeline itself. There’s not a lot of information on this ridgeline. The original Roach Flatirons book makes note of the ridgeline, the most recent does not, and there’s no mention of it in the Haas route. There is documentation of a few trad lines on the ridge in Levin’s Eldorado Canyon book, which is strange, as it’s not really in Eldorado Canyon SP.

After hiking up a talus field, and negotiated some dirty slabs, I found myself near The Veil crag, which is the most southerly crag on the ridge, save for Shirttail Peak itself – the first major high point of the entire ridge! Woo boy, I was in for a day.

The scrambling on the ridge was mostly excellent, and not wanting to do too much actual climbing in my Mutants, I looked for sneaks. Physical Crag had a great, airy sneak on the west side, Diamond Head could be traversed along the south and north ridges. SoBo buttress also had a nice sneak to the west, but I bet you could traverse the ridge itself if you wanted to. Getting on may mean dropping down a bit to actually get on the southeast ridgeline – I’ll really need to do another recon. Really cool climbs that caught my eye on this formation.

Finally, just before sunset, I was able to make the summit – hurray! I’ve been meaning to do this ridge for forever, and it was nice to get a good majority under my belt. Now, to start with Gambit/Shirttail Peak, and take it from there!

A more pedestrian day – a quick jog up to Freeway, a quick scramble up, then kept on the accelerator to the summit of Green. Took the Gregory Falls route back to the Gregory Canyon TH, then a jog back to the trailhead. Happy to get some faster miles under the legs.