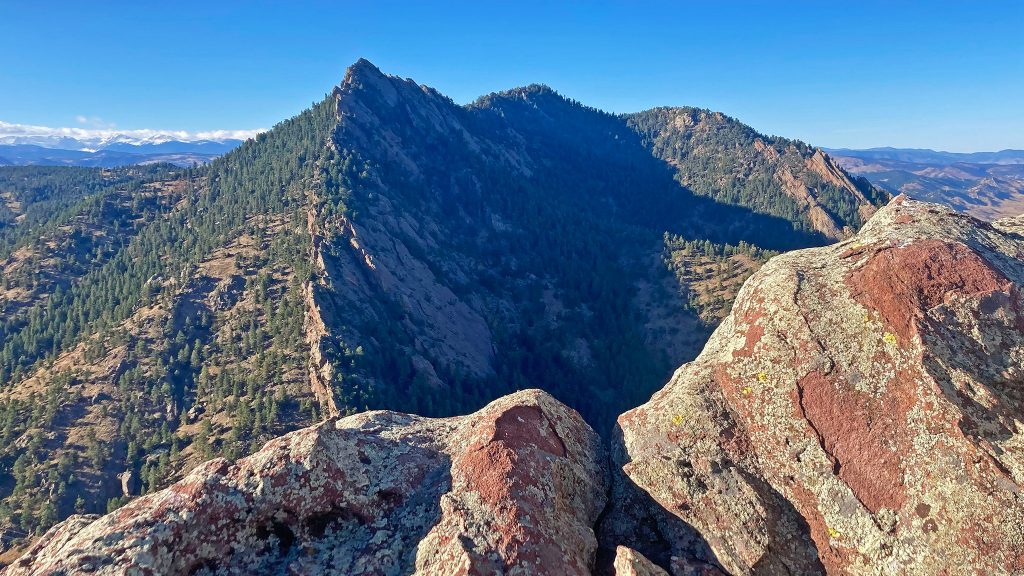 Most of the tracks failed to record properly – whatcha gunna do? This was my ~42nd summit of Longs Peak with an approach by bike. First time using the Blizzard GTX‘s this season. I brought microspikes as well, but I’m pretty stubborn about stopping to put on/take off those things.

Worked on a fun V5 I thought was going to be a flash, but I couldn’t even do the first move. Most of us working it couldn’t either. Intrigued.

Goodness it was windy and cold. Warmed up on the Second, to see how chilly things were on the pointy rocks exposed. Pretty cold! Decided to go for the Third anyways, as I didn’t think I was going to get blown off. Someone was rappeling off what looking like dental floss and that gave me pause. Found (FINALLY) a better line up from the back of the Third towards the summit of Green Mountain – made my day.

Worked on that really interesting V5 – the first moves came easy thanks to my neuromuscular connections getting tuned for that one move, then I found a good drop knee to sneak in for a hard (for me) reach to a side pull. Did a weirdo V6 which felt committing, but altogether pretty easy.

Despite my best attempts, found myself drawn to that slabby yellow V6 with a ton of pinches I’ve worked on many a session. I almost sent! Def. a highpoint, but just when I was going to go for the top, my right eye contact popped out, and it was a decision: do I finish the problem, or safe the contact? I chose the latter. Finger pads were absolutely destroyed.

Colder still was Friday. I had a full on sweater on most of the time. Decided to go up and visit Nebel Horn since it’s been a minute, then planned to go down the north side of Bear Peak cross country to see what that’s about, then maybe linkup Dino Mountain with S Green Mountain/Sacred Cliffs – who knows you know? There’s also a small crag near Nebel Horn called Mars Block with milk chocolate candy-theme route names, and what’s not to like about that?

Summited Nebel Horn – goodness that summit would make a great bivy spot. Had to search a bit for Mars Block – it’s a bit lower/closer to the trail then Nebel Horn and I had bypassed it on my way up. The 5.easy routes I got on were barely worth time to investigate, but I found some fun attempting the Snickers Dihedral, which I absolutely could not figure out, even though the grade is a modest 5.5. I looked to climber’s left and thought there could be a line, which I took some time to boulder out. It went and for a second I thought maybe that was the Snicker’s Dihedral route, but it sure felt harder than 5.5 (more like 5.7). Back home I checked the Haas guidebook and found the route to be, Three Musketeers, 5.7.

Burned a ton of time working on that, so I reckoned I had just enough daylight left to get down to the (closed) Bear Canyon trail, then out from there – but first a visit to the Devil’s Pinkie – because why not? I took a pretty steep/loose line down, trying to follow the craggy ridgeline that winked in and out of the trees, and found myself in questionable terrain. I slipped, finding myself rocketing down the gully out of control. The feeling of the landscape whizzing by reminded me of catching a wave surfing or something like that. Thankfully, I fell feet first, and didn’t take a tumble, but the fall seemed to take so long, I got impatient about when one of my legs was going to snap in half so I could get on with the business of crawling out of this area, Touching the Void-style.

I eventually did stop, and giving myself a once-over, seemed all together alright. Legs could bear weight, although the right ankle felt a little less than perfect – maybe I broke that? Seemed prudent to get down the slope in the fading daylight but – well: I was so close to the Pinkie, I needed to summit it! Which was quite a sight, using one good foot and one out-of-order foot – but I did it!

With the adrenaline worn off, the foot still felt pretty alright, but perhaps with an eversion ankle sprain (self-diagnosed) or a fracture of one of those tiny bones around the middle. Regardless, I could bear weight alright, so I worked an event where I’d be standing/walking all day and survived that.

What really hurt though, was the rest of my body, which felt like I just got hit by a truck. I brought gear to bring to the climbing gym – always the optimist, but once I got there, my body refused to do most anything except lying down and some easy stretching. Fair enough, body! I stretched, did some core work, did some ankle PT, some hip PT and generally tried to check in with my body.

Somewhat of a repeat of yesterday, but I did a very easy warmup bouldering up to V2, wanting not to put any weight on my ankle what so ever. Once I felt warmed up, I went upstairs again for more stretching, ankle + hip PT and some pretty brief back/forearm work. I started with strict pullups, then did some very light hangboarding, then did some campus board work on only the first two rungs, with a ton of rest between sets. If I can’t do my bouldering sessions, I may do some campus boarding for a while – there’s a lot of things you can do using the first two rungs that’ll challenge me. It’s f’n boring, but I’ll have to be patient with this ankle/foot problem until it feels like it’s on the right way of getting stronger.