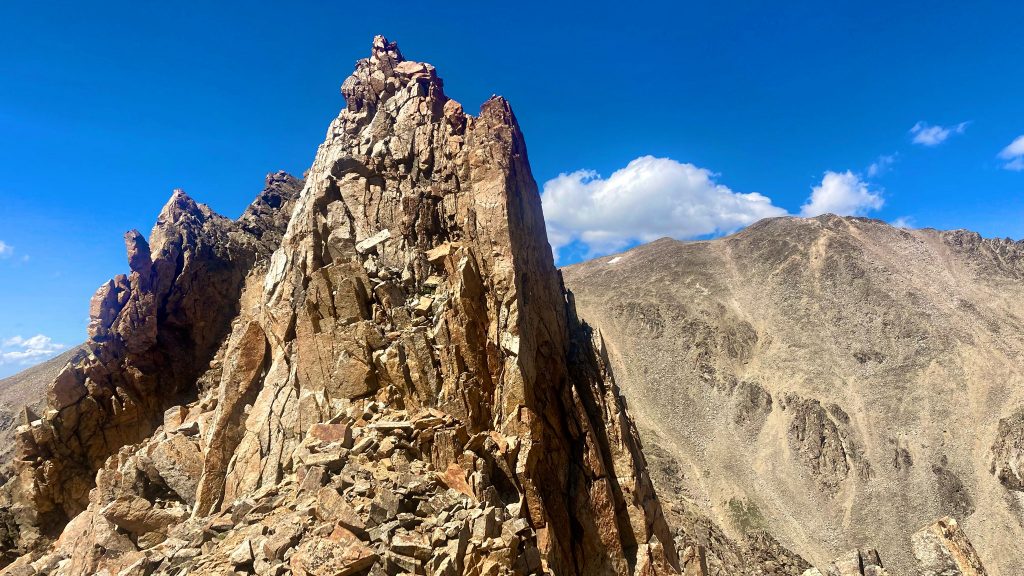 This covers around 3 weeks! Lots of fun projects happening, so I at least wanted to put these trips in note-form, to make recall a little easier. I’ll miss a lot of gym time, since – hey: it’s just gym time.

I needed to get out of my usual routine, so I rode up to NCAR, and did some light Skunk Canyon scrambling. First up was Stairway to Heaven. I managed to get stung 3x by wasps in the face/back a full pitch up. I apologize for the loud screaming – I’m in fact alright. Glad I didn’t fall off. A good scramble regardless.

Up next was Angel’s Way, which is probably the better of the two ridges. Afterwards, I cross-country’d it to the summit of Green, then took Green-Bear/Bear Canyon back to the trailhead.

Bus was a little lake rolling into Alamosa, which cut into the already rare daylight I had left. Thankfully, I was only on the main highway (which does have a nice shoulder) for a little while, before I exchanged it for a series of gravel roads up to the start of Lake Como. Really enjoyable.

Lake Como on the ECR wasn’t too bad, but I was certainly heavier-in-gear than the last time during my first Tour 14er. Made it to my bivy at around 3:30am or so. Oof.

Got a tremendously late start for what I wanted to accomplish – happens when you lay down at the same time other people are starting up! Took the West Ridge direct up Little Bear, which was really a ton of fun. Did the Little Bear/Blanca Traverse for my fourth time – damn if I didn’t take a wrong turn at the last major tower – I feel I always make that mistake!

Once on Little Bear, I dropped down (on a trail!), to grab some water at the very tiny snow patch/Blanca Glacier, then up and over Ellingwood, and down the C2 Couloir into the Zapata Creek Drainage. Quite the adventurous 7.4 miles! I was spent.

I was happy to finally have figured out where the C2 couloir off Ellingwood is, as what I took on my last attempt wasn’t quite as… useful. Bivied down without a tarp and of course at 1:00am it rained on me. The tarp went up!

Once up, I kept trudging back down the trail to do some recon on California’s West Ridge route. I’ve done it before, but only on a descent and I lost my way on the actual trail, so it was worth checking out again – glad I did!

Bopped over into the Huerfano River Drainage towards Lily Lake via the Southeast Ridge of California. Not great, but doable. Really happy to have enjoyed a little break at Lost Lake, before heading down to the trail.

My next stop was to be Gash Ridge, but I was really second guessing myself that I could actually access the main ridge from the Lily Lake side of things. I dropped down into the basin itself (rather than camping at Lily Lake) to make camp. From there, the route looked doable. One way to find out! Really wonderful spot to camp.

Such a good day! Woke up early enough a traversed back to Lake Como via Gash Ridge. Gash was excellent – nothing too difficult, but plenty of exposure.

I actually was trying to forge a path to Crestone from Lake Como Road NOT using the highway, but I kept hitting against the Wildlife Preserve that’s out there. I could have easily jumped the fence (and onto a road!), but legally that would be uh: illegal as far as I could tell.

I also failed a resupply at the Sand Dunes Oasis, which was either not open at all, or closed earlier than I anticipated – and oh: was I anticipating some badly grilled burgers (plural). Such a bummer. Stole some water at the bathroom up the hill a bit – the caretakers of the motel were oblivious on how to help a thirsty traveler. I couldn’t even get them to break change for their Coke machine! Deflating.

Got good beta on the free albeit buggy campsite near San Luis Lake (with hookups!) wandering around – and a little bit of shaving off highway riding towards Moffat, but no grand route could be established unfortunately. Also the diner in Hooper is indefinitely closed – a big loss for sure.

The highway riding I did do into Moffat had a pretty good shoulder all things considered, and the highway was newly paved! I bailed on my plans to go to Crestone, and just hightailed it home.

There is another option to go from the Great Sand Dunes to Crestone via what’s called “Liberty Road”, but this road is more idea than road – even with my plus size-tire’d bike, it would have been a lot of hiking. With the screwup of wanting to take Mosca Pass earlier in the week, it was quite the bike riding adventure of misadventure. More wandering needed to be done in the future.

Well, I tried to, but the bus from Salida to Denver didn’t have a bike rack, so it was a 0 day for me in Salida. Things could be worse! Went to my favorite coffee shop in town (Cafe Dawn), visited Oveja Negra and grabbed a new bag for the Salsa Journeyman, and hung out with the thru-hikers at the Simple Lodge

I took a good rest – I probably went to the gym a few times, but kept off the legs to properly rest up for my time pacing the Leadville 100. Unfortunately, my runner didn’t turn up at Twin Lakes to continue before the cutoffs, but I had fun hanging out watching the spectacle. I camped at the beginning of Willis Gulch trail for the next day’s adventure.

My plan for the morning was just to hike Hope via the northernish ridge, then call it good. Got a nice resupply from the Llama caretakers near Hope Pass, even!

Once on Mt. Hope, the ridgeline just look too delicious not to indulge all the way to La Plata. No real issues were found until right before getting to La Plata, where the ridgeline turned into a dizzying array of pointy gendarmes and my pace slowed to a crawl. This wouldn’t be all that terrible, but I was running low on food and water – on my person, as well as back on the bike, and I needed to get to Twin Lakes before it closed.

After the 13+ miles to La Plata, it was almost 5 miles of trails down to the highway, and yet another 6.25 miles of road running back to the bike. I did my best to run the road as fast as I could, but damn if the frontside of the day did me in and I had to walk with purpose a few miles.

I made it back to Twin Lakes around 8pm – everything was nice and closed. I couldn’t find any water, either and made the questionable decision of just continuing onto Leadville, knowing nothing really is going to be open there until the next morning. Not drinking any water for about 10 hours didn’t seem all that attractive, but I didn’t know what else to do – I was planning to be touring – just pacing Leadville, so I was pretty ill-prepared. I even sunk so low as to (*gasp*) ask someone camping if they had water (they didn’t).

Thankfully, The Trail Provides, and I found a bottle of water tossed on the side of the road the quenched me enough to continue to Leadville. I made two short bivvies – one past the South Elbert Campground, then another near Halfmoon Road. Happy to have reconn’d the backway to Leadville, so all my night riding was off highway.

I rolled into Leadville not too worse for wear – and with enough time to grab a coffee and many baked goods from City on a Hill before grabbing my bus at 7:00am (note: that you can’t take a bike on the Leadville bus if it’s before sunrise/after sunset)

I don’t have anything recorded for today – guess I rested up!

And the Third Flatiron is finally open! I did a tear of a lap up it – I was so excited! Then did the usual bushwhacking route up to Green Mountain.

Hiked up Green Mountain with my lady. It was her second time ever up Green, but I believe her first time up was from Realization point, so leveling up for her. She’s hoping to do the skyline traverse, soon!

Pretty much a repeat of Wednesday, albeit more wandering getting to Green to find a better line (didn’t really). It’s slow going getting up to the Green from the Third. Jaws kinda gets in your way. Maybe I’ll jog left rather than right, but then the Ironing Boards get in the way. Tough terrain!

Did three laps of the Third, then when jogging down the trail, the A7 boulder was actually without a completely aggravated boulderer trying their best (and failing) on Captain Hook, so I thought I’d give the ol’ V1 line another go. From the arete, I was able to get to the top relatively easily, so I tried from the start, and it went just as smoothly. Send!