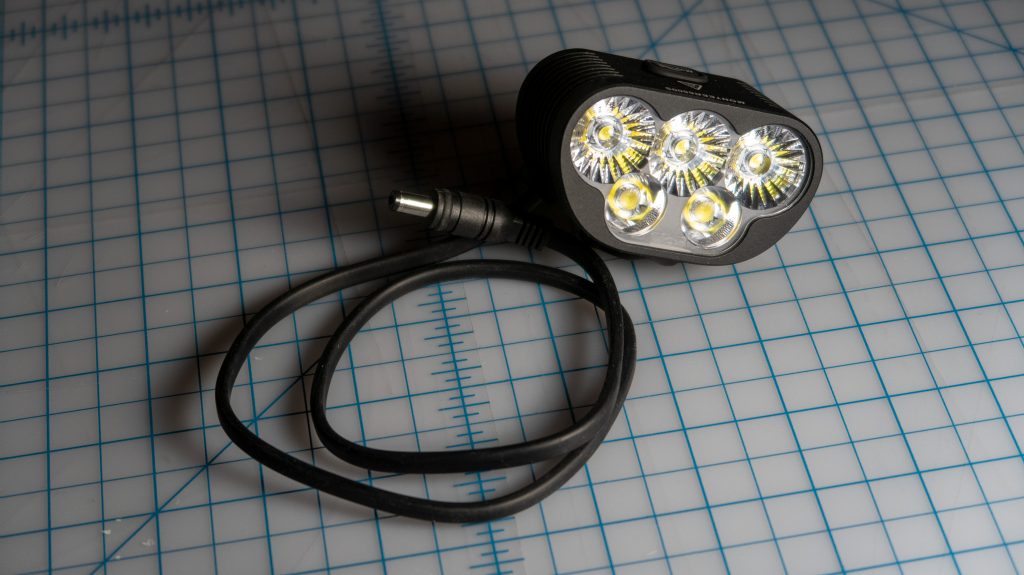 I’ve used incredibly bright lights, but the Monteer 6500S Zeus by Magicshine.us is in a completely different class! Pushing out a max of 6500 lumens, this light not only betters any other bicycle light I’ve ever used, it rivals many car headlights!

I’ll be using and testing this light in the coming weeks and sharing what I’ve learned. Make sure to follow me:

to be notified. This post will be going over what you’ll get in the box, and some commentary of the what and the why of things.

Here’s links to the light, as well as its replacement parts and accessories:

Or just visit Magicshine.us to see all the lights available – if you use the coupon code, longranger at checkout, I’ll get a little kickback – which will be used for burrito purchases almost exclusively (yum!).

Having so many replacement parts available is almost a feature in of itself. This bike light is not cheap, but knowing there’s parts available helps with thinking of buying this light as a wise investment.

Magicshine comes out swinging with the light unit itself, feature five separate LEDs, and two different lens designs – three floods, two spots. The brightest lights I’ve used in the past have maxed out with two LEDs, so five is a huge jump in how much light is thrown out – if you aren’t convinced this light is in a different galaxy then other bike lights, here’s your big hint.

The unit itself is fairly compact, given the amount of lumens it pushes out, measuring 72mm x 42mm x 44mm – it doesn’t take too much space on the handlebars. The mount also facilitates this, which we’ll get into later on.

One button is found on the top of light and pressing it will turn on the light, cycle through the various brightness and blinky settings, and turn the light off. The button will somewhat grow green when the light is on – this effect is very subtle. Various light settings can be accessed and cycled through clicks and double-clicks – the spot/flood lights can be run independent of each other.

The light case is made of metal to help dissipate the heat this pup will also put out, as well as help with durability. The 6500S is made for riding singletrack, so a crash is inevitable.

The bottom of the light has a Garmi-style mount, which is one of its standout features in my opinion. This mount is also replaceable, protecting your investment for many rides to come – you’ll just need a hex wrench to undo the bolt on the bottom (included!). This also means any Garmin mount you already have installed on a bike is compatible with this light, so switching the 6500S between bikes is easy to do.

Finally, you’re find a cable running out of the bottom right hand side of the light itself. This cable then connects to the battery pack. There’s no additional user-serviceable parts of this light – you can’t easily open the unit up, so if this cable does get damaged, you may have to talk to Magicshine’s customer service for help. The cable itself seems to be up to the task, but I would be careful when using and storing to not inadvertently damage it.

This battery is a monster, and encases four 21700 lithium batteries within. I don’t have any other light that uses these batteries, so these are new to me. Regardless, there’s no easy way to open the case, so you can think of it as a big black box of energy, as that’s what it is! The battery is going to need to be either attached to your bike frame somewhere (straps are included), put into a bikepacking-style bag, or carried in a hip pack, if you decide you want to run this on your helmet (helmet mount sold separately). It’s not light at 388 grams, but for what it does, it certainly makes complete sense as to why it so large. Magicshine rates this light as having a runtime of only an hour and a half at its maximum, 6500 lumens; but 40 hours at the lowest, 300 lumen spot-only setting. That’s an incredible spread.

Here’s what Magicshine releases for the 6500S power modes and runtime:

I’m excited about both the max lumen setting – as running into an errant bear on some rocky singletrack in the middle of the night is a worry I sometimes have, as well as the max runtime setting, as 300 lumens is usually enough to get me through less technical terrain (or just grinding up a hill) while on a bikepacking trip.

On one end, the battery has a USB C port for charging, a button to turn on the battery (with battery charging indicator), and a port to plug in the cable to the light itself. I’m happy they chose USB C, as a micro USB port seems to more easily get damaged. Magicshine lists it’ll take 9 hours to fully charge the light.

The 6500S comes with a Garmin-style handelbar mount, made of aluminum. Two separate rubber spacers are also included, to help fit handlebars of various dimensions. Most contemporary road/MTB handlebars should fit fine. This mount is very similar to other third-party Garmin mounts – and it is dual-sided, so if you want to run an action camera on the bottom, you’ve got that option. The arm of the mount is not all that long, but will get your light far enough away from your bars to clear them. You could get a longer arm mount, but I’d be wary of putting this light too far out, as it’ll increase the likelyhood you’ll damage it in a head-on crash.

The Magicshine 6500S does come with a USB C cord for charging, two straps to attach the light to your bike frame, and a small hex wrench to switch out the Garmin-style mount. And that’s just about it.

So I am really curious about this light. The brightest light I’ve ever used for an extended amount of time had a max brightness of 1800 lumens, and that could only be activated for a few seconds. This light can do around that lumens for hours. Since I’ve never experienced that sort of lumen power, I’m not quite sure what I’d use it for, but I can say that I’d rather have the option of a bright light in specific situations, than not.

As someone who does a ton of night riding, the Magicshine Monteer 6500S could be an incredible ally to a successful night cycling mission. I’m looking forward to putting the light through its paces.

What about you? Have you ever thought about replacing your current bike light with something far more powerful? What’s your opinion of such a light? Leave your comments, below.