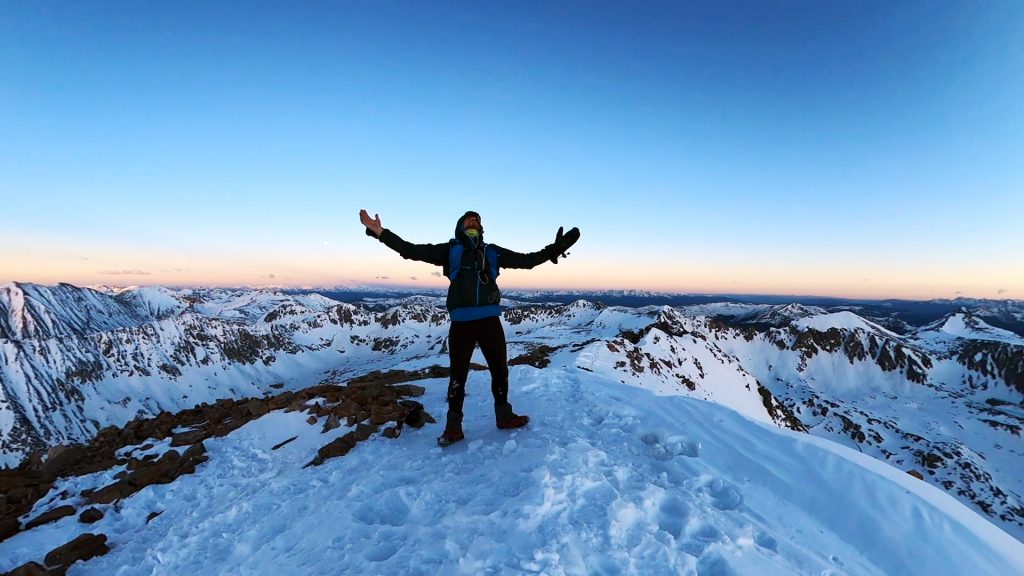 Sunday’s effort was worth a little rest.

Nothing special to note – just crushing it in my mild manner’d way, like ya do.

This day did not go as planned.

I had my sights set on climbing Quandary, but thought it would be better to approach it from the south, with a bike ride over Hoosier Pass – maybe even bivy on the pass for the night. The ride from Fairplay is slightly shorter than from Frisco.

Well there I was, waiting for the bus to arrive, and when it did, it was a stand-in short bus for the main bus that must have been broken down. No place to put a bike on, so I was stranded in Denver, except that the Bustang to Frisco left in an hour. Biding my time, I ate a burrito, waited for the bus to come, and got on that one.

I lost a few hours with the change of destination, but decided to just ride to the TH anyways – the free bus from Frisco to Breckenridge left about 30 seconds early without me on it, and my attempts to catch up with it on a subsequent stop were… cute. Ride to Breck was fine; someone had a real problem with me on the road right after Boreas Pass – I don’t know what their problem was – but maybe a nice reminder to not be jerks riding bikes. Some of us are nice people. Bivied for the night for a very early start (1:30am?).

Terrible time trying to sleep – the wind and my worry that one of the giant ponderosa(?) pine trees kept me up. I actually delayed my wake up time by ~hour because of the wind. But when I did get up at 2:30am, the main wind event seemed to have subsided, and I seemed to still be alive.

Trudged up the east ridge route of Quandary. I had the idea of doing some laps until I couldn’t – if not for conditions of the trail, then conditions of the body. Timed the rising sun almost perfectly, and what a show I was greeted to – goodness. Snow was firm and I only donned my microspikes for the last 500 feet or so.

Heading up my third lap, I knew I was in for some trouble. I started to post hole in a few places going up, then going down it was a disaster in the bottom half of the mountain. I decided to call it at three laps, then nap the rest of the day at the trailhead, and then again at my bivy site on McCullough Gulch Road, before calling it and going to bed.

Good training at altitude. I slowed down quite a bit on my third lap, but I’m pretty confident I had another one in the tank, if it weren’t the snow and not wanting to hurt myself postholing and then tweaking a knee. But hoo boy – that last lap above 13,000′ was really difficult. It seemed that the limiting factor was my breathing – that I just wasn’t acclimated enough. That makes sense – I haven’t been to altitude since I think March, or the last day of February. The longer you are at effort, the faster your heartrate is for the same amount of work done and I just finally went over that line of what I was able to do before redlining it. Or that’s my theory – I didn’t have a HRM on or anything. Good chance my lungs were closing down a bit, too.

Got up with enough time to sort gear, and ride to Frisco. It’s mostly downhill, so a nice leg stretcher after yesterday’s buffet.

I mean, why not. Felt pretty wrecked, but nice to get an easy session in. Call it practice with movement when tired/skills day, but ultimately felt better afterwards than before. Body was certainly sore and inflamed, but I was somewhat surprised at how well I could do. No real sends to report, though. Although the Chunky Monkey I picked up afterwards was quite tasty.