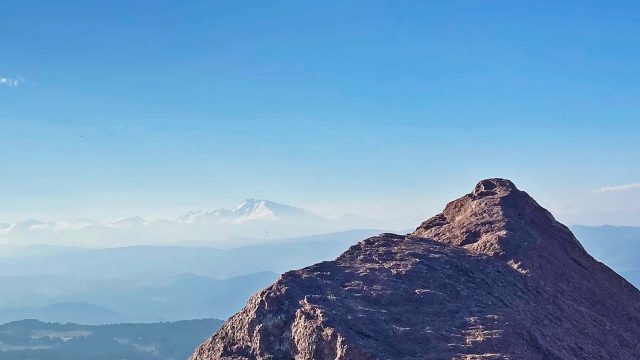 Although the sky threatened, I kept fairly dry. Did the usual route up to Gregory Pass, below the First, then up behind the First to the summit of Green, then down Greenman/Saddle/Amphi.

Second lap started up Saddle Rock. then off to the waterfall, across the stream to the lookout to the much higher waterfall and then taking the ridge straight to Saddle Rock. Didn’t know how well that was going to work out, but it’s easy enough to avoid it fully to the west. Rock was too wet to wanna scramble anything, and the rock quality on that thing is pretty dire. From there, I took the NE ridge up.

Going down, I took the NW ridge, until the old homestead, then took a NE-facing ridge down to the creek and took the rest of Gregory Canyon trail back, once my deer trail wandered back to the singletrack. That choice was… interesting, but I doubt I’ll repeat it anytime.

Potentially was going to do another lap, but the skies were getting a bit dark, so I bailed on the idea, deciding not to press my luck.

Haven’t been up Shadow Canyon in a bit, so thought that would be a good goal; then if I had it in the tank, I’d tag Green. Seeing that it’s not all that much more work tagging Green than not, it seemed a given – what wasn’t a given is if I had it in me to run up, rather than just walk up with purpose.

Jog to Shadow went well – I was a little amazed I even could given how low my self-confidence in being able to actually trail run is. Unbeknownst to me (or I just forgot), OSMP has been very busy realigning the trail after Fern Canyon – and before that, a lot of the muddier sections have decking to them. So a nice – dare I say: buff trail to Shadow!

Related:  So where the Hell have you've been, dude?

Somewhat rare in the park system, although becoming the norm with all the new trails that are of much gentler grade. I’m a fan, as I’m usually on Mesa to get somewhere else. The only peculiarity is the trail’s very friendly proximity to some boulders that must have problems on them. To set up to do the boulder, you’ll have to put a pad halfway into the trail!

Once at the junction by the old shack, I filled up about 7 liters of water, to make the hike up Shadow more of a weighted carry – Shadow is steep enough to make this work. Shadow itself was a little magical – I had forgotten just how many huge boulders there are right off the trail! Including that gigantic one, with the immense offwidth crack on it! Lots of chalk marks to looker’s left and some old branches there to build a platform, but I don’t know the name/grade/etc. The canyon was also nice and cool.

Over too soon, though and before I knew it I was huffing up Sobo, getting past by chatting trail runners who weren’t carrying 15 pounds of water with them. Bear next, then I dropped the water, and made my way over to Green. Surprisingly again, I had the legs to make it slowly towards Green without breaking into a pathetic walk. I was sure that my legs would be tired from the weighted carry. The newish West Ridge alignment is – much like the Mesa Trail work, much more buffed out, and of an easy grade, so my ego was once again saved from a premature bruising when I reached it at the end of Green Bear. Usually, I try to run up the West Ridge as much as I can before quitting. If I make it to the junction with Ranger, it’s like winning a prize or something. This day, it was a given, but afterwards, I broke into a stride to make it up all those steps.

Down Greenman/Amphi/Saddle, then to Chat.

Worked on a few problems I’ve worked on before. Felt pretty tired from the run the day before. By the end of my session, I actually felt nice and well warmed up, but the place was closing.

Nolan was game to do a scramble, so we went to The Spy, to check out the climb, 007. It’s a nice climb, but over far too soon, and quite the hike for all the gear to haul. Still a nice recover wander. I’m a very slow learner, and really am still building up my personal confidence of climbing on gear – there was a bit of break in climbing outside because of something or other last year I forget just what, as well wanting practice in making belay anchors that will not kill me and my partner. In the Flatirons, this is actually no joke, as rock features that actually accept gear can be few and far between.

As you can see below, the route eats up gear in its cracks, and lucky for me, there was a nice crack to make a textbook anchor for. Once Nolan was up at the anchor, we just both untied, and I threw the rope down to the base, and we scrambled the rest of the Spy before grabbing our stuff for the long hike out.

Once more unto the breach, dear friends. It’s been a hot minute I’ve done more than three summits of Green in a week.

Unfortunately for me, I’ve been dealing with a sprained ankle, so neither Sat. nor Sun. saw me do a long something or other, but I thought I’d sneak in one last hike in – this time hauling 10 liters of water (~22 lbs), to get an honest workout out of it. I took a pretty directly line on the south side of Gregory Creek, then up to Saddle Rock, the to the NE ridge. The day was threatening precip. since I started, much of the mountain was wet, and it was snowing very lightly at the summit, but I kept fairly dry. Descended by reversing the route.

RT of 3.9 miles is getting about as “direct” of a line up Green as one can get. (Very) roughly halfway up, there’s a bit of a shelf in the mountain, that you just can’t avoid – but this route does keep that at an absolute minimum. The flattest part is coming out from Saddle Rock, and taking the actual trail for a hot minute, before disappearing up the NE ridge again.