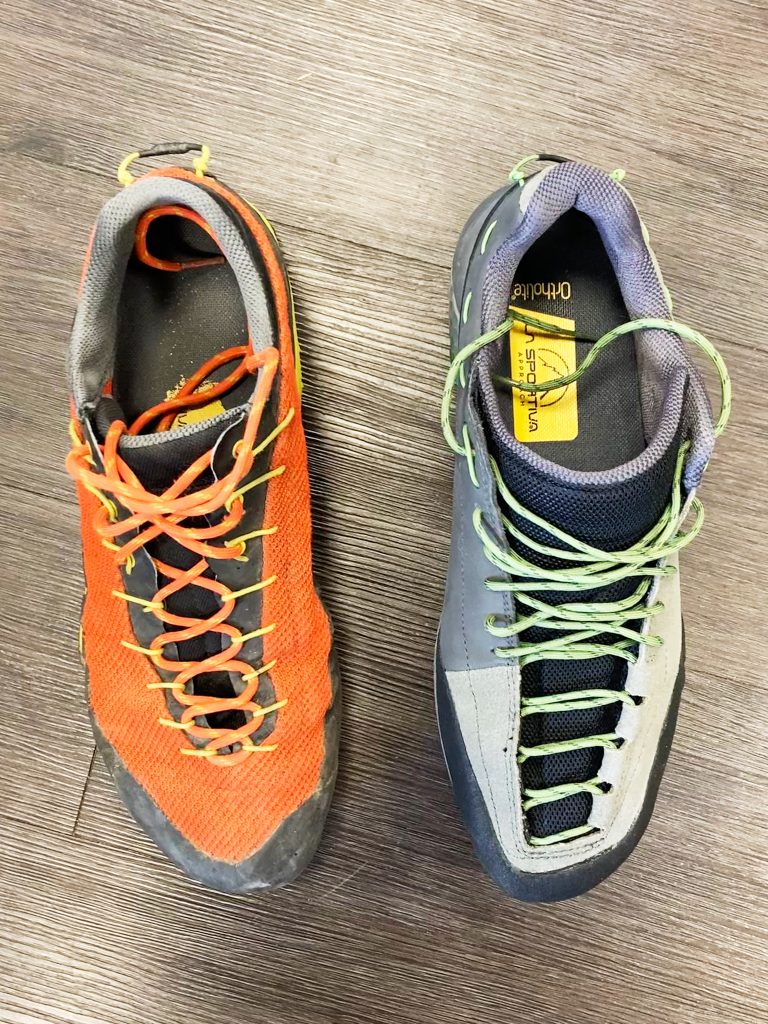 I was picking something up at the La Sportiva Factory Retail Store (the new Karakal!) after climbing, and finally had the opportunity to try on the new TX Guide Leather. I’ve been really interested in the new TX Guide since seeing them at OR, but even just holding the display shoe in my hand, I knew right away it was going to be too narrow for my foot. So enter the TX Guide Leather, which has a redesigned upper.

Leather may stretch a bit compared to a synthetic, but these uppers are still lined, so I’m not betting that after an initial break-in period, they’ll stretch all that much. What they do have is an entirely redone lacing design – the laces go very far down the toe box, allowing one to open the front of the shoe quite a bit. If you’re familiar with the La Sportiva TC Pro climbing shoe, similar idea. Even with my not-so-narrow feet, I can wear the TC Pro if I just play with the lacing a bit.

So here’s some comparisons, between the TX3 which I happened to have on at the time, and the new TX Guide Leather. Both shoes are a size 45. I usually wear size 44 Sportiva climbing shoes, and size 46 Sportiva running shoes. I have a D-width foot:

First, side by side – to me, they look fairly similar in length and width – and notice have far the lacing on the Guide Leather goes down in comparison:

Outsole facing each other, they do indeed have a lot of similarities – more so than differences. These are rough measurements, so take when a grain of salt, but at least with length, I’d say there shouldn’t be any surprises:

But what about width? That’s the problem, right? The TX Guide’s has been described emphatically as a more narrow shoe. Here’s the same two shoes, with the outsoles facing each other, just from the side:

The TX Guide Leather is in front, with the TX 3 in back. You can see some outsole of the TX 3 sticking out – you would think that this shows without a doubt that the TX3 is wider. But you would be incorrect. For whatever reason, the TX3’s outsole hangs farther than its upper – probably for stability, and the TX Guide Leather does not. Like this:

So footprint is pretty similar (but not actually the same). The upper is narrower then, right? Correct, but! the lacing does allow a bigger volume foot to fit into the shoe, by loosening up the laces. And they’re not joking – the lacing is quite accommodating – here’s a shot of the shoe with the laces really loosened up:

And my big old foot inside:

And surprisingly, the TX Guide Leather feels pretty similar to my TX 3’s of the same size. What they didn’t feel like to me was a more run-able shoe, which is what I hoped for. What I want may not be possible – a good runner and a good scrambling shoe just have two different parameters.

With the loss of that overhanging bit of the outsole and a generally stiffer midsole, they should edge better than the TX 3. After a bit of walking around in store, I put them back. If they were this close to the TX 3, I may hold off on buying a pair for myself. Since the flatirons here champion smearing, the TX 3 may just work well enough for me at the moment.

What do you think? Have you tried on, or own the TX 3, Guide, or Guide Leather? Let me know in the comments.

I am really excited to try the new TX guide leather. I have a pair of the TX guide, and I really enjoy them. However, as Justin mentioned, they are very narrow. Luckily, I have a very narrow foot and these fit my foot like a glove. My biggest concern with the TX guide has been durability. I actually warrantied two pairs of these, for one had a heel delamination where there is a softer foam, and the other had lug delamination on the midsole. I am excited to try the leather, for I believe they will be more durable, and I’m really excited about the more nuanced lacing options. My pair should arrive this week and I hope to get out in them soon!

I look forward to hearing how they work for you!