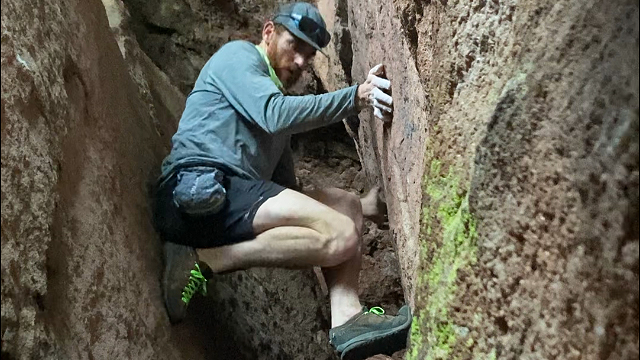 Good session with Chris. Finally felt like I had improved. Nabbed a steep .10d on the lead wall that’s been thwarting me, then tried a few burns on an .11b. Most of the session was on the lead wall.

Rode the bike about 14 miles today through town, but mostly as a recovery (and to drop off my ballot!)

I may have been a little unprepared mentally – and definitely sore in my back (if not my legs) , as I felt fairly uneasy on some sections, that isn’t the feeling I want to feel ever. I may just have been a bit rusty on the First, or maybe I’m still feeling the adrenaline from the boulder on Halloween – who knows?

So after taking forever to climb up and down the First, I immediately went to the start of the Third to have a lap. Felt much better. Then, it was time to investigate the location of a boulder I can’t get out of my mind, which is somewhere above the Third.

To set the scene, there’s some several dozen boulders above the Third, and for some reason this one seemed to have potential of a good problem on it. But, where? Somehow I stumbled upon it and yeah: there is a good problem on it, but it’s a little out of my wheelhouse. Lots of crisp crimps, to a big reach to a giant jug. Maybe a V5 or V6. A pad would be really nice. Perhaps my interest is that I could establish a FA. Oh Ego.

I bumbled up to the summit of Green at about sun down, then jogged back down to the TH via Greenman/Saddle/Amphi.

A goodish sess. Did a bunch of boulders I hadn’t before – everything from a slabby V3 that had giving me the fits, to a one-move V6 that was far easier.

I started a new job today, so the rest of the week, I’ve been adjusting to the new schedule.

Just riding around commuting. Busy day with a lunch-time meeting. All of sudden, someone is in high demand.

Felt pretty crummy on this session – maybe time for a break. Did finally top a few lower-graded problems I’ve had some problems with, including the V4 in the cave. It features a nice knee bar rest, then the exit moves are two crimps to a bump to another crimp, which I was constantly falling off of. Today, got it first go. Probably from all the climbing I’ve been doing on lead, which gave me the endurance to not die at the end of this problem.

Biked around 20 miles today – just commuting and errands. Still getting used to my new schedule – and my Macbook died, so there were a few bigger priorities to squash unfortunately.

An actual, keep the sleep jammie jams on, rest day.

A lovely day – one of those days where I had the goal of summiting Green Mountain, and got so busy doing other fun things, that never happened!

From Gregory Canyon TH, went up Greg. Pass to warm up on Mole Hole, then down the other side to the start of the Second Flatiron. There was a SAR mission happening, although I don’t know any details – but they’re happening at a very regular occurrence, which is not good. Topped the Second via Free For All, and went down the gully between the Second and Third to get on Starlink.

I… absentmindedly forgot that that was my goal, so my line was a little inefficient, but I got there. Once done, I passed right by a boulder I’ve been projecting, but I’ve deemed too hard/weird to really give it a solid effort well-rested. But, I made a conscious decision to not go to the gym today, so well-rested I was, so why not do the, “solid effort” part?

And hurray, got that boulder done. When I first saw the boulder, it seemed as if you could mantel the boulder from the very top, but at least I can’t, so traversing to the side, and doing a really weird press from there onto the slabby part was what had to happen. Those slips you see are from just how grungy the slabby part really is. The top of that bulge has some really great albeit weird, holds on it.

After the now-christened, “Half-Light“, I bumbled down to A-1, feeling like I was on quite the little streak, but when I got there, it was occupied by two people standing around, looking frustrated in big puffy coats, most likely trying to do Captain Hook, a much harder problem that starts on the roof of the boulder. I wasn’t going to dawdle, and my social skill are at an inept level (and I wanted to keep moving), so I decided a lap on the Third made sense – so that’s what I did!

After downclimbing, I remember I hadn’t been on Winky Woo in a million years, and boy: is that a fun time. I felt a little nervous though, so I decided to earmark that for another day. Buuuuut, it’s supposed to snow on Monday, so carpe diem and all. And oh man, is that the funnest 5.4 in the world.

I got a bit lost at the start, but the moves are easy enough to reverse (almost easier?). I really must start just using this as my Third downclimb, as I feel I’m learning/growing little just using the SW Chimney. This also makes linking up routes way more efficient, as going up Winky Woo after the Third does mean two descents of the SW Chimney. Pretty exhilarating what with the steepness and exposure.

And I descended down in search of something else to do. Chase the Sun? Try A-1 again? I chose the latter, but again it was occupied still with people just milling about. My nervousness doesn’t make me a real great project boulderer – I just can’t stand around THAT much. So up the trail I went (good workout!) to… I Bleed – yet another Long Ranger route, which seems to be half of the things I got on today. And it’s so much fun. More adventure route, than anything.

I finished up with a short pitch up the South Face of the Second, and I was done for the day.