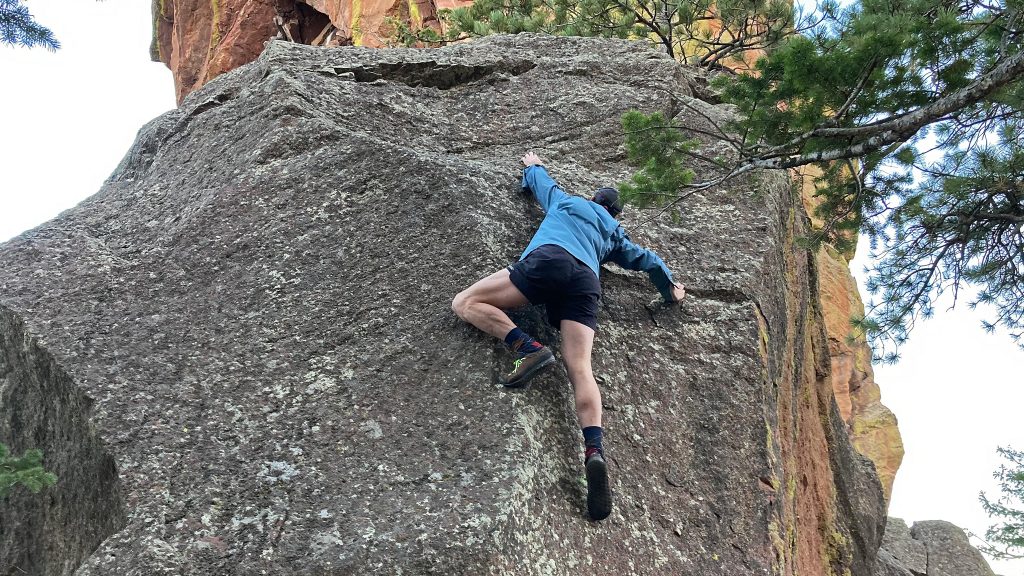 A small snowy bike ride home, and then I just hung out keeping warm.

A good session with Chris – I’m not sure though if I managed anything I’m proud of. I’m struggling on the lead wall – even a 10d is giving me fits. Oh well: trust the process. Mostly happy getting so much mileage, as Chris and I don’t waste too much time.

This was a pretty bad idea. It heated enough to really turned most of the snow into mashed potatoes, but I did my very best to ride it and have some fun, which I mostly did.

Ugh, what a terrible session. Couldn’t really top anything, although many attempts were made.

Up Gregory Canyon, and down Greenman/Saddle Rock/Amphitheater. Trails are a big soggy mess.

Tried to go on a bike ride, at least. Got a flat around the first noodly turn on Lee Hill which I fixed, then broke a spoke simply riding up the hill five minutes later. Sigh. This is, at least, the fifth broken spoke on this wheel, and it’s high time to retire it.

Not a lot to report. Finished the V4 on the steep wall that I failed on last section. Felt much easier, but still… hard. Ended the session on a V0 in the cave, where I purposely cut feet on each move, which leaves me with quite a pump after peeling off.

After my bouldering sess., I went out into the OSMP to bumble around. Warmed up on Freeway, then up the Third on already fading light (sigh). Felt somewhat uncoordinated, so didn’t go very fast – I was barely paying attention on just where I was going except thinking I should amble generally in the “up” direction.

I also had fuzzy plans to look at a boulder I wanted to play around on that was… somewhere… between the Third and the summit of Green Mountain, but I couldn’t actually remember where. It’s a forgotten block I remember passing a few years ago. Once on the summit of the Third, I looked west but couldn’t even imagine where that boulder could actually reside. Somewhere maybe near the east summit of Green Mountain. Maybe. And I forgot my rock shoes/chalk bag at the gym, so.

I turned my attention to a boulder right at the back of the Third. Everyone taking the descent trail down the Third passes it, and I’ve passed it many times with a brief pause, thinking that it’s probably climbable, but knowing no one that has. So I thought I’d give it a try.

It took me a few tries where I backed down (always being able to reverse with complete control), until I was comfortable to go for it completely, and top it. I felt somewhat tenuous at the top, wishing I had my Otaki’s and some chalk. I have a hard time grading things – I just don’t have enough experience with local boulders, so I gave it a grade of, “VO” – felt damn harder than that, but I was tired from two hours in the gym, I had approach shoes and not rock shoes, no chalk, I’m weak anyways, etc, etc, etc. It’s up on MP, if you would like to weigh in.

Afterwards, I shuffled back to the TH.