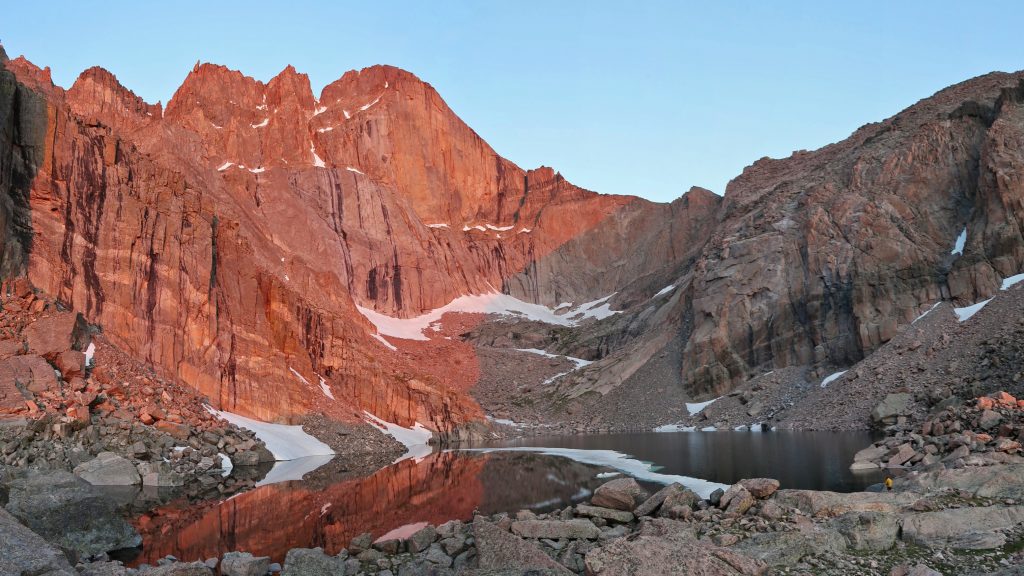 Other than dropping off my ballot and going to the store, I kept things chill.

Another tour up the local hill. This time, I took the cross country route to Freeway, then up between the First and Second to summit Green. Then, took the long West Ridge/Long Canyon/Flagstaff Mtn/Crown Rock route down to the Gregory Canyon TH. Such good routes. Gave it a little more effort than usual.

At around 7:00pm, I began my ride up to Allenspark to check out a new (to me) legal NFS bivy spot, to put a self-powered traveler just a short distance away from both the East Longs Peak TH, as well as the Wild Basin TH, without needing to camp (and pay!) for being in the Park. Turned out a pretty good (albeit dry) little spot, so I’ll eventually add it to my guide. I had an early wakeup time the next morning, so made haste to make some hay.

As of right now, timed, reserved, and purchased entry is required for the Park after 6:00am, so I had to make sure I was in before then, where access is free. That’s a little difficult to do starting in Boulder – unless you like sub 2:00 am start times.

From my bivy spot just above Allenspark, I rode the last few miles to the East Longs Peak TH. The bivy spot proved to be a nice little spot for the night. Recommended.

Back to Longs Peak after a few months pause! Nice to be back. Met up with my buddies Izzy and co at the Boulderfield to help guide them up the Keyhole route and provide moral support. A wonderful, easy day on the peak in perfect weather conditions.

Afterwards, I rode down to Estes Park for dinner and a little (OK: a BIG) nap, then rode back up near the TH to pick up my cached gear and spirit away for the night, readying for a 2:15am wakeup call.

Loft up, Keyhole Down, Longs Peak

Another easy day on Longs Peak, testing the legs and lungs, this time up the Loft with Dan. Perfect weather, and perfect timing as we caught the sunrise right at Chasm Lake.

Afterwards, it was time to ride home. Found a cut on my front tire – this is like the third such cut I’ve found on new tires of this same model, so I’m a little grumpy about things – bike tires are not cheap! Took it easy going down South St. Vrain, but once I got to Lyons, I figured if I was going to have a blowout, it would have happened, already. Got home without incident.

I joined Peter and Tina for a little tour of the local mountains just west of town – the Indian Peaks! I’ve embarrassingly only been to the area a few times before, even though I’ve wandered all around the mountains of the state. For some reason, the most accessible mountains to me have been ignored. This was a terrible mistake, as the Indian Peaks pack a lot of beauty and great alpine scrambling.

The L.A. Freeway is a ridge run from Longs Peak to South Arapaho Peak and for someone who loves long-distance ridge runs, should really be on my list of things to crush. Only a few people have completed it – it’s not without its technical cruxes – and I think I’ve personally met all that have finished it, so it’s again odd I’ve never given it a go.

Although, it’s older brother, the “Proper” Pffifner Traverse – Milner Pass to Berthoud Pass seems even more to my liking. Instead of starting at Longs Peak, you start farther north at Milner Pass; instead of exiting the ridgeline at South Arapahoe, you take on the rest of the Indian Peaks on the ridge, then traverse the James Peak Wilderness entirely, ending at Berthoud Pass to the south.

Or wth, do both! I don’t know if anyone has ever done the Milner to Berthoud Pass ridge traverse proper (and certainly not unsupported), and it’s again a little curious why it hasn’t been done, given the large population center near it, and the obviousness of the line.

Regardless, on this day, we started out scrambling up Mt Toll’s North Ridge route, which provided excellent scrambling, including a good, albeit short chimney pitch, and an even better face pitch afterwards.

Afterwards, we wandered up Pawnee, then Shoshoni (easy walkups) to the Shoshoni/Apache traverse – has some teeth to it. Fun ridge scrambling! We had to cross a suspect snowfield somewhat low, which – without crampons and on some very warm, soft snow provided some good entertainment.

Weather was somewhat degrading, so we made haste up Apache’s summit, and towards Navajo – easier to descend the Airplane Gulley off Navajo’s northeast ridge, rather than the steeper snowfield off Apache.

The weather held, and we were able to scramble up Navajo’s North Face, another good high alpine scramble. Down Airplane Gully and a jog to the trailhead. We made it to the car just as the storm hit us. Perfect timing!