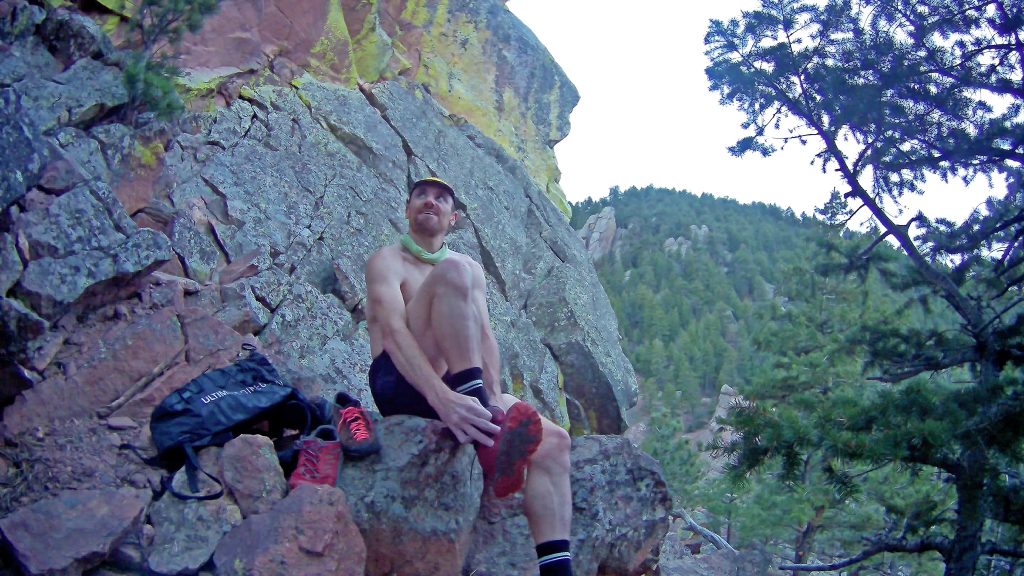 Good times in the woods on Green Mountain (per usual). Took a newish line (to me) up the ratty-looking ridgeline just east of the First Flatiron. Turned out to be a lot more bomber than I had thought, and actually quite fun! Perfect intro to 14er ridges: the commitment level is low and the movement is much like walking a ridgeline of broken up granite rather than the welded sandstone its geology is more similar to.

Didn’t pull of any haymakers, so I may suggest this little ridge, rather than telling people to head up Freeway, if they want to practice their Class 4 traverses. I haven’t checked this ridge from the bottom – I started very close to the top, so I’ll hold off on my full critique of this thing until then.

Next stop was the First Flatiron, which I had all to myself. A good scrambling up, enjoying (hazy) views.

Afterwards, I rocketed back down to the start of the Second, and did a quick lap of Free For All, then before I lost too much light, a quick trot up Chase the Sun.

Afterwards, I tagged Green, and took ‘er home back to the trail via Gregory Canyon. Can’t beat it.

Took a nice late-night hike up Green Mountain, first taking Freeway up via headlamp, which can be a little more exhilarating than during the day. I’ve done it at night (both up AND down) many times in the past, so no unknowns, but it’s just another wonderful position out in the local hills.

After a quick tag of Green, I took Bear Canyon down for nice long run back down on completely desolate trails.

Quite tired today, so a simple hike up Green Mountain up via Greenman and down via Gregory Canyon. Everything was pleasantly damp and the air was cool. Really wonderful late-night decompress.

Nice little loop apexing for the fourth time on the summit of Green Mountain.

I brought a cheap action camera up the First Flatiron just to play around – the video is seen below:

Time was about a minute off my PR to the top, which is surprising, as I found the camera on my head awkward, knowing I was recording things stressful, and all the weight in my pack… weighty.

I’m sure I could PR by a couple of minutes if I give it a concerted effort, although I don’t think that time would be all that impressive anyways. One way to gain a little time would be to go for the Awkward Slot pitch, rather than the full NE Arete – it’s just shorter. For some reason I’ve avoided the Awkward Slot – it is harder.

Afterwards, there was enough daylight to do a quick scramble up the Sunset Flatironete – it’s a tiny one in comparison to the First Flatiron and is always easy to add on top of whatever it is you’re doin’.

Then, a power hike up Green. Passed by Cordis smoking down. Summit was quiet and I decided I had enough in my legs for the long way down via West Ridge/Long Canyon/Flagstaff/Crown Rock. Some strangely good sensations throughout the run, which have been somewhat rare during my running + cycling streaks, where I mostly just feel a little tired.

Nice like late-night jog around the block before dealing with domestic chores and smashing food in mouth after a long work day.