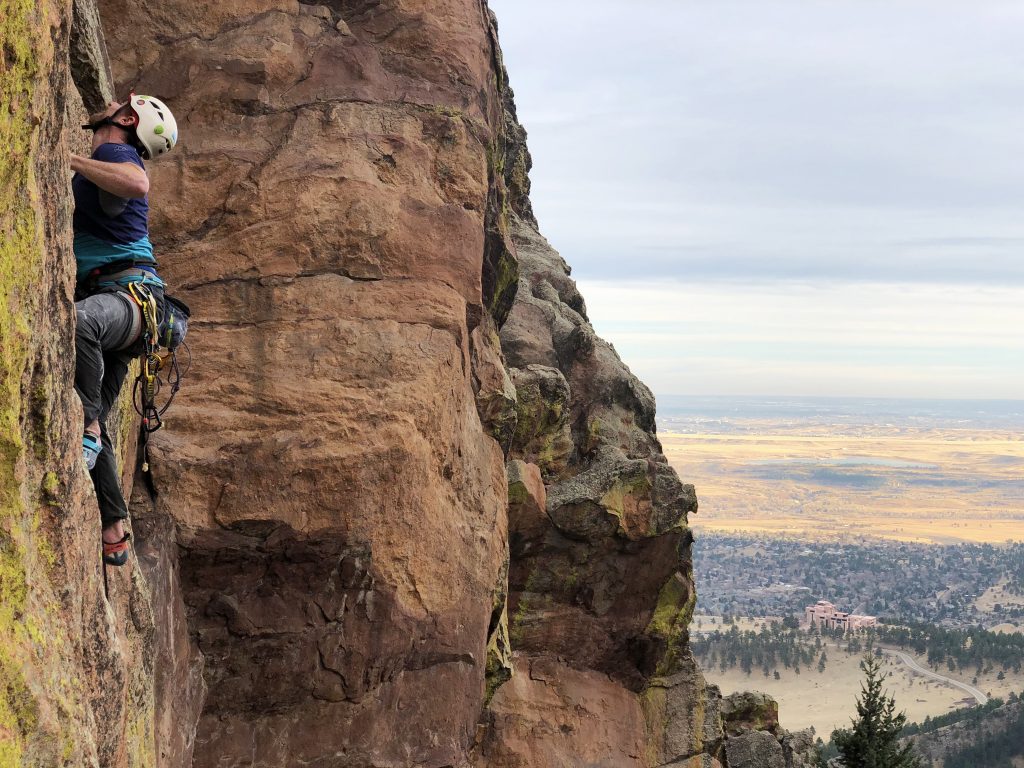 Was able to repeat the black V6 on the overhanging wall first go. How about that. Worked on some problems on a new set, and much gumby-ing ensued.

My goal on this day was to top all the V6 boulders in the gym in one, 2 hour session. I felt I was really close, as I had done all the V6’s in different days, as well as a few V7’s – I just had to put them all together!

Turned into a minor fiasco, and I could only do maybe half the V6 problems. Ah, well.

Today’s session was my second attempt to do all the V6’s in the gym. This time I was successful! Afterwards, I did a set of 10 pushups. That was my day, I think.

I gathered up my top rope soloing gear (essentially this system, with an added Micro Traxion second capture device backup) and hoofed it to the backside of the Third Flatiron. Ran into my Brother of all people on the trail! Passed him right by, as I was too busy huffing and puffing up to my destination.

Feathers and Stone is a beautiful sport climbing route near the rappel line on the backside of the Third Flatiron. I’ve passed it many times, and have often looked up the steep face, wondering if I had the meddle to ascend the line.

Only one way to find out. It’s only rated 11b, but modest grades are where I’m currently at. The Flatirons aren’t really known for it’s incredible sport climbing (or at least for its high concentration of sport climbs) and I’m not much of a sport climber, but for some reason, this line has captured my imagination.

Having no dynamic climbing rope, nor quick draws makes it a little difficult to give it a proper try (I blew my climbing gear purchasing budget on trad gear, minus a rope), I could still set up a top rope from the anchors, and work out the moves, before finally wrangling someone up there to give us a proper belay.

This still meant that once I finished cycling the 45 minute bike ride with 20 lbs of gear and hiking the hour to the base of the climb, I still needed to solo the Southwest Chimney, rappel down to the anchors, set up the system, and trust I didn’t screw anything up, before I even could start to touch hands to rock. But the process is the point of all of this, right?

At the base of the climb, I attached the shunt + Micro Traxion, gave it a quick bounce test to make sure the shunt cammed on the rope when it was supposed to cam, and quested up. I found quite engaging movement on large ledges and rails, interspersed with cryptic traverses to the next set of ledges and rails. Good stuff.

I took two burns on the route before packing everything up again – the days seem to be that short for this morning snoozer, but I think I could piece most everything together, except the last five or so feet, which I utterly failed to figure out the sequence to. Which means I’ll have to come back at least one more time by myself to work on things, before dragging along a partner.

The top rope soloing system may be making the last bit to the anchors a little more difficult to work on then it needs to, as the rope does want to pull you in a way that’s a bit unnatural to the climbing movement. I may set up the main anchor up at the Friday’s Folly bolt, then rap down to work on that last part.

After packing up, I rode to the climbing gym for a quick bouldering session. Of course, they had changed one of the V6’s to a V5, and transformed a differnt V5 to a V6, which naturally meant I had to top this new V6, as my newly minted, “did every V6 in the gym” badge of honor was now tarnished. I hadn’t even seen this climb, as the starting holds were 9 feet above the floor! You have to (sigh) run, then jump on a big fat foothold, and grab for the holds with bolt hands in a parkour-like double-dyno – a little new school for this gym, but whatever. I soon figured, after almost running into the wall a few times, that I couldn’t do the jump with an aggressive downturned climbing shoe, but couldn’t then do the awkward smedging with my approach shoe. My solution? Approach shoe on my right foot, downturned climbing show on my left. With the shoe beta suss’d out, the problem went down. I even got a congratulatory handshake. yay.

I must drink a terrible amount of caffeine. After F+S and bouldering, it was time to finish the day with some campus board training. Did three sets of 1-2-3-n to the top, then reversing slowly to my start point – not something I’ve ever done before. Then attempted two sets up bump-ups, not quite as strong or clean, but those are fun, too. A bit of core work and pushups thrown in while I was resting.