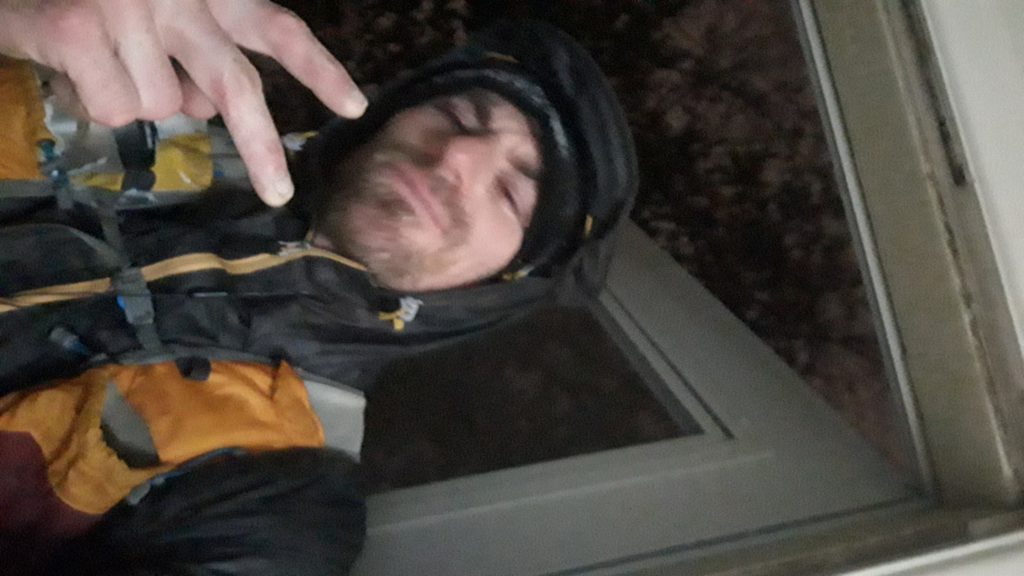 A bit of a difficult week for someone like me – it snowed quite heavily a few days this week, making getting outside a little more difficult than usual. I managed to do something to my left ankle, which didn’t really make me want to get outside all that much as well. Better to dial it back and allow the ankle to heal.

And I could have almost guessed all the problems I tried to get on were harder than I would have liked them to be for the grade, making myself question all the work I’ve put into my training.

But after trying a few more problems than the initial 2 V5’s I couldn’t even pull the first move on, it seemed to me that the problems were graded quite oddly. The next V5 I got on I flashed; then after an hour or so, I was on top of two V7’s! Hmm. I’m anticipating that this fresh group of problems will have their grades more normalized the next time I hit them. The two V7’s will turn into V6’s, as will the first two V5’s – given me a ton of V6’s to attempt to get done in a session. I ended this session trying a purported V8, which I got a few moves in (something I’ve never been able to do before).

Campus board session was really good – around 3 trips up the largest rung (~pad and a half for me); one trip from the bottom rung rather than starting at rung #3 (rung #1 is just a low, awkward start for me).

Pullups were about a set of 4 of so with weight – around 20lbs (vest wasn’t labeled), and a set of Frenchies. Ended with a quick 3 sets of 15 of reverse wrist curls to try to keep the elbow tendonitis at bay.

Finished up with a Myrtl routine, been a minute on those. Hip mobility feels pretty terrible for me right now.

Meant to do a spin session today, but ironically, there was a class at the time I had to do the sess., and you know: I’m such a loner, I didn’t want to take the class! So I guess something to add tomorrow.

Ran to the gym, spun for two hours, then ran home. Somehow sprained my left ankle on the run home – I think. I was so tight, maybe it’s some strange tear, or I broke a bone or something. I dunno – made me weep! Hard bricked workout regardless. Not too ashamed to say, I haven’t ran on the road in a very long time – I should more so, but something tells me, I won’t.

Didn’t warm up on the 45 degree overhaning wall for the first in forever – not sure why. Just focused on the newer set on the slightly overhanging wall. As I suspected, the grades were normalized a bit and make more sense. Not too much new ground; repeated a V7 (which was nice), but failed on trying to do another V6. Worked on a V5, but couldn’t top a different V6. Pretty lumpy session, but that’s fine. Legs felt out-of-control tight, and no mystery as to why. Definitely, definitely have a sprain in my left ankle – dammit.

Thought about skipping this, as my left middle finger feels less than 100%, but did a few laps. Nothing special

Felt the ankle was too unstable to really push it, so I didn’t.

Warmed up on the 45 overhanging wall. A little shaky on the V5 + V6, but got it done. Foot started out feeling pretty terrible just walking around, fine on the wall, but needed to be pretty protective when falling. Legs in general still tight, tight, tight. Ugh.

Worked on the yellow V7 I’ve topped twice in the last two sessions, but having trouble on the second move. The first move is a sideways sloper ball thing for your R hand, good but not great. The next move is another sloper ball for your left. This is usually basically a campus move for me. Everything is all off kilter, so there’s a bit of a swing I have to deal with, before I can put a foot on. I tried dozens of times today, but couldn’t ever control the swing. Sigh.

I could feel myself getting weaker and weaker, so it was time to work on some micro-beta. I realized that the starting foot was high enough where I could go for that left hand, while still having a foot on that starting foot, all I needed to do was to rotate my foot from pointing to the left, to pointing to the right. After that, the whole problem was incredible easy. I’m almost positive that the next time I get on this problem it’ll take me three goes to top, rather than 30.

Worked on a V6 that also features some sloper balls, then to some slippery crimps. Grabbing the first crimp from the sloper ball is the crux, once you do, you match, and the problem is essentially over. Had enough sloper-ball strength to get this one done. I have large hands, so perhaps I’m good at slopers than most at my weight.

Then, decided to work on another V7 just for fun. Since I was getting tired from the session, I didn’t judge I’d have much of a chance topping this V7, but incredibly again it was working on technique of grasping a tricky sloper correctly. In this case, you really needed to literally drop down and grab it from a very low position for any chance of holding on. After that, the problem is solved.

Had some fun on the larger rungs – did a few sets of doing ladders up, then down, as well as bump ups – neither I’ve ever attempted before. Pretty fun. I seem to react well to when things are more of a game, rather than things that fill in spreadsheets. Big Surprise.

Ankle felt pretty OK to do this, even though I’m limping all over the place.

Repeat of Friday, really – just a little better at everything. The yellow V7 I thought would go down in < 3 tries took a dozen though. Watching other people, including people much better than I am, that second move with your left hand is just a low percentage move, I guess. Interesting to see people’s different beta though: some try a high left heel hook (too high for me), some have no problem with the first few moves, put peel off the last few moves that I have no trouble with

Usual mix of supplementary exercises, took about an hour. Moved to doing pushups with one leg raised with strict form. I would like to add some dips, but it seems my right shoulder won’t take the strain at the moment – feels injured. Ended the block with one set of 5 weighted pullups.

This week was a lot of indoor bike riding.