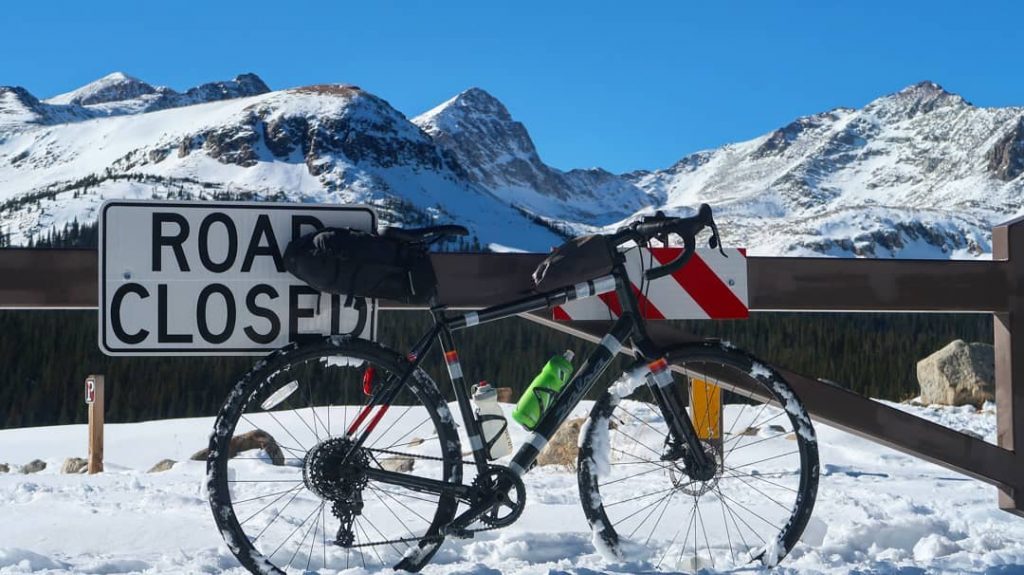 New project for me: a V6 in the cave! I’ve never done a V6 in the cave, but this was just put up, so I’ve got over a month to try! Seems doable, but haven’t linked everything together

a few laps on the laergest rung. Fun!

Usual warmup on the overhanging wall, then worked on then cave V6. No send! Felt close, though. But also felt I was too too weak.

Worked on a few laps up on the biggest rung, the second smallest (2, but not to the top), and the sloper rungs, which I surprised myself that I could do any at all.

Thought I’d try to get a ride between snow storms. With all the road closures and road conditions impacted by the last storm, my options for getting high are already being impacted. I decided to go with Left Hand Canyon, which is a wonderful road ride to Ward. From there, I’d try to get up to Brainard Lake, which I anticipated would be closed at the first parking lot. And I wanted to go relatively fast, perhaps attempting a PR.

Ride was good, with a few patches of ice that I noted on the way up. Hmm: not so attractive going down. Perhaps, I thought: an alt. descent? Brainard Lake was closed at the first parking lot, so I hoofed it with the bike to the upper parking lot, if not for the views. Certainly worth it – and I guess: worth enduring all the strange remarks from people thinking I’m stupid for pushing a bike through snow. I’m pretty used to this now (the strange remarks), and I don’t feel the need to give people my autobiography every time I’m around people doing something they deem as silly.

It is silly! I’m playing!

Even though it was getting a little late in the day, I decided to do an alt. descent. First down Ward, but a right onto Gold Run, and onto Gold Hill Road. I knew Gold Hill would be a bit sloppy, but anything icy would be on gravel, so the chances of me totally eating it would be mitigated. In the end, this was a good call, and I had a wonderful view of the Boulder from the backside on my very fast descent.

One of my favorite downhills in Boulder. I remember going very fast down this road with only a worked pair of canti brakes keeping me from pitching over a siderail during the Boulder Ultracross, as I attempted to rocket to the finish line without getting a flat. I had somehow distanced myself from everyone else on the ascent up Lick Skillet on a single speed, and I wasn’t about to lose my lead. Even with a precarious all-out descent down the connector trail to Lefthand, my wheels stayed firm and I made it to the end, unscathed = and the win!

In the end, I think I did PR at least the climb up from Old Stage, so yeah for me.

After my usual warmup on the 45 degree wall, I put all my focus on the cave V6 I’ve been working on. Felt pretty weak and my fingers were very sore from the past week of effort. I was having a lot of trouble with the initial crux located very low, which was disconcerting.

I thought perhaps I should bail on my attempt at this problem, as it didn’t seem as if it was going to happen today. But, rather I kept at it and decided to work on my micro-beta. Feet here seem very tricky, so I began regarding myself climb. I realized my left foot was kicking out while I tried grabbing a small hold with my right hand, and that’s what was taking me off balance.

So I changed up my beta: instead of kicking out, I simply flagged my left foot out to the left, and this out me into a stable position to grab the right hold with my right hand, without flying off the problem. After that, it wasn’t much effort to finally complete the problem, as the top portion didn’t present any difficulties I hadn’t figure out already.

I was pretty psyched at finally finishing a V6 in the cave – this is the first one on this steepness I’ve ever done. It seemed it really wasn’t strength that was holding me back – I was probably the weakest I’d been all week, what from all the hangboard/campus board work; it was instead my technique – particularly in my feet, and just having my mind allow my body to do the moves.

For posterity sake, I attempted to repeat the problem (How brash! How BOLD!), first starting from the halfway point (which was easy), and then from the start (which was not). I surprised myself in completing the low crux again, only falling at the lip. To be perfectly honest, the effort to complete the problem initially was certainly at my limit, leaving my forearms quivering. Unfortunately, I’m just not a very strong climber.

No hangboarding/campusboarding today: my fingers – especially my cuticles were too sore to do any of that well! A few sets of pullups, pushups and core work of middling structure ensued.

Have to be honest: hard to get through the full two hours.

I finally got up at 1:30 pm to snow outside. Good day to rest, although it’s supposed to snow until Wednesday!