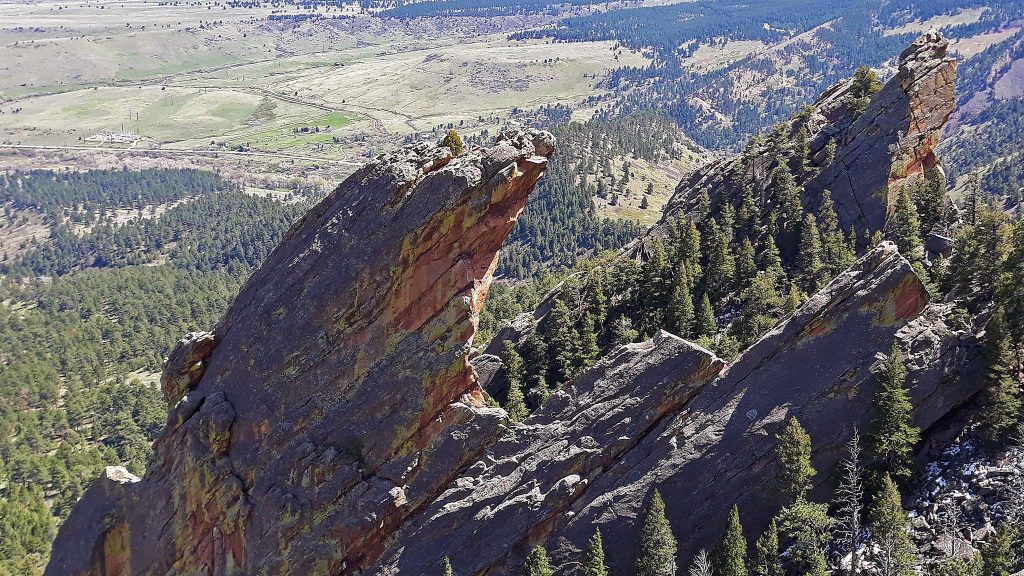 Good session – managed to redo all the problems on the overhanging 45 degree wall up to V6, which I’m still in awe of (because I’m weak). I mostly spent the rest of my time hanging with Chris and Heather Weidner and trying some boulders together. Some of Heather’s climbing:

Thought about staying and doing some more arm work, but my fingers were feeling a little touchy, so no hangboarding/campus boarding for me.

Had a hard time getting through this session, as spinning indoors seems terribly sacrilegious this late into Spring.

Just a little extended ride before my run. Managed to snap my chain riding up to Linden – chain suck into my chainstay is all it took. Thankfully, I fixed it in just a few minutes and was on my way.

Up Amphitheater, and down Long Canyon. Started raining when I started – hoping for a mind-blowing inversion at the summit, but pretty much socked in the whole way. Aww, well.

Some new boulders (finally) set! A particularly slippery V6 on the 45 degree overhanging wall foiled my attempts to top it in one session, even though it was quite short. I’m sure I’ll get it, soon. Not too terribly motivated to try hard, or do much extra work in the gym, so thought it best to go out and get some fresh air, even if the weather didn’t seem really all that stable.

Even though it started to rain on me as I left the gym, I decided to do the ride still, as I was all kitted up. Flagstaff is nice, as there’s many stopping points: the turnoff up Flagstaff Mountain, the “Mailboxes” (Super Flagstaff), and where the road turns to dirt/4WD track. Any farther, and I might as well ride to Nederland. Being late in the day, I nixed that last idea, but thought there was really no reason not to get to dirt.

Rain, then snow all the way up to my turnaround point made things a bit chilly, but I had some clothes to spare, and a pair of Goretex mittens, so no worries. Descended via Chapman Drive, thinking riding the wet track would be a very terrible/GREAT idea and one to get myself very dirty, but it was nothing but pretty and pleasant, and I’m glad I went that way.

Lovely little run late in the day – from Gregory Canyon, up Amphitheater, down Ranger. Felt pretty terrible today with a lot of head pressure – the kind you get during a head cold, or pressure change (the latter which I think was going on), but I thought a run would help – and it did! Took it easy going up to try to re-calibrate, then gave it a bit more umph going down. Even PR’s a Strava section (lol).

Nice long day in the hills. Met Peter at Cragmoor TH, and we were soon on our way to The Slab on another recon of the Flatiron Classics. The Slab holds one Classic, Diagonal, which was on the first routes after Freeway I had ever done – at the time, if felt like a major step-up in difficulty, and I remember being pretty scared. Today was a little more relaxed.

Peter takes a more… diagonal line than I’ve ever done, staying in the middle of the rock for longer, and crossing over a few different routes. Man, that slab is just a sea of holds, for sure. His way went just fine.

Next, we visited Shanahan Crag, which has two classics. Creative routing had us first downclimb Southeast Ridge to the anchors for South Face, set up a top rope, top rope South Face, then break everything down to continue the downclimb of Southest Ridge.

Once that was completed, a little cross country trek to the base of Tiny Tower for a tiny little adventure up its East Face route, which was actually really fun, although watch out for loose rock.

Afterwards, we made our way to base of the Fatiron, for its enormous east face route. Another rock that, if close to a trailhead, would be as popular as the First or Third. The east face is broken up inti two parts, and the crux of the whole climb is a 5.4 downclimb. Peter talked about the time Buzz Burrell fell from the downclimb and broke his ankle. Yikes!

At the summit of The Fatiron looking south looms The Maiden, and our last goal of the day. The standard, north face route starts on the west ridge (strangely), and requires one to scramble mostly down its catwalk to the base of the mighty overhang. From there, an interesting albeit weird-to-protect route traverses east more to the east face, where an easy scramble awaits you.

Peter led all this, starting with a curious top rope setup on a ancient fixed pin, backed up with a hex (a hex!), then a long traverse pitch with one fixed pin for pro. The last pitch was just the scamper to the top.

Once at the top, the almost 30 meter rappel down from the summit is quite the experience, augmented greatly with the fact that your landing is only a foot or two wide, and there’s 30 more meters on each side. I whooped and hollered quite a bit going down. Best rappel I’ve ever experienced.

With that, we packed it out.

Climbing at The Dome/Elephant Buttresses

Plan was Eldo, but it was just too late to gain access into the park, so Plan B was Boulder Canyon. Most of the parking for The Dome is blocked off for construction, so little traffic in this area at the moment. We wandered around The Dome a bit, but really only got on Left Edge, before going to the First Buttress to try out Flash Dihedral. More of a trad. teaching day, then a try-hard day. Thanks for everyone, M.!

Nice double tag of Green Mountain. Ran into Andrew on my way up to the base of Freeway, which was a nice surprise. Freeway was as busy as ever on this Sunday, but I was able to get a quick lap in, without too much bother. Tagged Green, then ran the backside via West Ridge/Long Canyon.

Back at the bike, I replenished my water, and had a bite to eat, then back up via Amphitheater, then down Gregory Canyon. Ran into all sorts of other folks. Beautiful day!