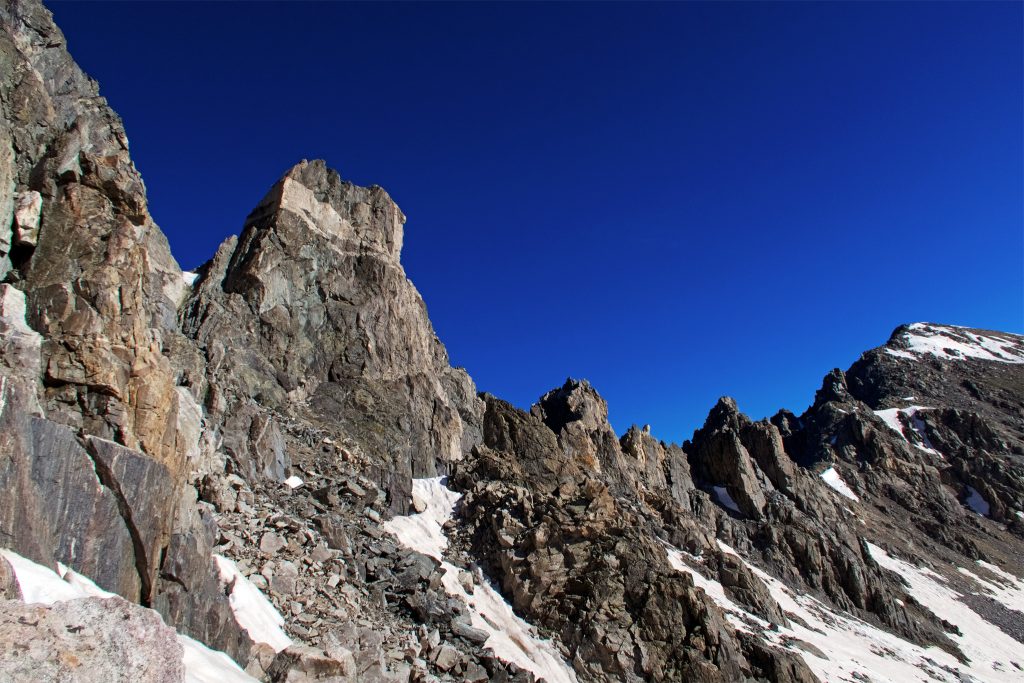 The Mosquito/Tenmile range in Colorado runs south to north between Buena Vista and Frisco, CO. Inspired by Peter Bakwin’s nearly futuristic vision and attempts to traverse the entire ridgeline from Weston Pass (outside of Leadville, CO) to the Mount Royal trailhead, I awoke early Saturday morning from my bivy underneath a tree at Trout Creek Pass, 30+ miles to the south to start on, “The Line”.

The Complete Mosquito/Tenmile Range Traverse is almost completely off trail, with terrain covering everything from shifting talus to crumbling spires, hours of Class 3/4/5 scrambling, twenty-seven contiguous miles above 13,000′, and dozens of separate peaks – named and unnamed. It’s hard to even fathom, let alone describe succinctly.

I was (irrationally?) determined to first cover the *additional* mileage to Weston Pass from the true southern terminus of the range, then continue on to Frisco. I knew realistically I had little chance of completing. From my research, no one has even tried this traverse from Trout Creek, and only one documented traverse from Weston had ever been completed by Jeff Rome in ~2012. I’m no Bakwin, nor Rome.

What chance did I have? Why should I even try? Well – what did I have to lose? With little prep. (I lied to myself – spinning a yarn that this was a scouting mission to myself – to friends…), and bringing along food I thought would last for three days, I set off on terrain that I was completely unfamiliar with to see what lay ahead.

91 hours, 87 miles, and 30,000’+ of elevation gain later – completely unsupported/unaided and carrying everything I needed except water, I had run out of mountain range to *range*, and was at the northern terminus. The Mosquito/Tenmile was traversed!

And I was myself shattered to pieces. It had taken everything I had to keep it together, to make it through without incident, and to keep putting one foot in front of the other in moving (and stumbling, and falling – often) meditation. But, “The Line” had been traced as best I could have hoped for, given what little talent I really have.

As with every challenge in life: mandatory – or I guess recreational (for those so privileged to have the resources for the latter), the act of transcending your perceived weaknesses against imposing odds… then finding the other side leaves you perhaps in that self-awareness state of serenity for just a second. Then life begins again – the Earth never did stop revolving – maybe you just stopped thinking so much?

I have much more to write, share, and teach about my experiences this past weekend (and all those other days/months/years I’ve found myself doing silly things in the Wilderness), but that’s itself its own separate, much larger project, for which I’ll spend much of my life practicing. Thank you to everyone that has helped me with this and my other misadventures. Sometimes, I’m chanced with Awesome things coming together. Find a line out there – real or imaginary, and fill it in with your own experience.

Holy catfish that’s impressive. I did the Tenmile Traverse back in the day (before it was cool, natch) and that pretty well wrecked me. Tacking on the technical bits of Rockfountain, not to mention everything south of that… I can’t even imagine.
Gauntlet thrown.
Next up, the LA Freeway?