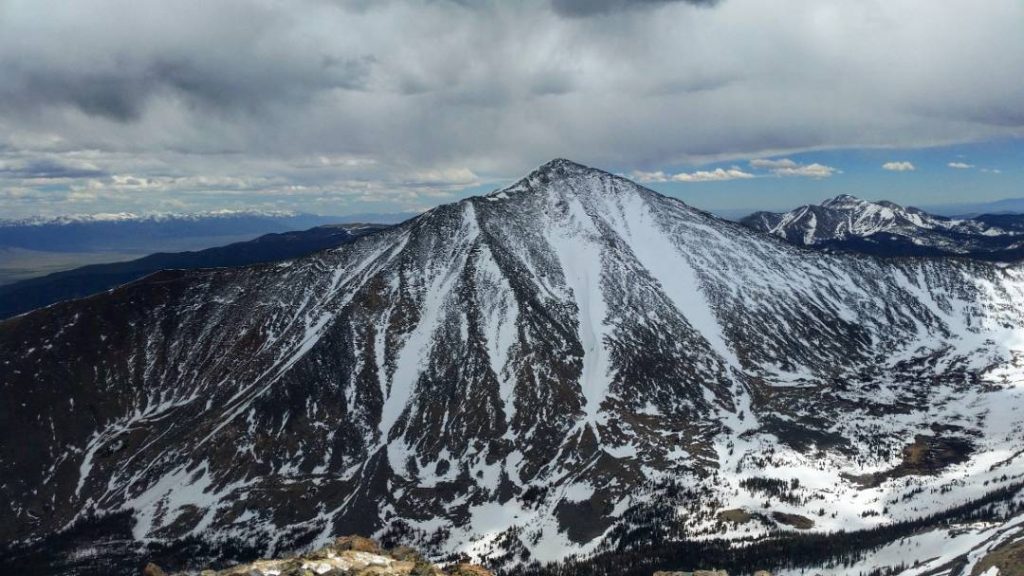 I took a ride out from Salida to Poncha Springs then onto Chaffee County 210 to the rarely visited (by 14er standards) Little Cochetopa Trailhead, which gives you access to Mt. Ouray, a Centennial peak @ 13,971′. The last few miles of the well-maintained road turned into a legitimate 4WD track, and it was a nice challenge trying to get my over-burdened Surly ECR up this steep track. Eventually, I got ‘er done, and after a little wandering around looking for a flat place to set up the Ultimate Direction FK Tarp while it slowly began to rain, (then snow), I was able to get some sleep.

The next morning (after sleeping in a bit), I set out from the trailhead following the actual trail for a little while, until I turned south and started gaining a saddle of the ridegline. That went smoothly, even though the trees were choked with snowdrifts. Once on the ridgeline, I was greeted by bristle cone pines – quickly turning into my favorite tree, and started the hike to the top of Ouray. The ridgeline proved a little spicy – with a few Class 3 moves if you didn’t want to drop too far off the ridge itself.

Mt. Ouray, 13,971′ seen from Chipeta Mountain 12,850′ under threatening skies. I made a nice loop of the Little Cochetopa Creek basin starting from the south, and going clockwise following the ridgeline until I could find a place to make an “interesting” descent/schwack back into the basin. Beautiful time up there, highly recommended. I saw no other human all day, and was wondering if I’d instead see moose or beaver first. I startled a large pheasant coming out of heavy brush, but quickly lost sight of her. Happy the clouds only opened up for hail, and not lightning. . . . #colorado #14ers #13ers #mountainrunning #trailrunning #highesthundred #runwithud @ultimatedirectionusa @lasportivana

Soon the summit was gained, but weather seemed to want to move in, in the form of some angry looking clouds. The wind picked up, but I decided to keep moving along the perimeter of the basin on then same ridge to see if I couldn’t also summit the neighboring peak, Chipeta. There’s a bailout point between Ouray and Chipeta, so I kept an eye on the quickly degrading weather, as I made my way down the ridge.

The weather did hit, but came only in the form of some hail – no thunder or lightning, and I took just a few minutes for the worse of it to pass over me, before continuing my hike to Chipeta. The rest of the day was fine, and Chipeta was summited with not additional difficulty.

Descending back into the basin was a bit spicy – I had no beta on this, so I just chose a saddle on this side of the ridgeline, and pointed ‘er down. I glissaded a bit to a talus field and rock-hopped a bit, until getting suckered into a steep ravine, with a small creek running swiftly down it. Deciding it would go with a bit of care, I quickly descended into a huge field of thickets, with whip-like branches. Slow going, but not impossible, and lucky for me, a social trail (animal or otherwise) suddenly appeared to take me out of that and back into more manageable bushwhacking, where I then re-found the main trail. Good route!

Really fun day. I’ll almost surely approach Ouray on the Highest Hundred by Marshal Pass, as I can ride from the west side of the pass, leave the bike at the top of the pass, take the quick hike to summit Ouray, then ride down the east side of the pass and onward to either the town of Salida, or directly to Shavano/Tabeguache. I wasn’t sure if Marshall Pass is open all the way open to the top, and I wanted to explore a different trailhead, so Little Cochetopa worked perfectly.

I also know Marshall Pass somewhat intimately; it’s part of the Tour Divide route, the Colorado Trail Race route, the Vapor Trail race route, and with all the racing and recon of all those rides, I’ve visited Marshall Pass almost more times than I can count. I’ve never managed to summit Ouray though – having tried once from Marshall Pass, but failing due to the threat of lightning, so it was nice to finally tick it off. I look forward to visiting its summit again in a few months.