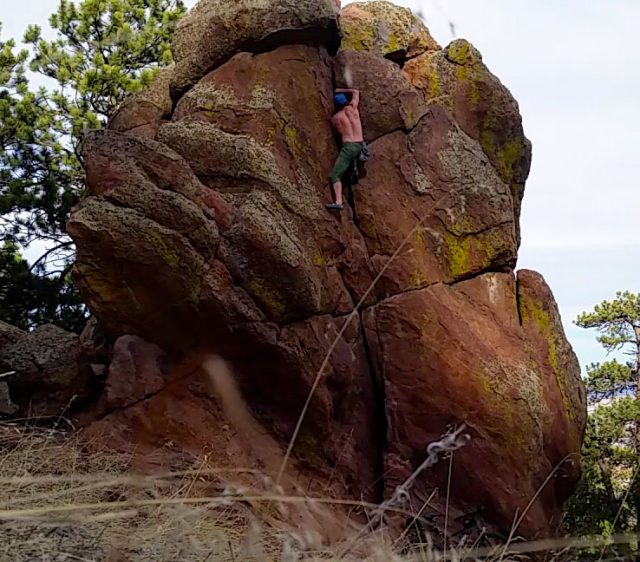 A very blustery ride – my actual goal was to get to Nederland, but being blown off the road made me reconsider. Swiss. Trail was mostly sheltered from the wind, and it was a fast time on Gold Hill/Gold Run. Stopped for coffee at Trident before heading home.

After a solid two hour sess. bouldering @ Movement, I took a quick spin up Flagstaff Road to the Cookie Jar Boulder to check out the Cookie Jar Crack route, a high – but pretty moderate bouldering problem up its west face. I was confident that I could solo it, so I gave it a go. After a little bit of time sussing things out, I did a few laps (4) for fun.

Cookie Jar Boulder on #flagstaff mountain! So hard sometimes to pass up an obvious climbing line everytime I cycle up and down this popular road. Now was the day I decided to make a quick trip up to do a few laps. As fun as it is tall- and it’s *pretty* tall. #highoverboulder #moderateclassics #bouldering #boulder #colorado #startswiththelettterc #climbing #startswiththeletterc #whatelsestartswiththeletterc?

Afterwards, I did an easy lap on Freeway on the Second, then jogged up to tag the summit of Green Mountain.

Did a progression of all the problems I could in 2 hours, from V0 to V3. Missed, I believe, the V3 in the cave, which I couldn’t redo.

After being derailed by broken bikes and being hit by a Jeep Rubicon on a ride to the grocery store, I pedaled my way up the very familiar route to the East Longs Peak Trailhead on my Surly Ogre – a funny  (slow!) choice, but really the only bike I have fit for the task.

The weather was supposed to be calm and clear – a great window, but my ride up in the early morning was very foggy  – and quite warm for being Winter. As I made it into St. Vrain, I realized that it was snowing around me which started soaking through my base layer and tights. It was too warm for the snow to remain snow for too long, and I was worried that once I finished this long uphill, and got on the undulating highway north, I’d start freezing, as I was just mopping up the precipitation falling on me, or splashing up from the road.

I put on more weatherproof clothing choices, and decided to just keep going – going down would certainly be uncomfortable, so I was damned either way.

With a little luck, I made it to the trailhead without further discomfort, and transitioned to hiking, basically by stripping back down into my base layers/tights, and hoping the hike in would start to dry myself. The air temp. still felt mighty warm.

The Winter shortcuts were badly put in and I took the regular trail for much of the way to treeline. I decided against taking Jim Groves, as I didn’t know what the snow was going to look like (and I wasn’t packing snowshoes), so onward using the usual trail I went. One thing was sure though: I was way overdressed and overpacked. I left a cache of gear at the junction to lighten my load and continued on. Jims Grove looked very doable, but I’ll have to go back this way after summiting to pick up my gear.

The going was relatively straightforward – there wasn’t a ton of snow around, as most of it seemed to have blown halfway to Kansas. I made short work of the boulderfield and the route after the Keyhole was relatively tame for Winter conditions  (no big snowfields to negotiate).

The Trough had much of its slabby bits showing, and this is where I finally slowed down a bit – def. feeling my lack of acclimation. I was hoping it wasn’t asthma coming through, but I don’t think it was. I got into a good rhythm of taking 20 steps, then resting for 10 breathes, and that got me pretty well all the way to the summit. Even having to pave myself like this, the Trough seemed to take no-time, as I was now used to starting from its very base like the last time I was in this couloir, rather than more than halfway up, as on the Keyhole rotue.

Cresting Homestretch, I found two teams of two already at the summit – I had spied them climbing the Cables route – it’s somewhat surprising to see them at the summit, as that route should be much, much quicker than what I just finished up.

Dropping back down, I negotiated a slower party on Homestretch, then continued to the Keyhole, where I stripped off even more clothes – my poor PB Adventure Vest was  becoming a bit over stuffed with all the clothes I was making it carry! Found my cache of gear after trotting to the junction (thank you GPS) and Tetris’d the rest of the gear I had to somehow get back the trail head. I couldn’t believe how much I over packed, but it really didn’t seem like all that much – there just wasn’t need for much at all!

Once at the trailhead, I sorted my gear, packed everything away, and dealt with a nice altitude headache. Ugh. An Aleve or two would clear this right up, but I brought none with me this time. Well, hell. I found it peculiar that it was still daytime – the last three trips I had done on Longs: Keplingers, Trough Direct, and my last Reverse Radical Slam had found me each time many hours after night had fallen, so it was nice to know that this would be a bikeride home with some sunlight.

I had plans to take a less than direct route home, but man, that headache was not making being on the bike for multiple hours longer than I needed to an attractive idea, so back home the way I came. Got back to the Busstop a little under 15 hours later. Hey, not bad for using a full-on bikepacking mountain bike, in Winter!

My ride up to Longs Peak was round a half hour of riding time slower than usual, although my time down was about normal. Much better than I would have expected on a heavier and slower bike. Those disc brakes did indeed come in handy, though.

I had a goal of 20k’ of elevation this week, and I wasn’t exactly there yet, so on tired legs, I set out to Chautauqua for another lap on Freeway, and to tag the summit of Green. On the way down, I decided to explore a bit at Saddle Rock – a formation I hadn’t ever visited. I found a few fun scrambles – none that are really documented anywhere except for one: the northwest ridge of the south summit, which I may be wrong in identifying still. I basically say a blunt arete with a crack in it, and thought, “I can climb that!” so in my trail runners, I did. Rock was licheny, but sticky enough. Fun, quiet place, high over Boulder.

Good times this week, lots of mileage and hours, especially since I took an entire day off. Maybe try for 20k’ of elevation next week, again?