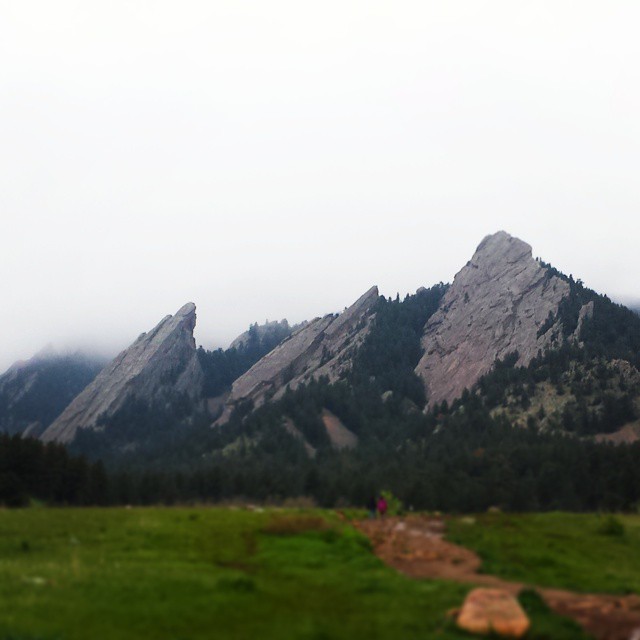 Positively awful bouldering session before work @Movement. I simply gave up after a little while. Nothing was clicking.

In the afternoon spun on the bike for an hour, then did my stretching routine. Was going to go for another hour of riding, but man, I wasn’t feeling it.

Another wet, demotivating, gloomy day of rain on the Front Range; another day upon what has to be weeks of similar days; another day of staying indoors and riding the bike thing. Felt a bit better than yesterday. Probably good to take a bit of time off for tapering and such. Completed another very long stretching routine. Trying to open up those hips.

In the afternoon, met up w/C for some climbing, starting with some easy top rope warmup climbs which I decided to quickly climb up – if not perhaps because I just finished up listening to a podcast with Hans Florine. C wasn’t feeling it so left, and I finished up the sess. bouldering.

Goodness. For whatever reason, I was climbing super strong and within a few tries, I was finishing problems I’ve been working on for weeks. An overhanging, pumpy V2 has given me problems for a few sessions, but was quickly dealt with on the first try. Another overhanging V4 route with an undercling start and awkward holds that I’ve never been able to even approach finishing also went on the first try. It was as if I had an extra reserve of strength I previously never tapped into; extra grip strength, extra endurance – everything! My footwork was horribly sloppy, but it just didn’t matter. I could hold on forever and pull like nothing else. I felt like I was occupying another person’s body.

Sent a V3 which features a double dyno after a little bit of work. Then, repeated it on the first try. I must have worked on this problem dozens of time, with no luck. Finished up a v5 that features small, balance-y holds that wraps around a corner in 3 tries – another problem I’ve tried dozens of times with no luck. Heel hooked a chip to make it happen, all with shoes that are falling apart.

One of my most fruitful bouldering sessions at Movement, ever – two V5s in one day at this gym is unheard of for me – I’m just not that strong. I could of done three V5s, but then I’d be repeating problems. I can only guess that resting up for my race next Saturday also had the side effect of allowing the rest of my body to recoup as well. Perhaps all that stretching also helped me with my flexibility on some of these problems. Maybe just what I needed was that difficult session on Saturday on the lead wall. Maybe it was just one of those days.

I’m still in disbelief that I can run 99.9% up Green Mountain, and more in disbelief that I can call an outing like this, “Casual”, but that was my session today. No real goal but to run up/down and not get too wet outside. Trying to hold back a bit for next week’s race. 60th summit for the year and another nice threshold reached for my 100 summits in a year goal.

Well, so much for holding back. Homie mentioned that I should probably try hiking up Green, as I could be a bit faster, since he was much faster when just hiking up. So that’s sounds like a fun time, let’s do it.

By my watch, I made the summit in 37:20, pretty much my PR. The amount of hiking I decided upon was pretty much the entire route, save for parts of the trail that were either non-technical, flat, or descending. The entire time I was thinking of how slow I was going – especially on the steepest sections, but the numbers do not corroborate:

PR’d the first mile of the trail: a staircase section @ 25% grade to Saddle Rock by almost a minute, and by almost two minutes of any recent effort of purely running up the section. Two minutes faster – in the first mile! This by far the hardest part of the trail, but I decided to keep on with the experiment and hike anything else that was steep. And this: felt very hard – much harder than running it in most instances.

I want to say my heart rate felt much higher and my pace seemed much slower – all and all, it just seemed a more difficult way of going up the mountain than purely running. This was surprising, since I’m hovering around 173lb on the scale – not light for a runner at all. A hike should be much more efficient and thus easier for me than running up the mountain. If I weighed 20lbs less, this could be different.

When I attempted to run the last bit of trail – some easy, if rocky, switchbacks, I had to fall back to hiking – my heart was just pounding too hard to get a usable gait. Other parts lower down on the trail were easier to run and I have to admit that if I stuck with just running the “easier” sections, my running pace seemed to me much faster. A difficulty I faced was switching from hiking to running – the first few steps of changing gears is not pleasant. Changing back to hiking feels deflating – “I’m slowing down!” was what I thought and felt.

Total time was around 58:30, which means my descent was pretty swift – seemed to be my second fastest descent ever, and fastest without 2 feet of snow on the entire trail – such conditions allow you to kind of just fall down with control. Given that the wet/slick conditions of today weren’t excitingly ideal, I wonder if my legs just felt pretty fresh, rather than a bit beat up/stiff from the running I hadn’t done right before.

That’s entirely far too many words for an hour of running, but I’m trying my hardest to optimize my Dirty 30 experience. This little experiment gives me the conclusion that I shouldn’t run any of the uphills, if the uphills aren’t supremely buff, and most especially in the first half of the race (also keep an eye on exertion and heart rate). That was going to be my strategy anyways, but this seals the idea for me: I’m not going to gain any time, and I’m probably just going to beat myself up for later in the race. I can now at least feel comfortable with the strategy, rather than critical and nervous about it. Come Windy Peak, at the end of the race, I’ll break into running up to the summit, as there’s no real reason to hold anything back at that point. This all gives me the confidence that I can accomplish a sub 6 hour finish time.

If I was a little stronger, a little lighter, or a little more experienced, I’d go with a more aggressive strategy – people surely have run the majority of this course, but that’s not who or where I am right now, so coopting their strategy seems a fool’s errand.

To me, 30 miles just seems such a short distance and I want to get it over as quickly as possible. There, I think, is the trap set to capture someone like me, who’d be more interested in trying 100, 200 or the entire Colorado Trail in one go, rather than such a short course. This alludes of inexperience and clouds me to what I know are my prof
iciencies: I can literally go forever, use that to my advantage. To me, that does hint that I need to start slow, and be consistent with my pace, then go all out at the end.

Afterwards, I met up with C, to climb indoors – something we’re both pretty sick of, but barring a cross country road trip, what-are-ya-gonna-do? We hit up the lead wall almost immediately, apexing with a 5.11a climb we both fell on only once, which seemed pretty alright. We’ll hit it up to try to redpoint it another day. Another day!

Lead climbing is fantastically confusing to me – most notably: the rope and where it should be, in relationship to your body. If done wrong, the safety it should afford you can actually be mitigated, while also injected a different type of danger: tangling up with yourself, flipping you upside down, and having you crash your face into the wall. So. I’d like to get it right. For whatever reason, the correct way to handle this situation is completely unintuitive to me, and when I think of what to do and make a non-automatic decision, I usually make the completely wrong decision. Sigh.

…can’t remember if I actually did anything on this day, although a cold descended upon me – great timing.

Head cold in full force, but we went out to the climbing gym, and back on the lead wall for at least 15 routes under our belts, which is a good deal of hard climbing. Failed to redpoint the 5.11a I was attempting, felt much better with my rope work, so that’s a plus.

The sun almost made an appearance today, but quickly turned into an afternoon mega-storm.

A little dismayed at the amount of running a week out from the race. I told myself I needed more, but the body was protesting, so I let it win. Trying to rest up is a source of much anxiety. Hoping the race won’t be called on the account of rain, but that seems extremely unlikely at this point.