I was asked by UD to attend the Runners High Fun Run.

But. There’s… things about me you don’t understand. I Am A Loner Dottie, (A Rebel!), so getting me to do something in a group of people is tricky. UD do a lot for me – essentially they’re a huge fan of awesome things in the mountains, of which I tend to do a lot of, so going to this fun run is No Big Deal for me to accept. And the running community is accepting to weird people like me, since it’s just full of weird people already.

Along with the fun run, which was fun, since my sweetie ran with me, was the Elite Panel afterwards, which included Andrew Skurka.

He’s an interested character, with pretty firm opinions on technique and gear, but he also backs up his opinions with research and data. Love it. One of his articles, Pace charts for TNF 50. And how everyone starts too fast, seemed like a good one to put to the test, using my gps data from the recon run.

His thesis boils basically down to: everyone starts too fast, and you pay for it later. The slower you are, the more you’ll hurt in the end.

I don’t see myself as being an elite running, just a moderately OK one. In this race, I have to keep that in mind. Let’s see my rough data, split into miles: 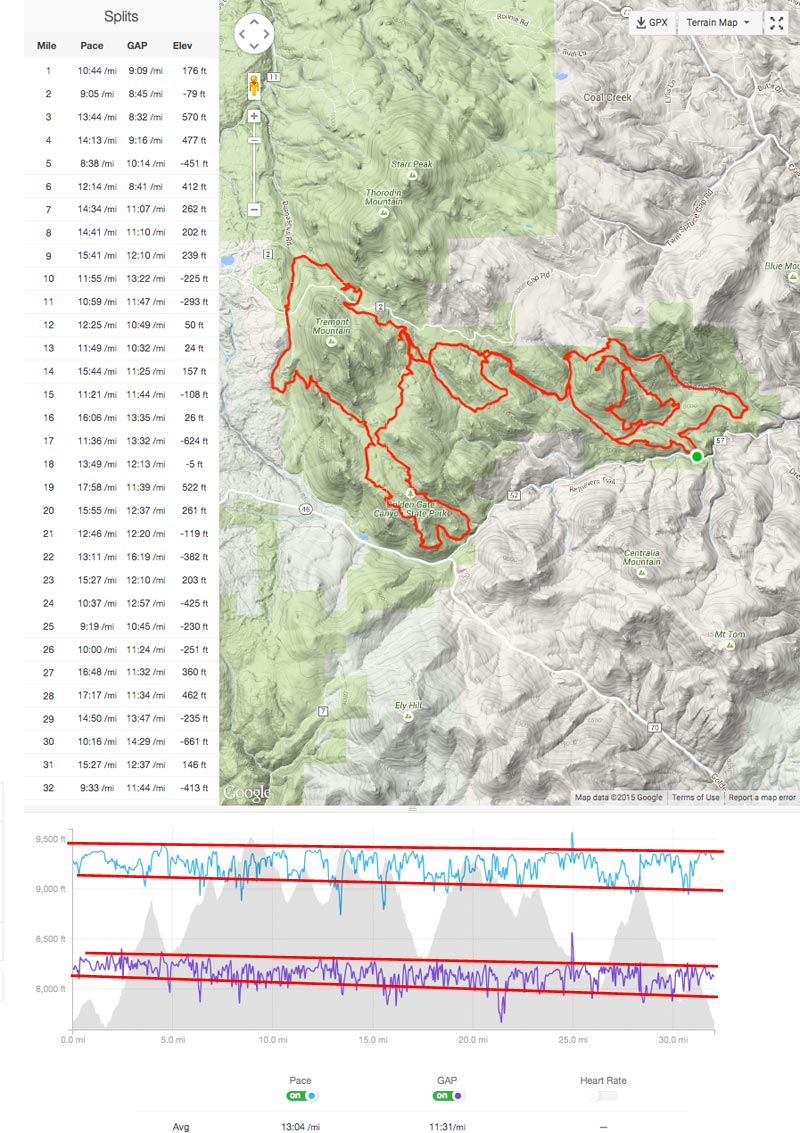 This is weird data to work with, since the pace is all over the place (I stop, I start) and the elevation changes as well. Above, the light blue line is my actual pace. It doesn’t vary too too much, although there is a downward trend. My pace is fairly consistent (slow!), although I’m still slowing down at the end. There isn’t a huge dropoff though. Let’s simplify things: 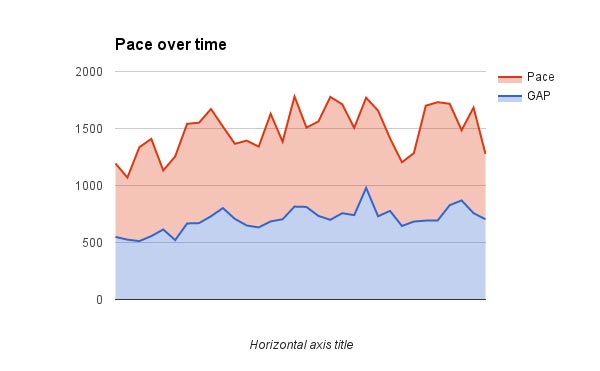 This data removes complete stops, which is weird.

Here though we can see, in this hastily put together table, that my pace (here, in seconds) goes up, as we go through the course. It’s not a huge amount, but it’s certainly not a negative split. It is more than 90 seconds/mile – more like 200 seconds. Yikes.

What to learn from this? Start out slower. My strategy may be to hike the uphills that aren’t a full-on dirty road, until after the top of Black Bear trail, then start bombing. That, to me, is the turning point of the race. If you look at the simplified graph, the fastest pace is the first third – then there’s a moderate slowdown of pace. Thanks, Andrew.