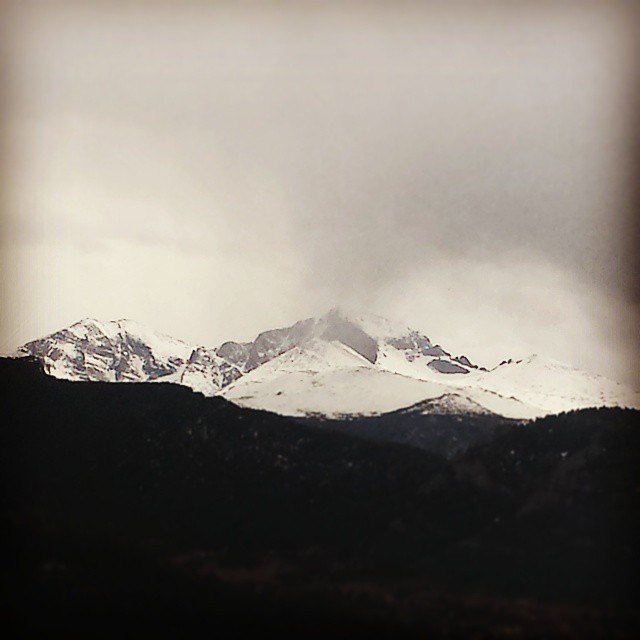 Longs Peak from the steps of the Stanley Hotel, Estes Park

This was a pretty difficult week to get through, as I needed to move to a new house, I had a rehearsal, then to play a show in Estes Park. My Brother was also in town for a few days, and I wanted to hang out with him, giving me another variable in an already busy week.  I knew all this going into the week and adjusted my expectations accordingly.

One of the positives about living where I was living was that trails are right outside of my door! And not just dinky trails; trails up my favorite local mountains!

It doesn’t take too much self-determination to get up in the morning, jog the 4 blocks and begin a nice trail run. Since I was going to be moving in a few days, this was going to be one of the last time I would be so spoiled, possibly for a long, long time. So, I gave my usually run up Flagstaff to Green Mountain a good go, and was rewarded with a time of 1:03:30 to the summit of Green, breaking my last PR by almost 14 minutes. Surely I’m starting to reap the rewards of all that winter slogging.

Afterwards, I did some repeats up Amphitheater trail to the trail junction w/Saddle Rock. Then, a jog home via the streets.

My notes are scarce, but we probably did some climbing at the gym, where I probably hurt my wrist.

Summited Green Mountain for the 50th time this year – the midway point of my goal of 100 summits for the year. This is the 119th day of the year, so I’ve basically summited Green one out of every 2.38 days. Not bad! 1:06:06 for this particular loop – another PR.

Between moving, rehearsal and playing a show in Estes Park, both of these days were off to get all that done. I did stop at Movement Denver for some bouldering, but didn’t bring any rock climbing gear. Movement’s bouldering setup in Denver is pretty touristy, which is extremely apparent after the 5th V3 I on sighted in a row, without chalk, shod in only running shoes.

Stopped after my wrist started hurting again. Wildly overhanging routes are nicer to it, partly because the holds are big. Usually reachy holds that need a pinch are the worst.

Afterwards, I did a little stretching and core work, highlighted by the 4:00 plank I held, with much trepidation and… funny sounds coming out of my mouth for all to hear.

Green Mountain again, up Amphitheater, down Bear Canyon, up via Second Flatiron, Down Gregory. Both nice loops. This was the first time I actually climbed the Second via Freeway in just my running shoes – worked out just fine. This makes me believe my approach shoes are pretty worked and have lost their stickiness somehow and that I’ve just slowly compensated for that by becoming more nibble. So, when it came to try things with just running shoes – which should have OK grip, it worked out well. Hey, who knows. I do remember how touchy it felt the first time up this route, in my La Sportivas rock shoes I’ve had since I was 16 – now over half my life ago.

PR’d the descent from Green to the Mesa Trail junction via Bear Canyon by 2:50, which is nice, even though the trail in some parts looked more like South Boulder Creek. It’s surely has been raining here, a bit.

Another day doing laps on Green – a total of 6 summits for the week! Quite a bit more than I had anticipated being able to do, given the business of the week. No PR’s to speak of, but this was the first time I downclimbed Freeway on the Second Flatiron, and with just running shoes on. I’ve heard of Roger Briggs doing this when he went for the Flatiron Quinfecta and Tony won’t really touch Freeway, unless it’s going down (or so he says), so hey: why not try myself? Turned out to be a ton of fun and actually pretty doable, since if you get stuck, upclimbing out of the problem area is a simple solution.

A little less mileage than I wanted, but pretty good elevation, and six summits of Green is pretty amazing on any week.