Somewhat puzzling, I haven’t mentioned on this site officially that I’m now an Ultimate Direction Ambassador! I utilized the UD Peter Bakwin Adventure Vest on my little 14er Mountain Bike/Run shindig last year and it filled out the exact niche I needed: a pack that I could ride and run in, without being too bulky or heavy – and still make it to the end of the month+ adventure somewhat intact. This ambassadorship means a lot to me and the UD family are wonderful people. I’ve been able to meet many of them on my visits to the UD HQ, as well as on the trails, in the climbing gym, at the running store, etc. The lead designer has some really great ideas brewing and I’m excited to see what comes out in the future.

One of the products I’ve been given to test is the Body Bottle Plus. Think of it as a water bottle (flask, really) that’s made similar to a hydration pack: same flexible plastic material, but in a much smaller size, with a valve to drink out of, rather than to run a hose through. Since moving to Ultimate Direction products, I haven’t used a pack with a large water reservoir as I’ve had in the past. 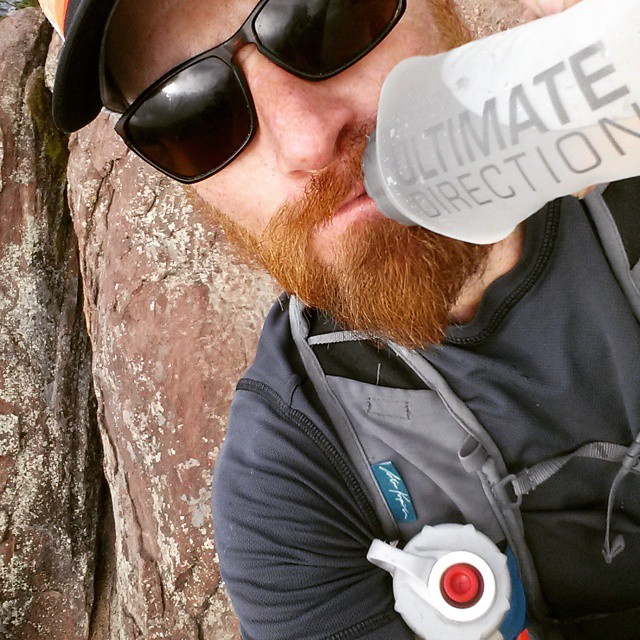 The big reason is those damn reservoirs always leak on me and usually in mysterious places that take forever to track down and impossible to fix. And it is a pain to refill them – something you don’t realize until you find an alternative. Upfront water bottles, like the UD Signature Series have seem to work much better. I also like these bottles since they fit my bike frame’s cages just fine (and I ride a lot of bikes!).

The Body Bottle presents something a little different. Although it doesn’t work in my bike bottle cages, it will work in the pockets up front on all the UD vests. I haven’t used them much for this purpose, as I also like the larger capacity of the harder bottles (I tend to need to drink a ton of water). So, what to use these for?

Two applications come to mind. As well as water, the Body Bottles work well with carrying powder nutrition. I use the Hammer Nutrition Perpetuem product often – usually chocolate flavored and caffeine-free (I add instant coffee for an extra kick and extra flavor, plus I can control the portions). 14 ounces, the amount the Body Bottle Plus holds,  is a lot of powder for mixing in with water and the Body Bottles work nicely – just throw the bottle inside my pack and go. They’re easy to find again, since they have a distinctive feel, and they don’t rip or break like a plastic baggy does. They also magically shrink when you take contents out of them, which keeps my pack from getting too unwieldy with all the opening and closing and shuffling of gear.

The other application is just to use as a place to stash extra water into the back of my UD vest on long runs which don’t have access to potable water. Here, a bottle would really stink, as the hard plastic would indeed hurt my back as it rubs up against it. No problem with the Body Bottle – just take it out, drink it, squish it empty and pop it back into the pack. There’s a nice locking mechanism on the top of the bottle, so they things don’t leak – that’s pretty important, when the Body Bottles are right up against things like my rain jacket and phone.

So let’s do something with these things.

Decided Friday was going to be a long run – I’m trying my best to get ready for the Dirty 30, 50k of single track in the Front Range! Surprisingly, this will be my first sanctioned ultra trail race – I’m just not that much into sanctioned events, and well: bikes just need to be ridden. But sometimes, I like to test out my fitness alongside others, rather than on the somewhat insane tests of attrition FKT’s I dream up.

In this run, I wanted to keep myself moving, so stopping to try fiddle with finding water and treating it was out. The route I decided on was a local test piece: The Boulder Skyline Traverse – a classic line, summiting five of the peaks just west of Boulder. I remember reading about this route on Anton’s Blog way back in the day, when doing such a line sounded preposterous  to me: I just didn’t have that sort of fitness, and Anton was winning Leadville 100’s like it was just another daily run. But I kept it in mind as a way to mark my own progress. Would I ever be able to do something like that? Now I look back, having done a Double Skyline Traverse – essentially a doubling up of the peaks summited, and realize just how much progress I’ve made in such a short time.

My variation Friday was around 27 miles, and 8,000′ of climbing.I tend to need to hydrate quite often, so I had to strategize how to do this on a route that has no potable water.

I locked my bike at the Settler’s Park Trailhead, and brought up just a UD Fastdraw handheld up the Mount Sanitas Trail – the first peak, and descending the newish Lions Lair Trail (long! gentle!). Once finished with the loop, I visited my bike locked again and traded out the handheld for a UD AK Vest I had stashed which had two UD Kicker Valve bottles up front, and two Body Bottle Pluses stashed in the back, along with a light jacket and gels. And off to Flagstaff Mountain I went.

I finished off my first Body Bottle on Flagstaff, and the second after ascending Green Mountain (my 48th summit of Green for the year). Finishing off another bottle on top of South Boulder Peak I then had a whole bottle left for the entire length of the Mesa Trail and back down to my bike, about a half mile north of Chautaugua. Worked out perfectly, and I didn’t stop for more than 30 seconds to a few minutes at each peak to hydrate, take in the views, down some gel – great emulation of aid station stops.

Looking back, the trudge back from the South Mesa Trailhead was probably the low point of my run. You lose at least 3000′ from the top of South Boulder Peak to the Southern terminus of the South Mesa Trail, battering the ol’ quads. Then, you have 7+ miles to run on the Mesa Trail and then finally needing to run down back to the bike on Pearl Street.

Happily, I found a second wind not far from the Mesa/Fern Canyon junction, finishing the run with a 13:00/mile pace. Being now a month out from the Dirty 30 50k, it’s a good test of my current fitness and I can now try to polish off some of the weaknesses (which are many). Of course, I wish I was a little faster, but I’m guessing the course won’t be as grueling. Although it’s approx. 4 miles longer than this run, it has almost 1500′ less elevation gain and it certainly can’t be more technical than all the flood-damaged parts of this route. In all, that should make for a faster pace for me. How much faster is really to be s
een. 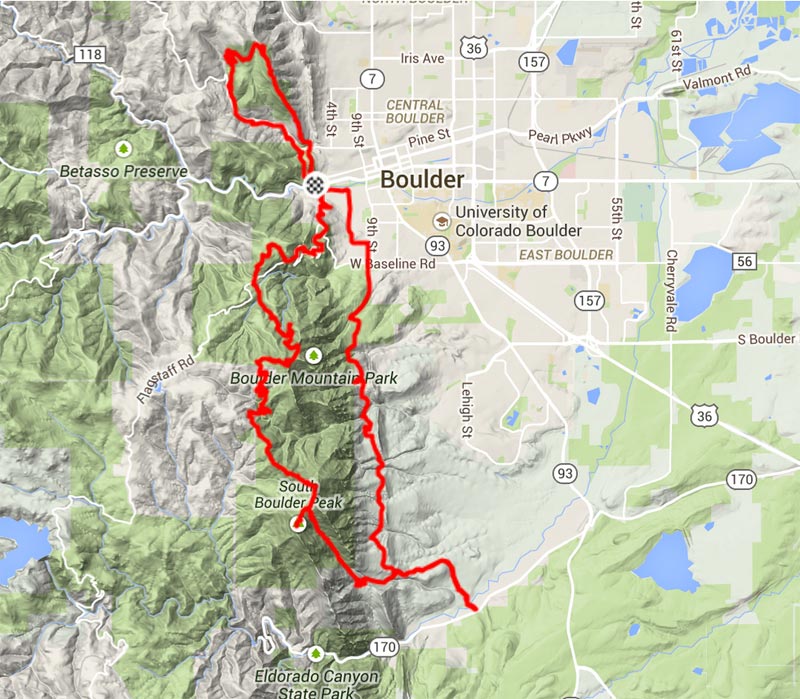 With the help of UD and products like the Body Bottle Plus, I’m really looking forward to my introduction to sanctioned ultra trail racing!

See you out there!