The day before, we finished up a sess. at Turkey Rocks, and I rode the 30 miles from the turnoff to the area, and Highway 67.

This morning, I woke up and quickly packed up camp. Trotted up the well-packed trail until treeline when things got windy. Really windy. Blowing snow everywhere, but hey – we gotta summit. Didn’t have enough clothes on for sure, so stopping for more than a few seconds at a time wasn’t much of an option. My ears and well: face in general were feeling the effects – I’ve never wanted a Buff more in my life (or the wool balaclava I had back at the bike…), but made due utilizing a stuff sack to cover whatever ear was more windward.

To my dismay, the summit house was closed, so I didn’t get to partake in summit donuts, like I did last time on this same route, 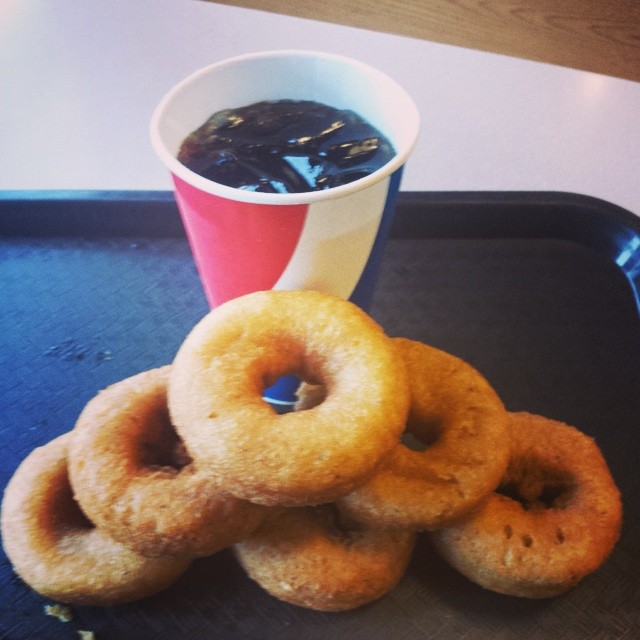 Other than a few maintenance people on the actual highway to the top, saw no one on the trail. Their efforts were probably of no use, with all the wind.

After the run, it was time to pack it back home. Crags to Woodland Park, then Highway 67 to Deckers, turning off to follow the South Platte, then to Evergreen, Morrison, Golden and the busy highway to Boulder. It’s for the most part a pretty outstanding route to ride a bike on, and I’d suggest the Woodland Park to South Platte section to anybody: the road just continues to get narrower and slower and finally turns to broken asphalt and gravel. Nothing to look at but cliffs, the South Platte itself, and anglers within. Ascending back out of the bottom of the valley is sort of a killjoy, as your picturesque route merges into 285 for a half mile, then rockets into Evergreen, with traffic just starting to build. By the time you exit Morrison, you’re back in the Front Range Urban Corridor, which could most likely be anywhere.

On the descent from Evergreen to Morrison, my rear derailer cable went slack – which, shit: usually means something broke. I was optimistic it was just the cable slipping off the derailer’s tightening bolt, but when I stopped in Morrison, it appears that the other end of the cable broke off from the shifter itself – not something I could easily fix. So, to keep things moving, I rigged up the rear derailer with a little string I always have in my bag, so that it was guiding the chain somewhere in the middle of my cluster, rather than guiding it into my highest gear. Although my talent at single-speeding has been proven time and again, I wasn’t too stoked in trying 34×11 for 25 more miles – I was, as they say, pretty hammered. 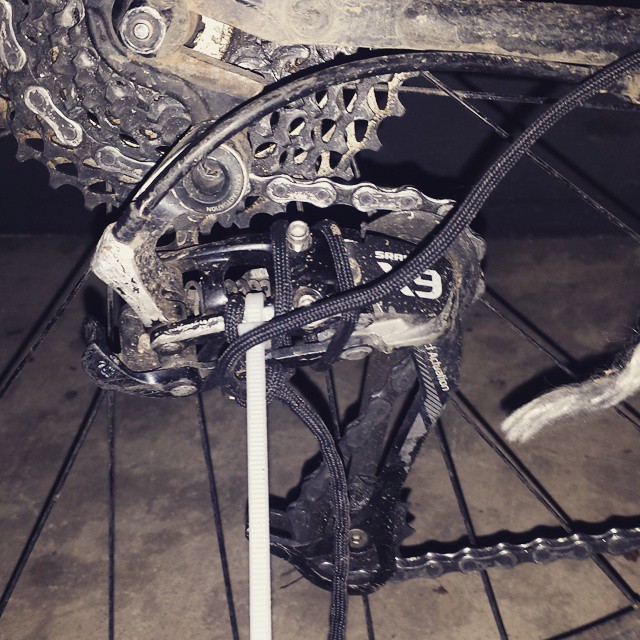 Relax, this will work.

The rest of the ride was somewhat of a slog, but I wanted to get it done, rather than bailing in Golden, taking the lightrail to Denver, and then the bus to Boulder. THAT idea would have taken longer than just riding a hobbled bike. The wind continued to pick up on the now barren plains, then the weather made itself known as I was pelted with rain, then snow. Minstrels blew me off the road a few times, but I just grunted it out and persevered, making it home around midnight. Long day!

Not that I thought I could recover from that sort of day easily, but I took a small hike up Sanitas, more to be on the trail some more, than anything else. Afterwards, I went to the gym, and did an easy session of climbing.

Feeling pretty beat up, so I took ‘er easy today. Instead of anything too active, I fixed up the bike, and rode to Flatirons Running to support the Ultimate Direction crew and watch Scott Jurek give away tons of gear and answer some questions. I ran away with some cherry juice and an Avery beer! Also bumped into Buzz, who is just back from California. 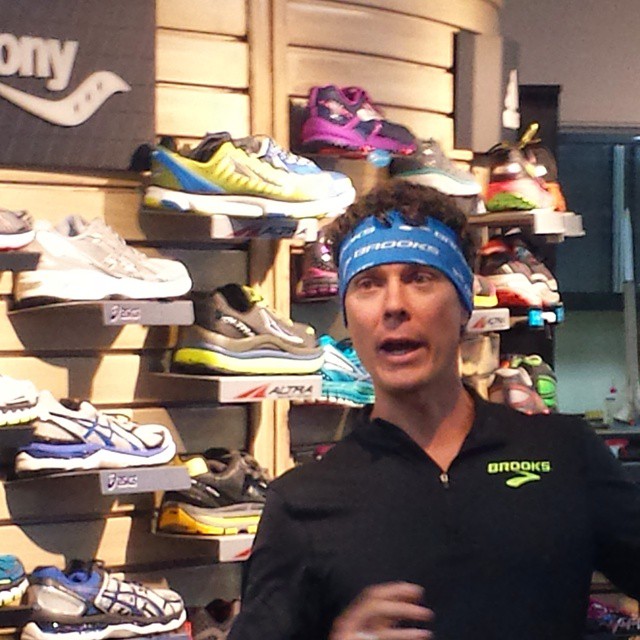 Scott Jurek, not eating or running at the moment.

Thursdays have become something of a Big Day for me in the week. Spun up the bike to Denver, checked the mail (as well as attempt to get my PO Box back after flubbing my renewal), then to Movement for a Bouldering session. Managed another V5, after just a little bit of effort,

Which is good!, for a lightweight like me. Left wrist has been hurting me for a good while now, but I’ve just been working through it. Probably for the worst, I’m sure.

After band practice, I took the late night ride home to Boulder, and another day ended at midnight. Still beats taking the bus. Two bright, red, rear blinky lights makes all the difference.

Getting up before work after ending 40 miles just wasn’t going to happen. Spent the night taking care of my sick lady.

Another day, taking care of the sick one.

After breakfast, I took advantage of the gorgeous day, and did some scrambling in the OSMP. Started on Freeway on the Second. Got about 10 feet in, before realizing the person climbing down to right of my line was Tony! So there we were up a few dozen feet just chatting away, as onlookers gawked below, like they do.

After Freeway, made it to Baker’s Way -> North Arete. Totally flubbed the downclimb off the First – couldn’t figure out the last 10 feet to save my life. It would be nice if you could just jump from there or whatever, but it’s unstable and angled ground with boulders and fallen trees and all sorts of nonsense to make that a no-go. I’m strong enough that I can hold a static pos
ition for eons, but the mind just couldn’t figure out something it has done so many times before. Such a cloudy head sometimes means the onset of a cold, and it would be no wonder to me where I was to have picked that up. Ugh.

With that, I took the N descent cross country from the back of the First, and got on the First Flatironette to The Spy, to attempt to feel better about scrambling today. Didn’t go so well. Getting back on the Spy was less than comfortable, as the weird ramp you can take after getting off the Flatironette seemed improbably hard for the 5.2 grade. After finishing up the Spy, I called it and opted not to do the North Arete and downclimb on the First again. Still wanted to do a little more scrambling and tag the summit of Green, so I started to run down the trail to the base of the Second to take Freeway for a spin again.

Being Sunday, the trail was mobbed with people and I was being indignant, hopelessly spoiled for usually have the park all to myself on the weekdays, that I decided to just climb UP the talus field directly above me and – well, somehow loop it back to the start of the Second. Really, I had no idea. To my surprise, the talus field wasn’t really all that bad and I found a shadow trail that did exactly that, leading me to believe I know this park far less than I assume I do. It’s literally an amusement park for more serious alpine adventures.

Did a lap of the Second, then took another social trail (this one not so secret) to the summit of Green, not without bumping into Eric along the way, who was also enjoying the day, after skiing in the a.m. The dude is fast.

Pedaled home, stuffed a bunch of food in my mouth, packed my bags and by 5:30, I was back on the bike, this time to the Longs Peak TH. Instead of having marathon day of riding to, climbing Longs, then riding back, I thought I’d break it up into two days, getting a good 6 hours of sleep in before taking on Longs by foot. The expense is that I had to schlep my sleep system and a bit more food along for ride which – given the 5,000 feet of elevation you gain just getting there, isn’t nothing when it comes to effort. The weather was looking great for a summit of Longs, but I didn’t have an ice axe – I left it two weeks ago on the trail, right at the Keyhole. So, this trip was to see if it still was there. If it was: great, I can summit. If not: it sure was a long way to find out!

Not a bad week, amazing what you can do with three entire days off! Still, it’s not supremely optimum, as it seems I was beat up for much of the week. As April comes, my plan is to fold in speedwork to this hopefully sizable base I know how and get ‘er ready for the Dirty 30 in May!