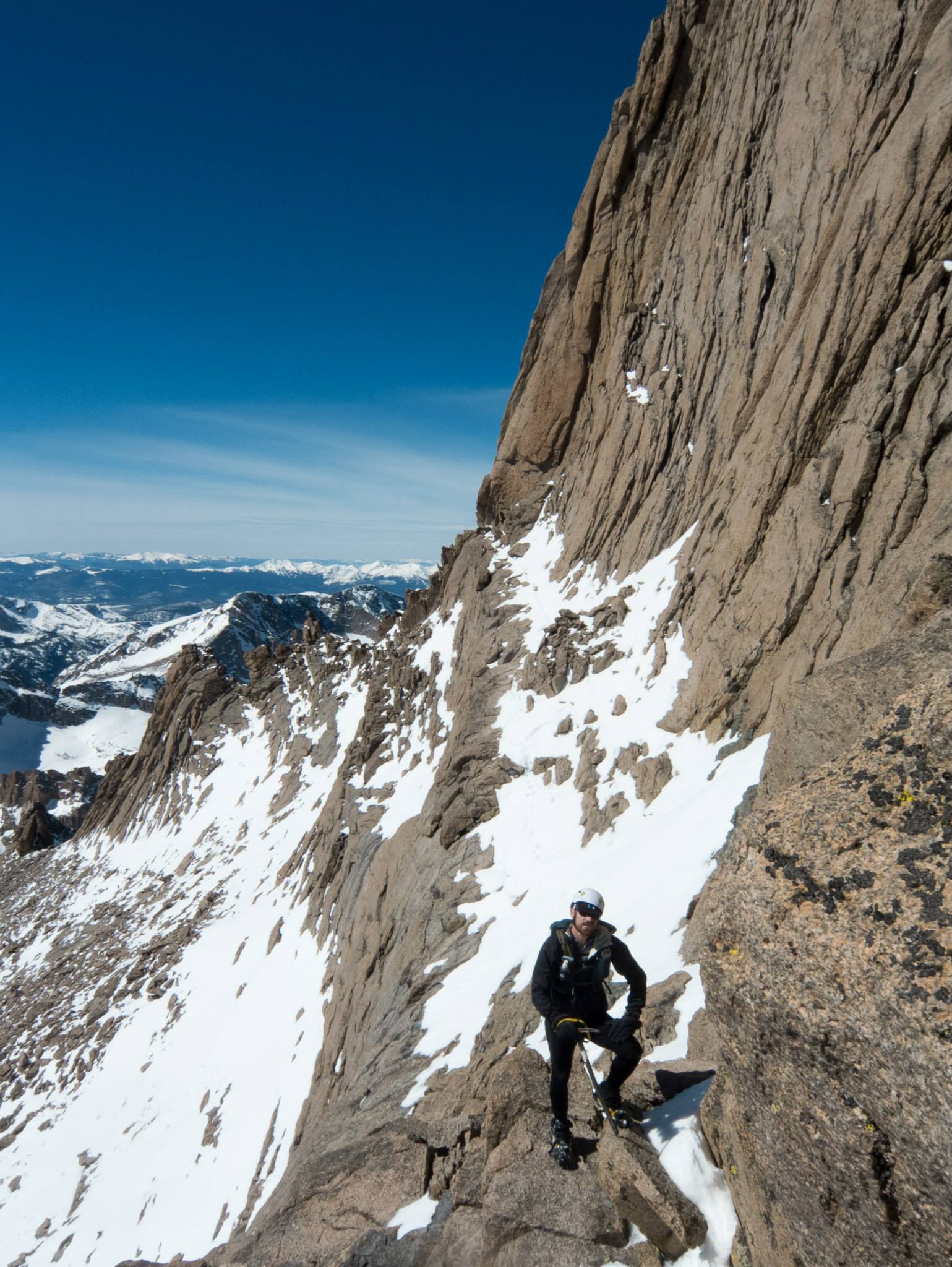 A very long day on Longs Peak. Left Boulder around 2:00 am on the bike to meet up with David around 6:30 am. The snow conditions were, shall we say, less than ideal, so David wanted to bring some gear just in case.

Bike ride up was wonderful – I do love being alone, in the dark and just slowly making my way up 4,000+ feet practically alone on the road, through its twists and turns, being enveloped by the canyon walls around me. It was incredibly warm though and I had to take off a few layers of clothes before hitting Lyons and the big climb. Surprisingly, I was a half hour early, riding as I did a half hour faster than last week, despite having schlepping along my harness and several slings/’biners.

We made our way to Chasm Junction without too much difficulty, but started slowing down – way down, once we started climbing the Loft. The snow felt safe enough – just powdery, so each step meant sinking down about 8 inches. The traverse over to the ledges on climber’s left was a bit spicy, as the angle of the snow did not really give much security towards the cliffs below. We found the right gully to descend despite not seeing Clarks Arrow (I’ve never seen that thing), and were faced again with traversing over questionable snow out of Keplinger’s Couloir. By the time we got to Homestretch, we were peeling off clothes as the sun was out in full force. Made the summit. Hurray! Couldn’t have done it, without teaming up with David. 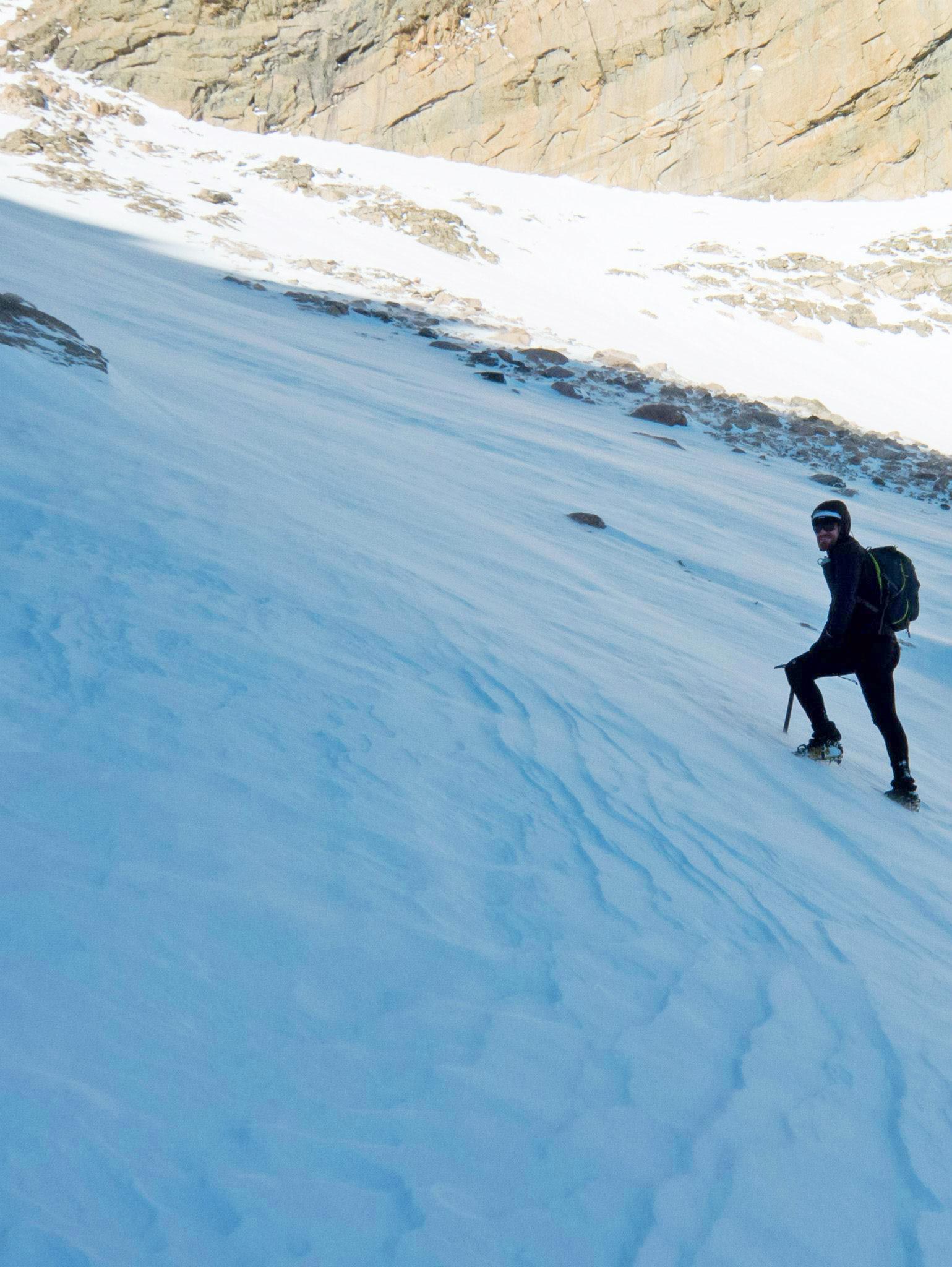 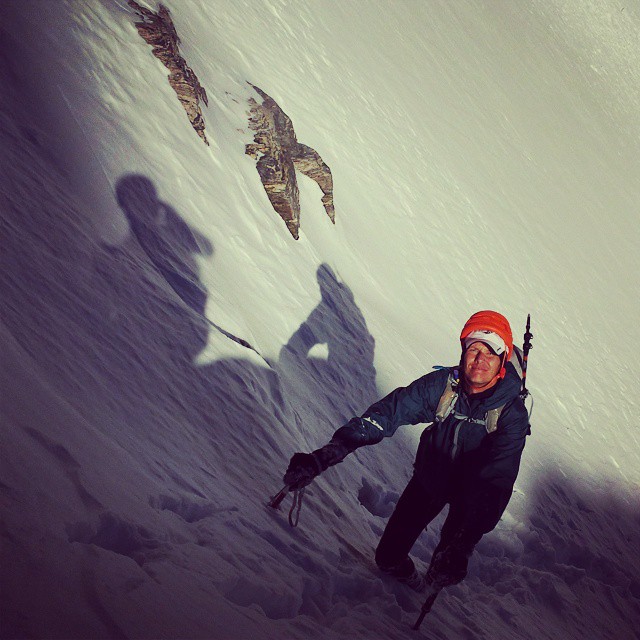 Gets a little steep on the exit ledge. 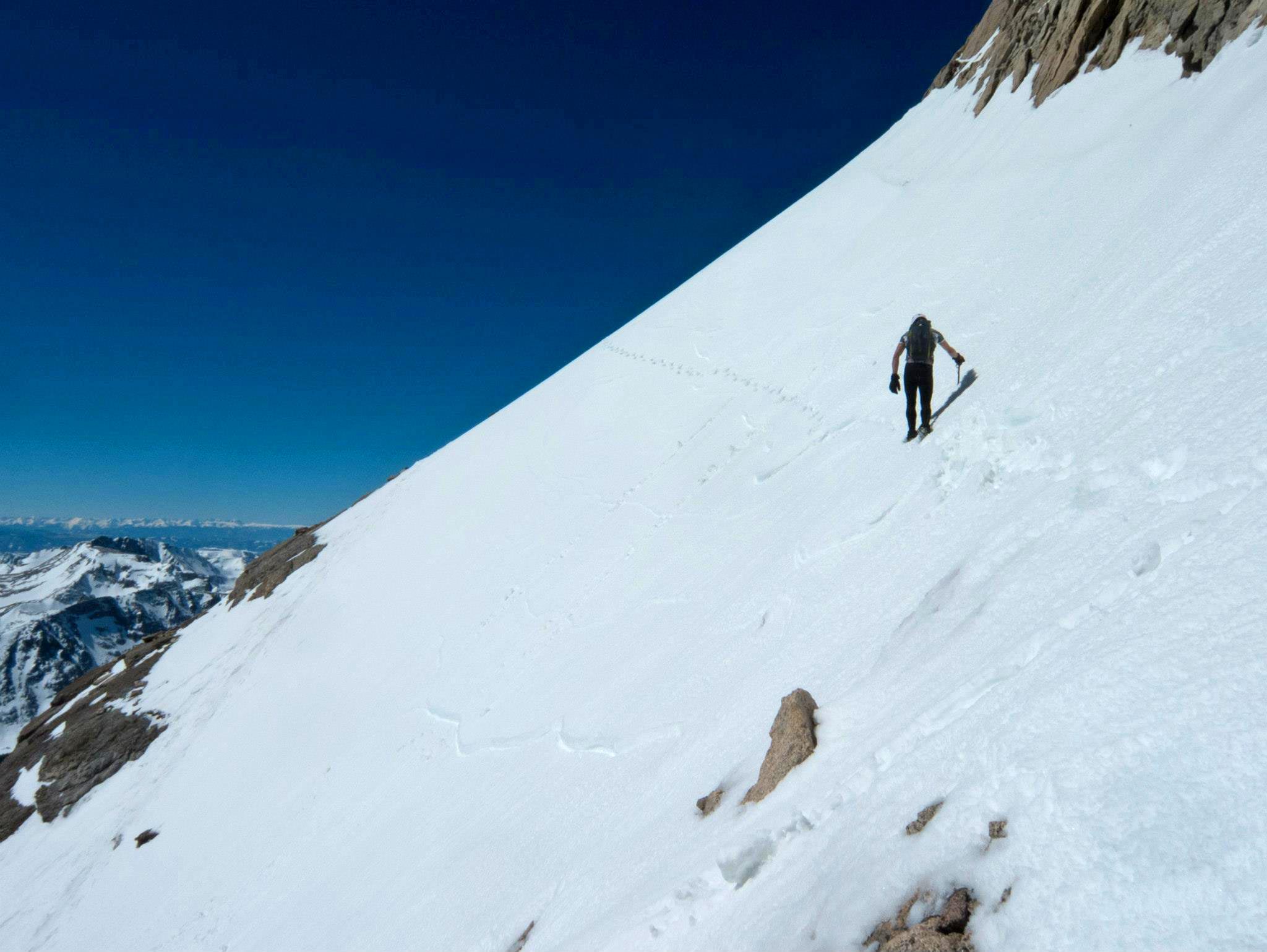 We discussed our strategy for getting back down, as we had many options: leave the way we came; rap. down Cables; take the Keyhole. The Loft route sounded long and the snow conditions weren’t crazy good and were were worried about finding the rap station for Cables. So, the Keyhole it was! Descending Homestretch, David slid on a particularly slushy section, but self arrested successful after a coupla-dozen feet. Whew. Sealed the deal for the Keyhole.

The first snow field to cross on the Narrows seemed to be your textbook wet slide terrain trap: the deepest, wettest, steepest section was right above a very high cliff. We decided to rope up and belay it – which sounds laughable on the Keyhole Route, but it seemed prudent. After that one section, it was slogging as usual.

We reorganized after getting to the Keyhole itself, pondering the long slog back, and that’s where I managed to lose my ice axe. Sigh. I’m almost sure it’s still there, if I go back to check – which! I may.

Another uneventful jog back to the trailhead ensued, happy we both were with getting a winter summit of Longs. Even though it was warm, my opinion is that it didn’t take away from the difficulty, as the snow was anything but benign. David offered a ride back in the van – it was 5:30pm! And I accepted. I kept nodding off while David drove. I’d rather be riding the bike back – the lose of 4,000+ is definitely the payoff for climbing up 4,000+ feet, but it just getting too, too, late.

Recovered from the day before with a brisk hike up Bear Peak, as the sun was setting. Recovery days are sort of the best – far out weight doing absolutely nothing. I do typically enjoy ambling about with no real agenda or time goals – the legs just need to move about. I continue to notice and discover things about the OSMP that I never knew before: seeing a well-trodden trail from a different perspective, or a rock formation in the waning light. It’s truly a very special place.

Another sunset to night run – would’ve gone for Sanitas on the way home, but the gut wasn’t feeling it – had to stop multiple times to… adjust the bowels. Happy with the pace. Hoped to get a good feeling for where I am, but alas: thwarted.

Felt pretty beat up, so I neglected my bike ride out to Denver this am, and just caught the bus. Pretty solid bouldering session, including a V5, which is more reflectant on the extremely soft grades of this gym than anything.

Still, it was a good problem. For the most part, the problems at this gym are overall pretty amusing. Spun on the bike machine for an hour as recovery #2 for the week, and then tried bouldering some more in just my running shoes.

This turned out to be a pretty fun time, as the problems I could do tired and faux-shodden were necessarily easier ones. I found that basically I turned all the problems into problems with bad feet, and the game then was one of skill and technique where you had to utilize the footholds you had with much consideration and stretch your body in ways that relieve the added force on your hands. It’s not uncommon for your feet to slip anyways and it’ll be your core that has to compensate and stabilize your body, so that you can recover from the bobble and get back into position on the wall.  Managed to get up to a V3 problem. Overhanging problems are easier, as it does get tricky when trying to smear on little chips that want to be instead edged. For all running shoes are good for, edging isn’t one of them.

I talked to Chrissy about this idea, and her more educated and regimented take on this all was that it wasn’t a good idea: most climbing coaches will say to practice with good shoes, since sloppy shoes can indeed promote bad form, and reliance on your arms too much. I see this point, but for someone that has and will alway have a weak upper body, if you mind that what you want to focus on is your core strength and being creative with the feet you have, it’s a good way to make the entire process even more visceral than it is – you just really need to think on problems that you would instead just mindlessly plow through.  Plus, it’s a lot of fun. 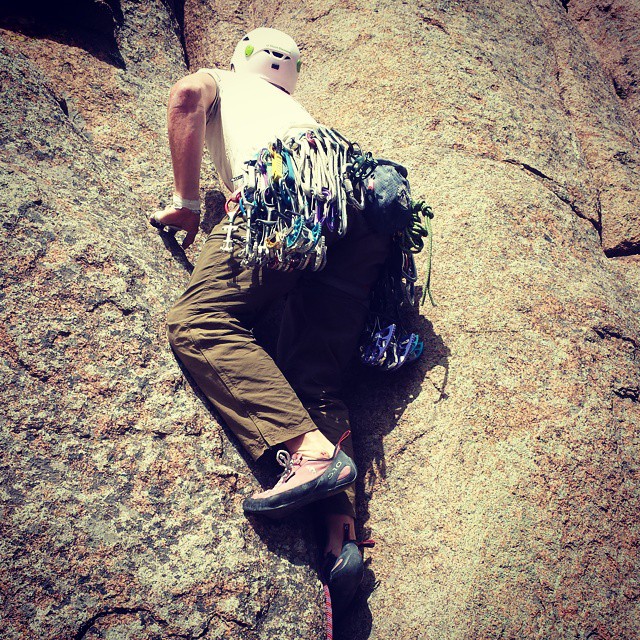 Chrissy and I drove to Turkey Rocks, to work on our moderate trad crack climbing skillz. Led a few 5.6’s and a 5.7 myself, with much grunting, cussing, and removal of skin on all parts of my body. We’re already considering going back next weekend. Chrissy’s jam (no pun intended) is trad. climbing and her summers seem to lean on spending weeks in Squamish. I think since I’m  weak in the upper body, I tend to gravitate towards styles that, you know, don’t need it. We were both eager to get on down to business. Our very first climb was a 5.9 offwidth, which may have been a mistake. We dialed it back slightly after that, but both left with big smiles on our  faces. After climbing on Sunday, Chrissy dropped me off on the junction of Highway 67 and the turn off for Turkey Rocks, and I rode the 30 miles to Crags, to bivvy all by my lonesome, for a run up Pikes Peak.

We’re only a few days into Spring, which is pretty early for me to start bivvying out in the open, but I was extremely comfortable and incredibly content with the weekend, saying nothing for the week. The campsite was desolate (closed, in fact) and I was warm as could be in my dialed in sleep system. I greatly anticipated the next day’s challenging adventure: could I run Pikes Peak, then ride the 100+ miles back to Boulder? I think I knew the answer.