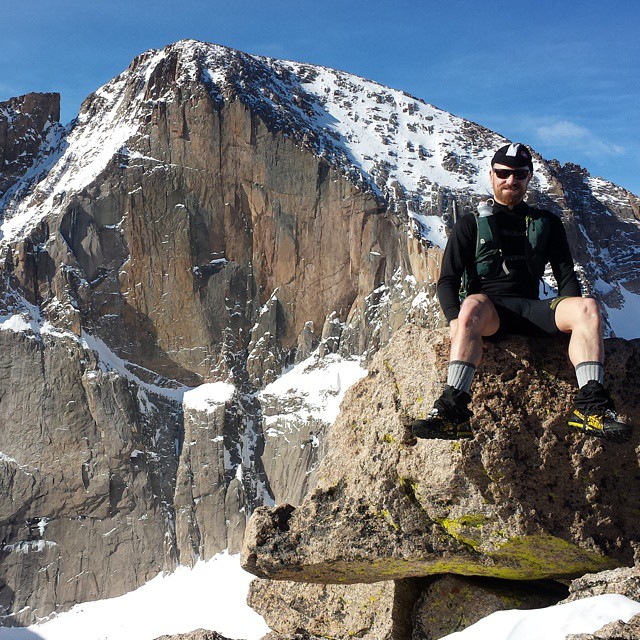 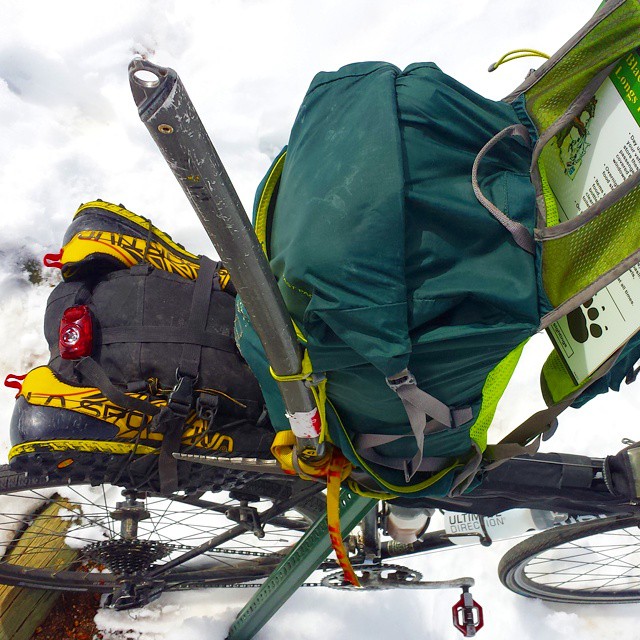 A pair of shoes, a beat up bike, and one fancy pack gets you to a few places high up in the mountains

Conditions in the OSMP’s have been fun! but a little slow, so I thought I’d check out the back side of Green, and see if the conditions were feasible to put a little – I dunno, hard effort into my run today, rather than very mindfully trying to stay somewhat aerobic. It’s to be noted that staying aerobic, when gaining 3,000 feet of elevation is pretty impossible, but I’m purposely trying to hold back to add on to my aerobic base. I feel I’m failing at this completely and it would be better for me to just run on a more level route (which is boring) or ride bikes (which I love! but it’s not running)

Anyways, I wanted to peak under the covers and see how all my training was doing. I was happy with the outcome of this run, as it was at a good clip, and the conditions found were exactly perfect or anything. Part of the trail still ha to be post holed through virgin snow, as most everyone else going this way decided to just take the direct line up a few switchbacks.

Descended Green in 17:55, which is amongst my faster times. That’s almost 2.2 feet lost per second. Running. When people think running is stupid and boring, I dunno – they’re just not doing it correctly or something.

Man. Sometimes the crux of a trip is just trying to get a good night’s sleep. When you’re roommate has Tues/Weds off, this can be difficult to manage.

Spun the bike up to East Longs Peal Trailhead leaving at some stupid time – 2:00am, I reached  the parking lot at around 6:30am, right when the sun was about to rise and turn the sky a spectrum of brilliant colors. Even before reaching the turnoff for the road, I saw in front of me one of the most brilliant sights I’ve seen in the sky, ever: a large, bright fireball streaked across from East to West; looking exceptionally enormous and fake like it was some old film prop from a silent picture. It seemed so large and moved so slow, I was sure it was either an ICBM about to land on top of Longs Peak and destroy me in a matter of seconds, or my perspective was way off, and it was a roman candle being fired from a house just on the other side of the road. If you want a reason I negate sleep, endure a rowdy roommate who disrespects me and ride a bicycle so far – despite overwhelming pressure to own a car: here you go. Seeing huge fireballs in the sky.

Once off the bike, and after I unfroze my fingers, I made my way up and summited Mt. Lady Washington, now stripped down to my bike shorts. The weather was some of the best I’ve seen on the mountain, which is notorious for anything but. I snuck my way onto and through the Keyhole, but the snowpack was less than ideal: a good 4 inches of hard wind packed slab, then a sugary layer, then another 4″ of hard pack and another sugary layer. Seemed to do the that for a while, so I called it. I hadn’t any expectations anyways, so I jogged back to the trailhead, and rode the 40 miles home.

Certainly, I’ll be back – nice to stretch the legs on the bike a bit.

Wanted to wander over to the Second Flatiron, so that’s what I did. Some snow at the base, so I started much to the right – unusual for me, as I do tend to trend left, and follow the main rib as early as possible. Although the start seems a bit stiff for the Class 4 rating it’s given, I think once you have wired the hard bits (there’s that tiny crystal/that slight depression/hidden crack), it’s goes pretty quickly. Fun to play on the rock in parts I usually shy away from, though.

Sigh. I was chasing the rain running up to the base, and the rain this time: won. I made it up a few hundred feet of the Second before I called it, as the rain started affecting the stickiness of my shoes and I had thoughts of death delightfully dancing in my thoughts. The Freeway route, known for being an easy scramble is also known for being an easy bail – just walk off! And this is easily bullshit. Maybe I just take weird lines, but bailing off is nothing short of traversing over hundreds of feet to your right or left and the climbing is now easier doing that, than straight up. If you’re too high, to the left is the gully that separates the Second from the South Block; to the right, the Second Flatiron gains elevation and overhangs the trail. That’s where I found myself, so as well as traversing over in the rain, I had to down climb to where the trail was reachable. A hoot of a time. Tagged Green and of course the weather changed for the better and to work I had to go!

I think in the evening, I also went to the climbing gym, but kept it pretty casual, as my wrist was still giving me some angry feedback on its current state.

After my run, I showered, ate breakfast and visited the HQ of Ultimate Direction! Met up with the Marketing Maven Marily, saw some top secret projects that left me pretty excited and grabbed some coveted gear, including some new Body Bottles and a FastPack 30 the latter of which begs me to take it on the Colorado Trail on a unsupported go at the FKT. In all sincerity.

I’m not a particularly vengeful person, but I wanted to get back on Freeway, and give it a good go. Plus the weather was incredibly perfect out. Did five laps on the Second Flatiron, before tagging Green, going back home, buying a pie and celebrating Pi Day.

Slept in and climbed at Movement for a little while. Wrist feels pretty much good to go – a little tenuous before I was fully warmed up, but repeated an 11b back to back without too much bother. Later, finished up a V4 I was having problems with on my last visit, which is always nice.

Pretty honest week! Springs certainly breaking down the door in Boulder, after a snowy February and I’m seeing some of the flowers I’ve planted from all the trudges and slogs I’ve done this winter. I honestly feel I’m in the shape I was last year in May. In May of last year, I felt I was in the shape I usually get around July. Makes me excited for the summer.

I do have the
goal of running 50 miles a week in March, which I haven’t yet been able to reach. But with all the cycling and the fact I spend so much on running up mountains, as well as technical climbing, I’m more than satisfied with this week, as I’ve also kept up with my own work expectations/goals and social interactions (although I missed the CDT Ruck, which was a slight bummer). Looking back, if I gave any more, it would have been too much.

I’m now also signed up for the Golden Gate Canyon Dirty 30, which is the reason for all this running. I hope to give it a good effort and finish strong – obviously I can do the mileage, it’s now more of a question of how well I can sincerely perform when toeing the line at an event that’s a little alien to me, as this will be my first trail race ever. Starting April, I plan on adding some actual speed work and try to get my leg turnover at a point where I’m not getting dropped at all the easier sections of the race, after having just dropped those same people on the climb. If I can do that – just get my actually running times up to an honest running time, I could potentially surprise a lot of people.