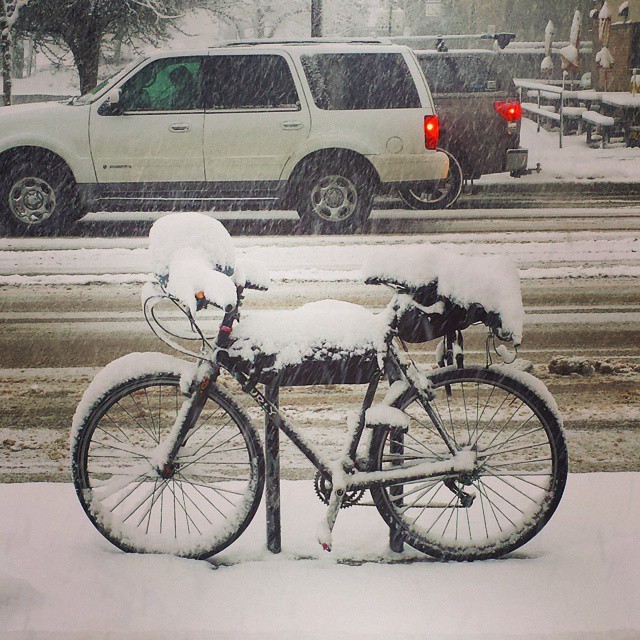 Winter decided to make an appearance this season. Finally.

Whoa – OK, missed an update one week. I’m pretty proud of the streak I had going. Let’s try to summarize:

I had practice in Denver, which usually means riding bikes from Boulder to Denver, and maybe back, but the weather had other ideas, so I bussed it, pretty early in the morning. Made it to Movement and did a pretty intense session of Bouldering for 3.5 hours, before hitting the stationary bike thing for an hour. I also remember repointing the V2 I was having trouble with before, without any trouble at all (a nice feeling) and eating an entire strawberry rhubarb pie I had bought at the store, shortly before (also, a nice feeling, and then not a nice feeling). The V2 was an overhang with a start that wanders forever, slowly tiring you out, and then a big ledge to pull over, a small intermediary hold before the lip and then: the lip. I just didn’t have the strength before to grab that last hold.

AND SO BEGINS my assault on Green Mountain, and it seems, only Green Mountain for the next two weeks. This was #22 for the year, with my goal being 100 for the entire year.

Night time is the right time to indulge in peak bagging

There was like, feet of snow on the trail.

And that’s basically where this week ended, as I had a show on Friday.  Performing is actually an incredibly physically taxing ta do – lots of jumping, and holding heavy things. It’s good times, but by the weekend, I was pretty wrecked.

After climbing a bit, I surprised myself with doing laps on some of the bouldering problems, cruising up V3’s. I then took on the spin bike for about an hour.

Spinning on a bike that doesn’t move for 2 hours sounded like a great idea this night. Then bouldering, where I managed to realized how I had overdone things on Sunday – hurt my left wrist enough to stop. Oh, bouldering.

Freakin’ cold night, but I managed to run up and down the whole mountain, despite the snow being soft and bringing along a few lbs of clothes.

Whatever made me decide to spin for another two hours, soaking myself in my own sweat indoors, I’d like to know. The weather must have been utterly horrible.

After spinning, I happily changed clothes and did a pretty long core workout. No climbing, wrist still pretty bad.

Not a bad run – did my best impression after summit #2 to go down fast back home.