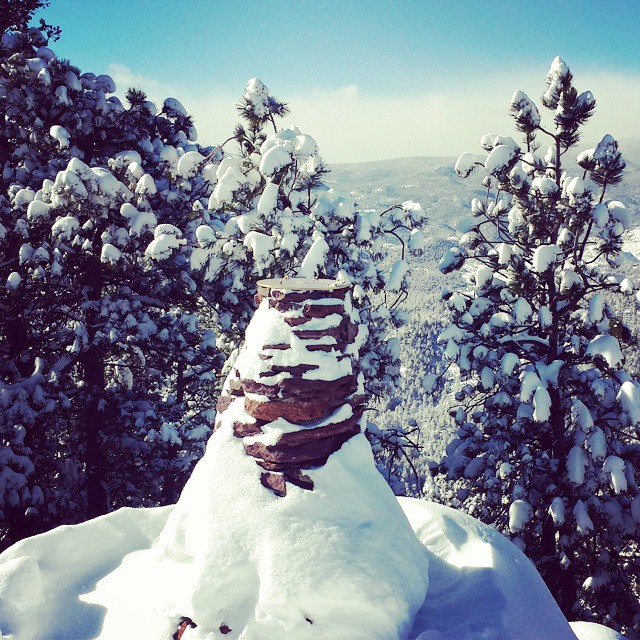 Succumbed to a stomach bug this week, rendering my super powers useless.

It snowed recently, so riding to Denver today, as I have done the last few weeks on Monday was not super realistic. Still, made it to Movement in Denver to boulder in their super huge and well-spaced area for about 3 1/2 hours.

The usual for me.

Worked on getting more confidence on lead, while my partner worked on ARC training.

Turned out to be a pretty beautiful day!

Started with Boulder, ended in some top rope climbs. Nothing too incredible to report.

Started out feeling pretty outrageously bad, but as things tend to do, if you start you feel better, and you’ll finish feeling great. Not so today. After walking up Sanitas, I decided I couldn’t really do much but walk back down and I did that, with much difficulty. My plan this day was to at least do Sanitas, Flagstaff, Green, Bear/Sobo, but after my weakness on Sanitas, I thought just tagging Green would work, and then back home. Woo boy.

Walking up towards Flagstaff, I still didn’t have any umph. Running was def. out of the question. My thoughts went from, “just tag Green” to, “just get to the trail junction, so you can go down Gregory Canyon”, and that was enough of a goal to keep my wondering if that was even realistic. Once at the Gregory TH, I continued to simply walk home, take a shower and call it a day, really. This was the first time I’ve ever planned on summiting Green Mountain, but couldn’t find the strength to do so. I really had no words.

The weather this night was the start of an honest-to-goodness snow storm. Perhaps the first of the season for the area. Weirdness all around.

I awoke feeling pretty OK, all things considered. It didn’t take too much to annoy my stomach though – a glass of water after waking up. Afterwards, I was pretty much collapsed into myself for the rest of the morning, bending at the waist.

After forcing some breakfast of plain oatmeal down, I basically went right back to sleep for a few more hours. Waking up, I tried eating a Clifbar, which worked out OK, so I had 2 more, and escorted my lady to the gym to try riding on the trainer.

I’ve never, I think in my life, felt so bad while riding basically a bicycle. I had no power, nor strength, nor endurance. I had to stop after barely doing a half hour, at a very low  resistance, pedaling at barely 60 rpm. This, I thought, was how it felt to be dying. I’ve literally have ridden a bicycle for days on end, with catnaps to keep myself from hallucinating to badly. Not being able to finish an hour is not even thinkable. But, there I was.

My stomach felt alright, so my only realistic idea on why I’m so weak is because I just haven’t been able to eat all that much and whatever I’ve been able to put down, just hasn’t been able to be digested properly. Properly defeated, I waited for my lady finish up, and we walked back on home.