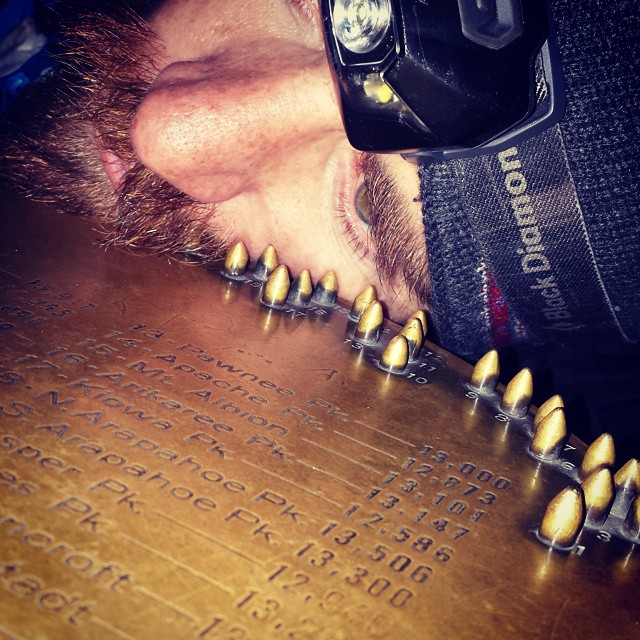 I was still feeling pretty tired in the legs – they didn’t really want to turn over, but I needed to grab some gear I had inadvertently left on the trail, on Sunday. So, after work, I decided to take a nice, slow hike up, in hopes that that would help with recovering from the pounding on Sunday. It was a beautiful night, and I enjoyed taking it easy and poking my head on the little use paths around Gregory Canyon. Happily I found my gear stash – no one took it, and I didn’t hide it so well to fool even myself.

Saturday, February 14th, 2015 – Slabmongering (Strava)
Felt very much recovered and hungry to get outside before the weather turned on Sunday, I ventured out with some slabbin’ in mind.
Took on Freeway on the Second as a warmup, and then moved on to Bakers Way, topping out on the First via the Awkward Slot to the N. Arete. Once finished, I jogged down to the start of the First, but it was kind of crazy, with multiple roped parties sharing belay ledges that I opted for the First Flatironette, to the Spy and back to the N. Arete. I started out maybe 50′ from the end of The Spy, so lower than the usual start for the N. Arete, making things a little spicey to start things off. Took the Awkward Slot var. again which had a party on it (every other variation also had a party on it!) and topped off the First, downclimbing once again. I did a quick lap of Green Mountain and down again, back to the Second to check out the Dodge Block route. Amazingly that route also had a party on it – this is unheard of in February. They were on the 5.6 headwall pitch, and offered me to pass through, but I decided to dodge both the block (Pullman Car) and them, but going between on an extremely awkward alternative line (complete with piton sighting). This took me to the base of the tunnel arch, which I naturally wanted to go through, rather than pass by. A great choice. Finished off with a quick trip up the West Face of the Second to watch the parties on the First one last time.
Since I neglected to bring any food today, I had to pack it in, and get ready to play a wedding later that night, funnily enough. Tons of fun, and I hope to repeat much of it the next day.
Sunday, February 15th, 2015 – Flagstaff, Green, Bear, South Boulder (Strava)
I woke up a bit later than I wanted, and the weather report forecasted… snow! The sky outside my window looked beautiful, but I made the decision to pass on the climbing today, lest I get stuck in the middle of the First Flatiron, as the snow started to fly. Sigh.
Decided to summit Flagstaff, then drop all the way down Gregory Canyon to the TH, and then go back up Green Mountain. Passed Scott, while doing so. Good running effort up Flagstaff. Took Amphitheater to Saddle Rock, keeping the running up, which I did, until the ladder, where the ice started to be found on trail. Good effort. Ran into Tony at the top of Green and chatted a bit. Man, you can feel the energy of his excitement, when he talks about his outings. Unlike me, he did in fact get up early to do some scrambling while also summiting Longs Peak not too long ago, reporting pretty thin conditions when it comes to the snow.
I took off down Green Bear to the Mesa Trail to again drop some major elevation, before going up again. Surprisingly, I found myself in back of Scott again! I’m not sure where the heck he could have been when I was descending and ascending Green. Scott continued down Mesa, once we hit the junction, and I went for Fern Canyon, at a much more labored effort. Fern is pretty steep and although I was hoping the gentle downward trail leading to most of it would help with recovery, it wasn’t enough to allow me to run up Fern, so I power hiked up to the summit of Bear Peak, and then a click to South Boulder Peak. From there, I took Shadow Canyon down and ran back home. Pretty tired legs on Mesa, so even though the terrain was the easiest of the entire day, I had to power hike, much of the uphill parts. Still, the final few miles were fairly strong, and I kept something of a pace up, finding a second wind of sorts.
This week was a little mixed, but I wasn’t too bummed about the extended rest after doing the Double Skyline Traverse. I felt pretty bad right after that outing, and was surprised I was even able to ride the next day. Still, I was able to tag Green Mountain three times this week, which seems to be about average for this year.