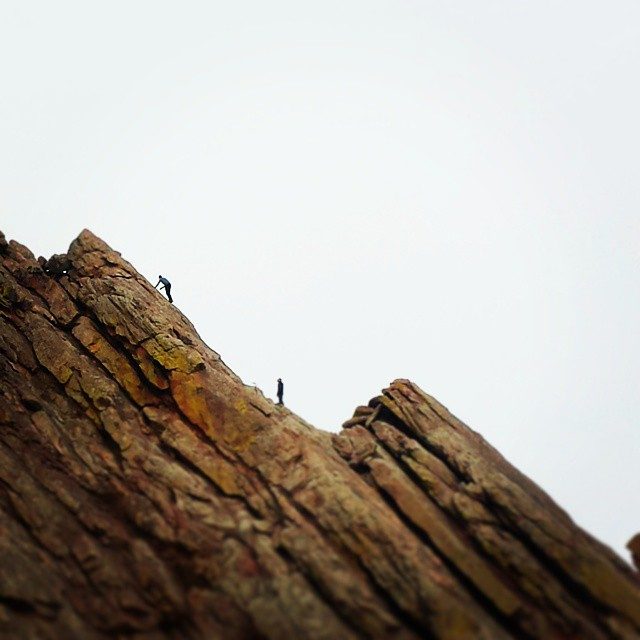 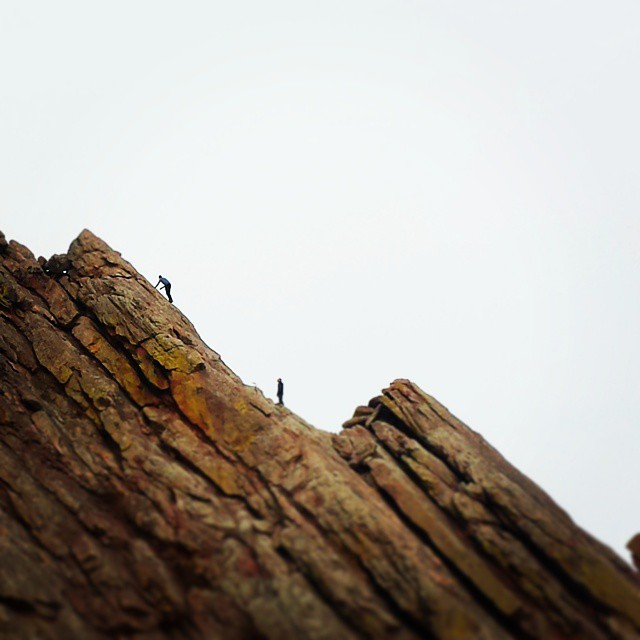 Soloists on the First Flatiron.
Monday, January 27th, 2015 – Flagstaff, Green, Bear, South Boulder (Strava)
I mean, what the hell – let’s run up some mountains.
Ran into the RMR group going up Green, as I was going down. Guess a lotta people decided to bail because of the ice. The trails are in less than ideal conditions. I bring out micro spikes until, I dunno, mid May, as there may be that 50 meters of Death Ice which can kill a summit attempt.
Tuesday, January 28th, 2015 – Rest

Oh, that’s why.
Wednesday, January 28th, 2015 – Freeway x 3  + Green (Strava)
The weather was killer, and the rock was dry, so I took a spin up the 4th Class route on the Second Flatiron: Freeway, and then popped up Green, before doing two more laps on Freeway. Freeway is a super fun route – the way I start it does not feel like 4th class to me – if I didn’t know where every slight depression and hidden crystal were for footholds, it would be rated 5.easy, but we’re sort of splitting hairs I think. Felt super comfortable on the rock though – sometimes after taking a little time off the Flatirons, you need to kinda make sure you have your slab skills down. Today it was no problem.
Thursday, January 29th, 2015 – Freeway + Green (Strava)

Ditched work early, and took a quick spin up Freeway again, and up Green. Apparently, I did my fastest time today, but I question Strava on this – just slightly tired from yesterday, and I didn’t take the easy way up, which would probably make my time faster. Anyways, fun times, as I beat the sun going down, to get down the trail.

Friday, January 30th, 2015 – Free For All, Bakers Way and Green Mountain (Strava)
What started out as a warmup lap up Freeway (again!), I wandered off the line, thinking maybe I’d go do the Dodge Block Route, instead. Instead of Dodge Block, I decided to just check out Free For All – a 5.6 route David and I did with gear, a few weeks ago. Everything again seem to look pretty casual looking, so I decided just to solo it. For the most part, it was!
The Second Flatiron doesn’t get too much traffic, outside of Freeway, so it’s always somewhat of a tiny adventure going off that line. It’s a fairly funky line to be honest, but I think the variety of the terrain is part of its appeal.
Once on top of Green, I capped off the scambly nature of the outing with a little contrived boulder problem onto the summit of Green – a sit-down-start, awkward-crack, whacky-mantle little something-something:
Saturday, January 31st, 2015 – Rest
I had thought about doing a pretty long run today, but the soreness of merely jogging across the street to the bank before it closed was enough to make me think otherwise.
Sunday, February 1st, 2015 – Climbing @Movement
Sunday was Chrissy’s 30th – sigh: yes, I don’t go out with a lady in her 20’s anymore. Well, that’s OK. Our plans to go to Shelf Road to climb were sullied by the threat of snow, so we stayed in town, and just knocked out 30 pitches for her 30th, before getting dinner with family. I did significantly less than 30 pitches, as I was easing into climbing, after trying to not rehurt my fingers. Fingers felt good!
For whatever reason, I focused a lot of my climbing on really stepping up high, which seemed to significantly make things easier. I didn’t think it’s a good way to go about things, but a lot of the climbing at Shelf is super reachy, with poor feet, and sometimes the way to overcome a problem area is to wrench as hard as you can on small crimps, step up high, and get to a much better area.