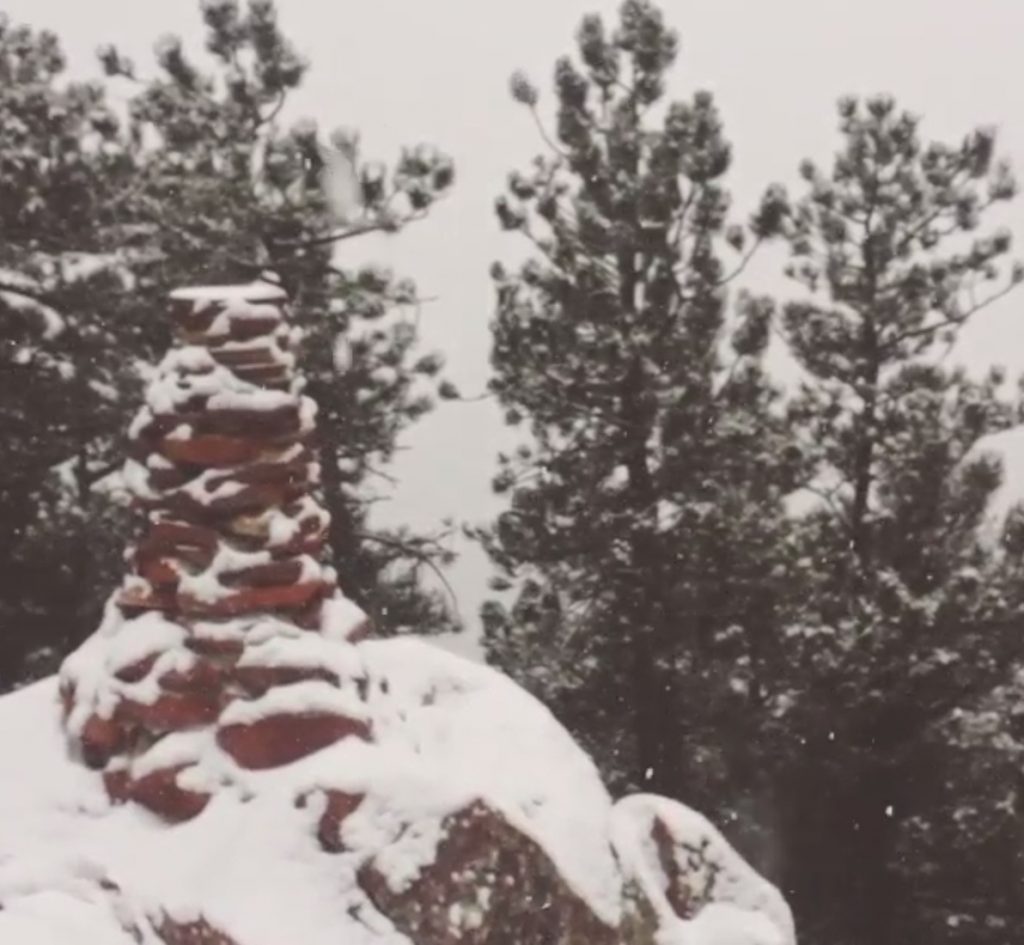 Strangely, nothing, as I had basically 2 days off from running. This was basically a workday for me.

Felt pretty good today – it’s always sort of a crapshoot after taking so much time off. Part of me wants to think I’m well-rested, another part of me thinks I’m a fat slob that’s lost all the fitness they’ve worked up. Perhaps you can relate.

Fairly icy on the trails, but I relented on putting on traction, until after crossing over Flagstaff road for the last time, on the way to the Ranger’s Cottage. That’s when I found out I had brought one brand new microspike, and one horrible broken microspike. Given that, I changed my ascent line slightly, and pondered how to get down without death lingering in the air.

Decided that the social trail down would be the least icy option, which turned out severely wrong, as everything: untrodden snow, or trench was glazed with ice. Many slips. Once I got down behind the Sunset Flatiron, it would have been pretty disastrous to take the 1st/2nd Flatiron trail down, as it’s usually Icy Death on a good day in the winter, but now it had a small layer of snow that fell, which means I couldn’t even see where the ice was! What to do.

One idea would be to descend between the 2nd and 3rd Flatirons – off trail, until hitting the descent route off the Third. The other idea (which I took) was to head north, and bushwhack until I hit the Amphitheater Trail, and take my chances on that. From there, the road isn’t too far to get to. There should be a trail somewhere between where I was, and the Amphitheater Trail, but I think OSMP has sort of decommissioned it, or something – there’s no sign telling of its existence anymore. No bother, really, as I was just going to take the path of least resistance. That also proved tricky, as big piles of what I thought was powdery snow also had that nice hard crust of ice on it. It was just many instances of my sliding down on my entire body, until I hit dirt or rocks again. Sigh. Once on Amphitheater, I was OK. I put on my good ‘spike, and made due with the rest of the trail, and then home.

Woke up early enough to summit South Boulder, which I haven’t in forever. It’s usually pretty quiet up there, which I was hoping to find. At 7:00am, the snow forecasted for today had just started to fall, which made for delightful ambience. Running to the start of Shadow Canyon is actually a run, rather than a run/hike/slog, which felt good. Hiked up Shadow, and then Sobo, then tagged Bear with only running past one other person. Delightful. A trail crew was heading up with axes and saws as I was heading down Bear. There was a forest fire on Sobo and parts of Bear a few years ago, and now a lot of those trees are starting to… topple over. Sort of scary if you think about it.

A nice portion of trail from Bear Peak to almost the summit of Green that’s runnable, with minimal breaks, and again a hike up to Green Mountain, which I had all to myself. Took the social trail down, to get home in time for things inked on the datebook. The 1st/2nd trail was icy death, as I thought the day before, and I found myself ass over teakettle a few times, hitting hard ice I just couldn’t see. I see why many runnings are all goofy on skiing these conditions but car-free dude here will just have to get really good at not breaking a leg and dealing with what’s given.

Almost 16 miles for the day, which is more than I’ve done in a day in a while. Finally felt it after this run (fatigue), which I haven’t felt in a very long time. That’s OK though, it’s just all base miles for weeks more (and weeks on top of that). It’s pretty difficult to stay at a low heart rate on some of the grades of these hills, so it’s imperfect training, but it’s also so much fun to hike up a mountain, or three.

Another spin up Green Mountain before starting the rest of my day. Ran into Jeff V, who was looking for his hat. He’s on 1,000+ ascents of Green, so looking for his hat was sort of a non-issue for him (ha!). Sadly, it hasn’t been found, yet.

I had planned to do a few more run this week, but the week ran away from me instead. So it goes. My plan to hit 50 miles in a week will need to wait until next.