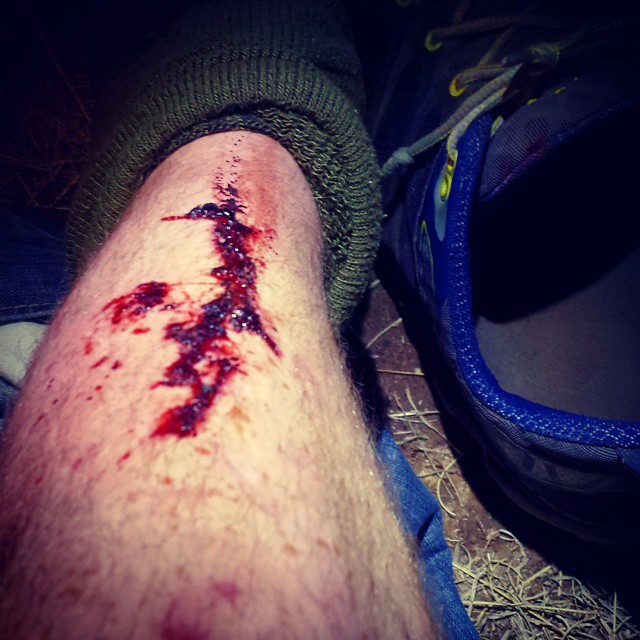 I had developed a finger injury, while trying a 5.11a on the lead wall the other week. So I couldn’t really do much bouldering this morning. Instead I rode the trainer for a bit, then did a good heap of core work. It’s literally the only time I now pick up a weight for working out (although most of my core work is still done with just my bodyweight).

The theory is, since I have wimpy arms and I don’t want to develop huge muscles, having a strong core could compensate, or at least allow myself to use my upper body as efficient as possible. As I type this, it all sounds like b.s., but I’m going to follow it, for now. What’s the worst that could happen? Nice abs?

Implemented some pullup stuff as well, and working on the campus board – except instead of using the campus… rungs? I just use these huge buckets of holds, so it’s simply hitting my back, rather than working on my grip. Fingers were mightily taped up, but I’m sure I was doing some sort of strain on them, anyways. Bad, Justin.

Tuesday, January 13th, 2015 – Green Mountain
Starting from my apartment, ran up to Flagstaff, then to Green, down the social trail. I’m completely and utterly stupefied, but there’s a trail that can link up to another trail that goes up Green Mountain that I have yet to take! Didn’t take it today, but I’ve been eyeing it, every time I get to the ranger’s cottage. Efficient, it is not, but it may be a mellow climb, and since I’m working on base, could be just the ticket in not going completely anaerobic, while ascending Green.
Wednesday, January 14th, 2015 – Green Mountain
Up + down via the social trail.
Think I ran into Tony, hikin’ up to his 1,000th life ascent of Green (as he writes). Great job, man. I remember reading blog entries from him, where he beings running in Boulder, and laments that the trails aren’t as buff as they are in Colorado Springs. Then, this sea-change happens, and the dude doesn’t see obstacles as something to avoid, but instead something to cleverly overcome – and bam! He’s running up Flatirons. Totally impressive.
Thursday, January 15th, 2015, Bear Peak, Green Mountain

Had a job interview up on South Boulder Road, so afterwards, I though it’d be a good idea to take a run from the trailhead off Leighigh to get some of that nervousness outta me.

Ran up Fern Canyon to Bear Peak, then Green Bear to Green, back down Bear Canyon, back to the trail head. A nice outing – really nice clear night. Not too chilly.

Had a somewhat miserable time at Shelf Road, as my finger injury was far from healed, and I was getting a bit too frustrated sucking at the climbs. In one instance, I threw my shoe into the bushes, realized how dumb that was, and went to retrieve it, which was an impossible task, as it’s the same color as the rock and well, everything around it.

Somehow – someway, my girlfriend does find it, but as I was climbing back up to the trail, I lost my balanced, tripped, fell and tore my shin open, wobbled some more, and landed in a cactus, squarely on my ass. That’s what losing my tempers gets me. At least I got the shoe, back.

That night’s scene was me with my pants down, and my girlfriend carefully taking out many dozens of cactus needles by head torch, in the back of a Subaru, parked by the campsites. Sigh.