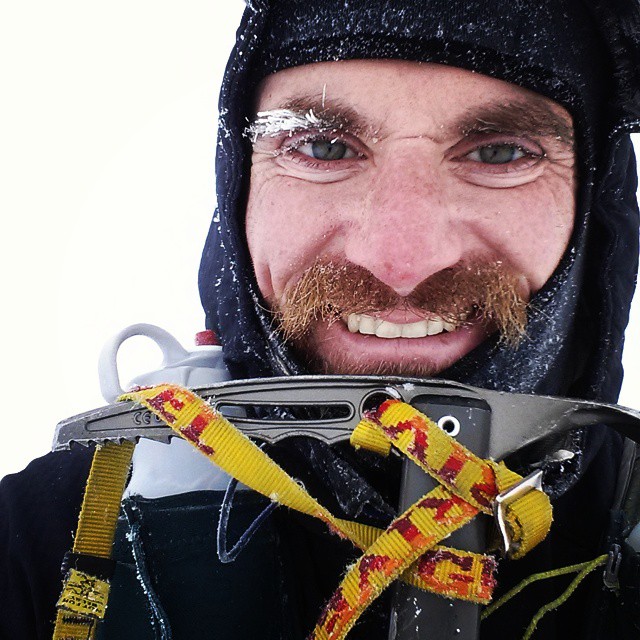 Looking a little chilled during a whiteout on Peak One
Alright.Vacation’s over.
Monday, January 5th, 2015

I spent the rest of our downtime with Chrissy, which posed a problem, since all my gear from our Mexico trip was still at her house, and my bike was not. So, I just decided to um, hike it all home.

What’s funny is Chrissy lives, like a block from the climbing gym, so again I was back in the area.

Certainly being inspired by both Jeff V. who just finished his 1,000th career summit of Green, and the impending 1,000th lifetime summit of Green for Tony, I’ve made it a goal to do 100 summits of Green this year. Like most goals, I don’t really care about the number, but it gives me something to focus on and target, and a reason to develop a discipline to get out there. The end result is hopefully good form for, um, running up mountains and stuff.

I have nothing recorded but, that doesn’t sound right. I was probably at the gym, spinning on the bike machine for an hour or so.

Snuck a small session of Bouldering in the a.m. before starting the day. Just took a survey of the entire area from L -> R, trying to do all the V1 – V3 problems in quick succession. Got shut out on a few ones – there’s a greasy sloper problem with bad feet I haven’t figured out, and a overhung V2 with a huge reach I chickened out on. Happy though, to have gotten two V3’s I hadn’t done in the past. Both were on small, crimpy holds, needing a lot of body tension and balance.

Ran into a tree branch, following tracks to the social trail going down. Damn, that hurt. The egg on my forehead was painful simply to look at.

Chrissy met me at the gym – I just rode the bike trainer thing for an hour, then belayed her. I know, easy on this whole rock and roll lifestyle you got going here.  10 years ago, I was probably pretty much toasted by 9pm, and by 2am, I had a $100 bar tab.

Chrissy and I were being slightly indecisive after getting up relatively early to beat the rush. We decided to flail a bit on the vastly overhung lead wall. We both failed to top a 5.11a at the same point – just really bad feet (as if that’s an excuse). We tried another 5.11a on the same wall, but I didn’t get too far. Fell before the first bolt, then fell again after the first bolt, which is pretty embarrassing. I swung right into Chrissy, who was pulled upwards from my fall, and I just remember seeing her face come at me with great speed. Something sorta didn’t seem right, as I didn’t here that empty “thud” of forehead hitting forehead – Chrissy had stuck out her hand to smack my face, rather than her head. Had a good laugh on that one. I tweaked my hand somehow on that fall, so we called it.

I rode up with Chrissy to Summit County yesterday. She met up with some friends to ride at Copper and since I don’t have such fancy toys, I took the amazon Summit Stage Bus back to Frisco and trudged up Peak One.

I actually love this summit – it was one of the first summits I’ve ever… summited in Colorado – when back in 199mumble-something. My last attempt two years ago in May ended near Mt. Victoria, as the weather was moving in. I had gotten a late start because the motel I was staying in had a hot tub, and I was wrecked from the ride up.

This outing, I was hoping to at least get to the next bump in the ridge (Tenmile Peak), but the visibility on Peak One was 0, so back down I went. My tracks were easy enough to find going down, but I just needed to investigate some alternative tracks, that looked pretty fresh, and before I knew it, I’d lost the trail in the trees. Lots of playing in powder stashes, and a little traverse over J Chute got me… basically to the right place to be. I did this exact same snafu the first time I climbed this thing in Winter.

Felt pretty solid – tons of energy after the outing.