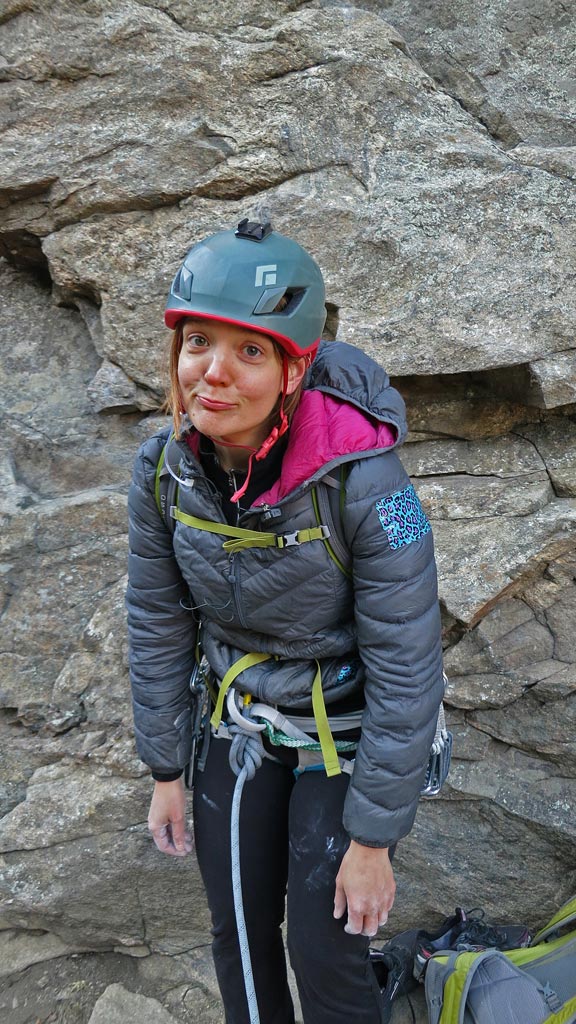 She may look benign, but this lady can kick your ass on a climb.

A nice night run in the mountains, under a mostly-full moon. Felt pretty sluggish, but I’m just out there for some fun and some meditation. My running is going to get quite interrupted come Mexico, so it doesn’t matter too much. I’ll be doing base training for months on end, anyways.

I was trying to consciously hold back going up Flagstaff, trying not to get close to redlining – it’s easy to do when the ascent gets steep. I’ve started reading 1:59, by Phil Maffetone – it’s mostly about how he thinks the Marathon time will go under 2 hours sooner, rather than later. Although I have no real interest in running a road marathon – let alone winning one, he makes some pretty interesting observations. One that’s struck me was the idea that 99% of marathon running is aerobic – so why do people to so much time to train for marathons anaerobically, example: repeats on track? One of the ideas he stresses is running much lower than your aerobic threshold (simplifying things…) in order to gain a better Aerobic Efficiency.

This isn’t crazy talk – the idea of periodization follows this same formula of lots of base miles to begin with, and throwing in speed work more at the end of the period of training, before a taper (then, the race). It’s slightly counterintuitive, since you would think that to become fast, you need to train fast most of the time, but that’s not it at all. If you can’t run a moderate pace efficiently, you’re not going to be able to run a fast pace for very long – you’re energy stores in your muscles will run out; your legs will tire. The trick is understanding is that your moderate pace will be pretty darn fast, if you just work on making it as efficient – we’re talking 5:00/miles for a semi-elite racer.

This should be completely obvious to me, as riding a bike all day and night is nothing but practice in aerobic efficiency. It’s very easy to understand that if you try to gun it for a few hours, you’re going to bonk, and then you’ll be dragging, until you just can’t go any farther. But, if you pedal, almost slower than you think can be maintained easily, you’ll last all day. The problem may be that running in general just takes more energy to do – there’s more parts of your body engaged, and thus, you need to adjust how you anticipate how you tire out.

I do anticipate using quite a bit of riding this winter and spring to complement my running – it was going to happen anyways – but now I can think of it as working on my base, and doing it without so much pounding on my legs. As much as I’d like to do 100+ miles, I just don’t have that ability (or I do – or did, for three weeks in July, and it took 2+ months to recover!)

Coming back to my outing, the ascent to Green was most definitely almost all hiking (to digress again, how do you fit so much ascending into base work? Just hike everything?). A little spooked on the social trail between the First and the Second, at night. Mountain Lions! It’s still the best way up the mountain.

But, the Moon! So bright, I could see snow on Longs Peak reflecting back to me, on the top of Green Mountain, as I could for all the peaks on the Continental Divide. Enchanting. Didn’t pass a single person up there. I always wonder though, who may have the same light-night schedule as me?

Although (I think?) our goal was 25 pitches, we got about 18 in, which sounds like such a letdown but – whoa! 18 pitches! Again! Five of those were in a span on about 7 minutes, as I climbed up the same 5.10a route four times, then leaped around a 5.7 route once. Yeah, felt good.

Before that, I finally figured out a specific 5.10d route. I want to say it was graded a letter or so lower, then changed. I’ve honestly never seen someone complete it yet, so I started the route without much sense that I would complete it either. My first attempt this evening had me falling in the same place I always fall, but I thought I’d go for it again, and surprisingly, I had much better luck. The climbing eased off considerably after the bouldery crux. I lowered, rested, and tried again, completing the route, without falling.

Happy about completing a moderate route on top rope indoors you’ve tried for weeks? Acknowledge and celebrate the little victories, as well as the large ones.

Sun up to sun down filming in various locations for a project I’ll announce later.

Rode my usual stair step route from Boulder to Denver. Band Practice and all. Felt positively horrible after the ride – hands on head, and head on table. For basically hours.

Chrissy and I literally blew off work to climb Playin’ Hooky in Clear Creek Canyon. I woke up feeling much less than ideal, but decided it would pretty much suck if I backed out of the climb, while Chrissy actually took work off to do it.

By the top of pitch one, I was indeed about to pass out, puke, crumple up into a ball, or all three. It wasn’t that I was feeling some ill effects from vertigo, I just felt unreasonably bad. Rather than ruin a good day for Chrissy, I soldiered on to the few pitches, and we were able to top out, without a mini epic on a sport route.

Our real agenda was to get comfortable climbing multi-pitch routes together, and I sort of feel I still wasn’t on par with Chrissy, especially with the speed needed to do something really long, which isn’t becoming of me. We may have a chance to get out once more before our trip, but the snow is going to start falling any minute now, outside.

I guess, you can only be as prepared as you can be. 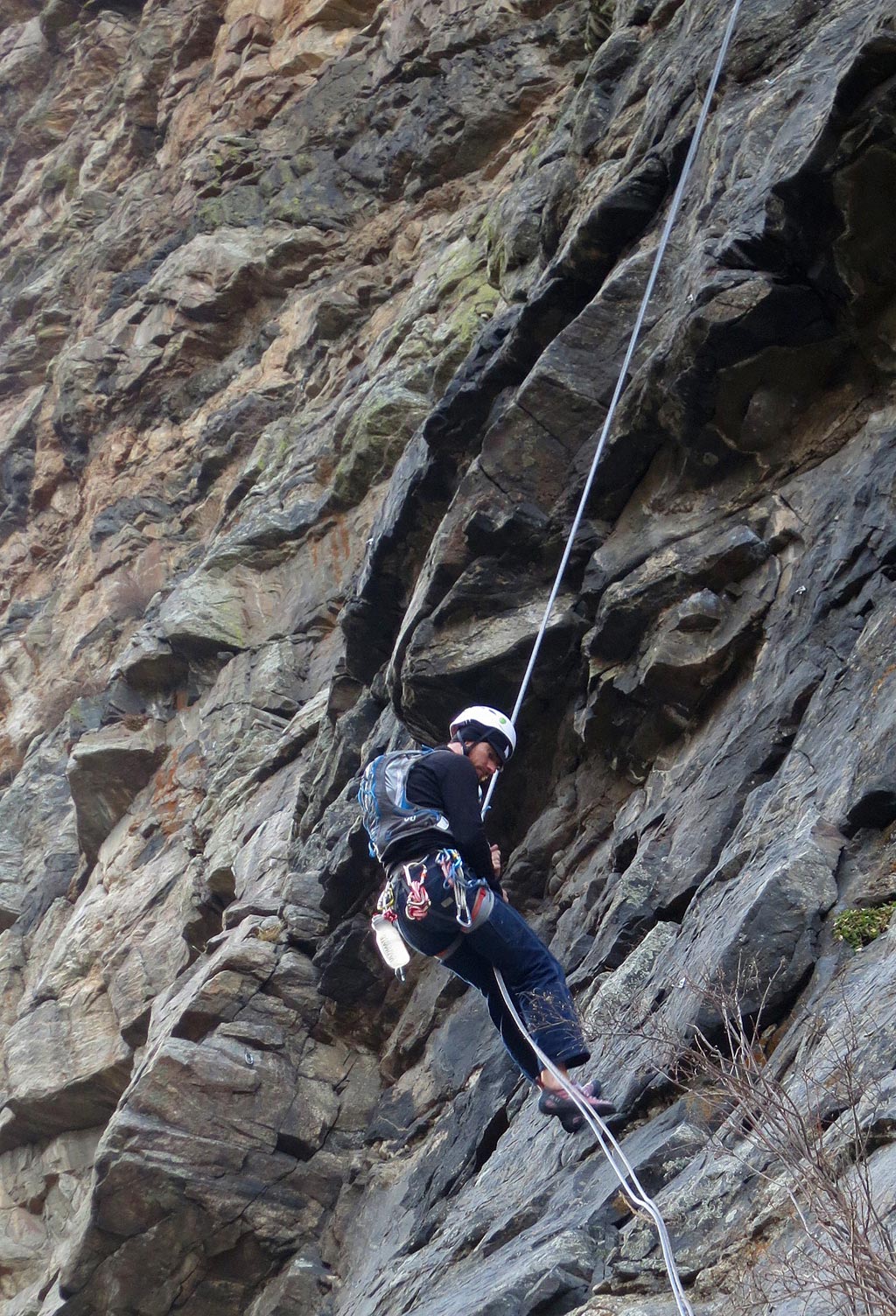 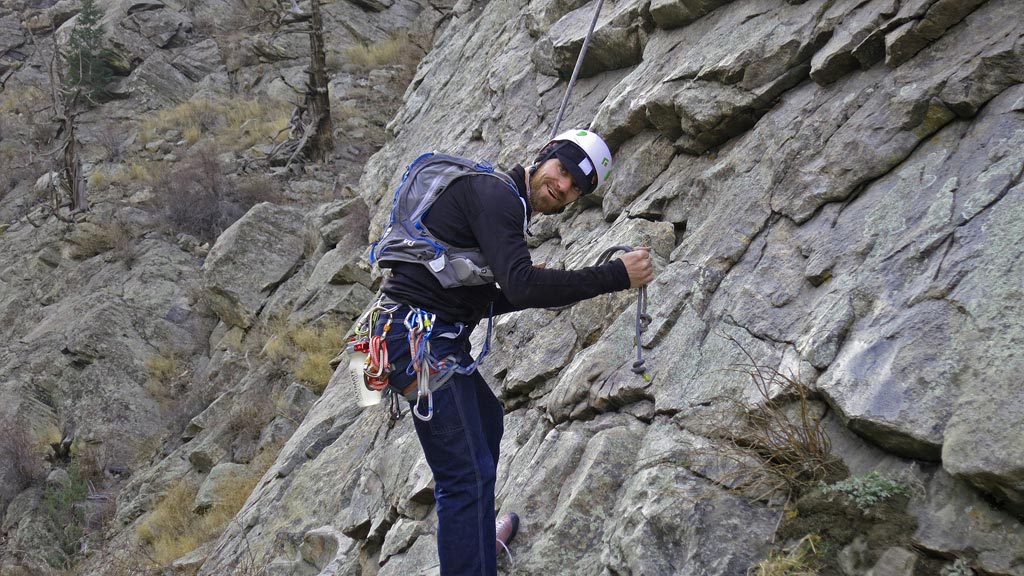 We beat most of the crowds, by getting up far too early for a Sunday and managed about 18 routes climbed before noon. That seems pretty good. We were climbing a little harder than usual. I was able to finish off a 5.10d twice on lead, without falling which was pretty nice – not sure if I’ve managed that before.

Almost managed a 5.11a on lead, which would have been new territory for me, but I fumbled up the last easy hand sequence
. Might have been nerves, or I just got mentally tired. We also played around on a ~5.12a on top rope. I fell every which way, but made slow progress up, unlocking the sequences. We could have worked it to the top, but our goals today were not really about that – we’re going for volume. Thankfully, the route is new – it’ll be there for weeks. It did remind me of how I used to climb when I was 16 – just fumbling up things I had no business being up. Ah, memories.

Chrissy did about 3 more pitches (up, down, up) than I did. I called it quits, as I was just failing at the last few routes I did and it didn’t seem like going on would be of much benefit. Volume and endurance are great, and I want both for the project, but gaining them isn’t done by pushing yourself over your limits every time you train. Chrissy is a stronger climber than me, and it really shows once we start testing our limitations. Plus, I needed the utility of my hands later in the day to work.