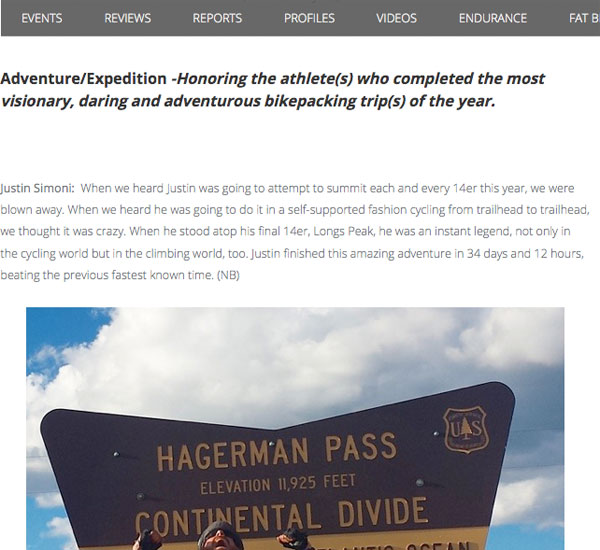 Thanks to Bikepackers Magazine for mentioning my Tour 14er super ride in their 2014 Year in Review! My thoughts usually span quite the spectrum. I remembering it wasn’t really all that long ago that I bought my first thrift store beater bike for < $15, and it didn’t take too long after that for me to wonder if I could ride it from Denver, to Boulder (A whole 30 miles). After the intense pain in my legs diminished (as well as that large pizza was consumed, after landing back in Denver), I certainly was hooked.

It’s easy to fall in the mindset of, “Well, what’s next – what’s going to be even bigger?!”, which isn’t really the best way to go about these things. Instead, you should probably ask yourself, “What would be the most fulfilling thing I could do?” That may mean testing one’s limits, but it could also mean just helping out someone else with mentoring, or just sharing yourself, so other’s have a head start on their own (mis)adventures. I’m also critical over route selection and goal – it’s gotta aesthetically be pleasing, the same way a drawing or painting is. Something that isn’t easy to put into words – that’s why you try to do those impossible things.

If I looked at my time doing these endurance things, I usually fall into a pattern, where one year may be a huge trip; the next year is a series of smaller ones – and that may hold true this time as well. Those years of smaller projects is really a time when I’m working on weaknesses, rebuilding myself towards another goal that just may be too big. Either that, or paying off the credit card bill.