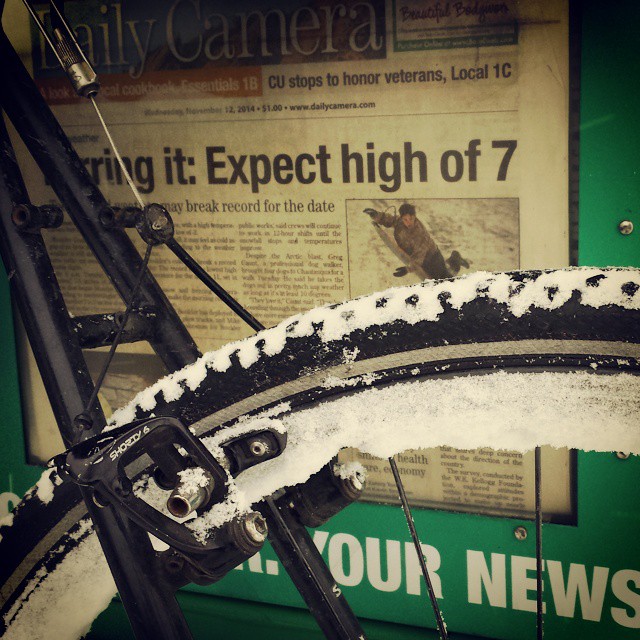 Having just landed in Boulder, after ~ two weeks of traveling with a top-secret art/performance project, I was pretty much in a wreck, surviving the day mostly on loads of coffee. I dropped off my climbing shoes to get resoled at Rock and Resole, and headed for the gym, climbing in a pair of relatively floppy rental shoes. My partner for the above currently has a shoulder injury, so bouldering was all I was up to. Nothing really incredible to report, except I was happy I had brought my rock shoes with me traveling, as I was able to sneak in a few sessions at gyms in California, instead of having a prolonged break from climbing.

On Monday, I was in Tuscon, AZ, and the temperature outside at around lunchtime was in the low 80’s. Upon arrival in Boulder, it was more like 10 degrees F, if I want to be jealous. And snow! Snow everywhere. A bit of a surprise, and not one I was really looking forward to. I had plans to do a lot of climbing outside, but as it current stands, that’s not much of an option in my immediate surroundings. Damn!

Brr. My new digs are on West Pearl Street, a few blocks from trailheads to Red Rocks and Flagstaff Mountain, and it’s been quite the treat to just leave the house, and run to trails that are seriously, seriously local. The trail system south towards Green Mountain first goes much of the way up Flagstaff, before a junction will take you back down Flagstaff Road, and the start of a few routes up Green Mountain. I usually use this as a nice warmup for Green Mountain. Then, on my return trip home, I’ll take an alternative route up Flagstaff, and then retrace my route back home.

Left the house around 5:30pm, so this entire run was done at night, with freezing temps.

Manage to do a number on my legs – it probably didn’t help that I’ve been doing serious time sitting in a cramped shortbus for untold amounts of time, with some of my favorite people. A twinge in my right shin, an annoyed left foot and a coupla falls found me sorta limping/fast hiking home. The snow is somewhat deep, but unconsolidated – the worst of my falls caught me off guard, as I just allowed myself to fall, thinking things wouldn’t be too bad. Wrong. I dinged what I thought was right below my kneecap right on a hidden rock. Ouch. Once done with my run, I realized I actually hit my vastus medialus which I was sort of happy about. It hurt like all get-out, but it a big piece of meat on my leg, rather than hitting bone or tendon. 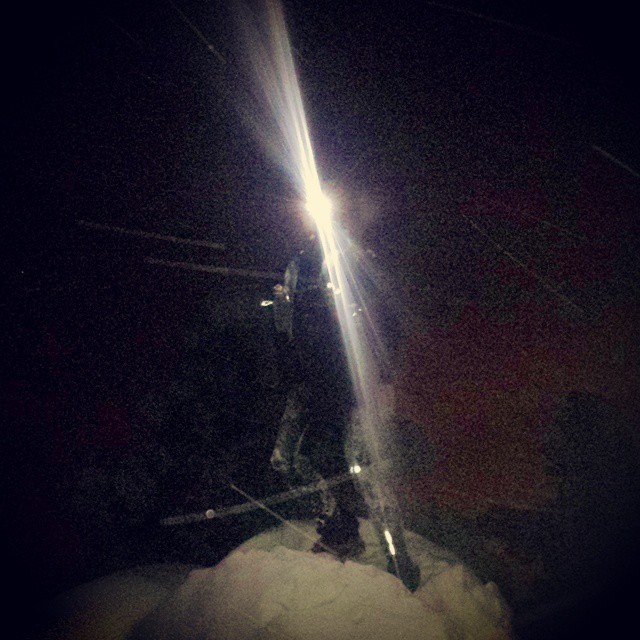 Another snowy, extremely cold day, so back to the gym. First time climbing on rope (rather than bouldering) in quite a while, so the forearms were feeling it. Felt quite strong the entire night, though.

My lady wanted to summit Green with me, so we did just that, leaving even later than I did on Wednesday. She’s first and foremost a climber (and a stronger – much stronger one than I), so this necessitated keeping my pace a big slower. I loaded my pack with around two gallons of water and made a hike out of it, the weight helping me not to completely drop her, which girlfriends are somewhat sensitive about. Much warmer than on Wednesday – around freezing. Leg bruise was a lot better, but def. stiff, so it was nice to taek it easy . 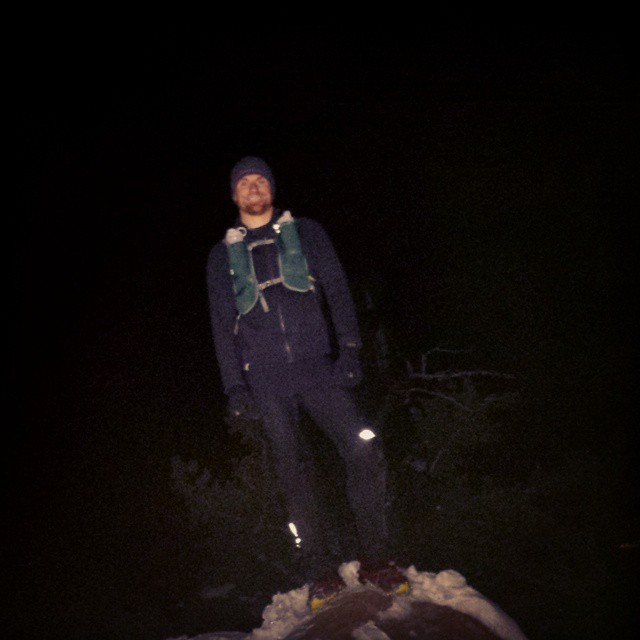 Let it snow, let it snow. Another wintery day, and we were at the gym, with it seems, half of Boulder’s climbing community at 9:00am. pretty worked from Thursday to be honest, so it was somewhat of a light session. Still did some routes and Boulder problems I hadn’t done before, including a few onsights, which is nice.

Somewhat I was able to sleep to around 3:30pm, only waking to get a late breakfast I mostly seemed to be brain dead for. It had been a long week, with all the traveling.

Next week will see more climbing, beginning on Tuesday and running when I can fit it in (much like this week). We have a trip to Shelf Road to climb on Thanksgiving week, which I may ride back from (or not, we’ll see how it all pans out), and then the rest of the week I’ll be housesitting in Arvada, which will probably see me running roads and checking out the Denver Bouldering Club, or that new gym in Golden.