A pretty fantastic week in my life, I must say.

My goal was just to run a pretty good time up Green, via Gregory. “Pretty Good Time” maybe just meant beating my own PR, but that seems to be set pretty low, as I don’t hit up this route all that much. Happy to accomplish that, and then I controlled-fell down the same route at a pace likened to a rabid antelope scared of heights. Or something like that.

Afterwards, I did Freeway, the West Face of the Second, and power-hiked up Green. A beautiful day.

Similar to Monday’s little challenge, it was time to better my PR up Fern Canyon to Bear, as it’s been awhile since I had used it as a test piece. Managed to whack off 5:30 off my time, which is… I dunno, amazing. My power-hiking-while-heavily-breathing skillz have little equal.

After hitting up Bear, I tagged Sobo, and went back to Bear, to try to control-fall down (like I do), back to the NCAR trail head. Perhaps, I thought, I could better may time on that, too? When I had last ran this route, I thought I pulled something out of thin air with my speed, so I was nervous, strangely, to see if I could even get close to my time of 50:09. It had been a year, so I guess anything was possible, but I was feeling the effort going up, as well as Monday. Felt, very, very slow on all the easy stuff, and very uncoordinated on all the technical stuff. Managed to fall down twice, skinning my knees and had to stop twice to retie my shoe.

I still hadn’t met up with the Mesa trail after my second fall, which had me slightly limping a bit, before the adrenaline starting covering the pain. Glancing at my watch, I was only a half hour into the run back down, giving my a whole twenty minute to reach the trail head to match my last time. Surprisingly, I did it in 10 minutes flat.

Later that day, we climbed the First Flatiron! via the Direct East Face Route, using ropes and pro and all that. Well, until it get dark and we decided to finish up everything just free soloing it all, rapping down the back. Terribly rewarding, to finally tick that route off. Felt 100% solid on this easy route.

After leaving at the rise-and-shine time of 12:30 in the a.m., I made my way to the Longs Peak TH, under pretty stiff winds. I wasn’t giving this attempt much of a chance, and made plans to just turn South at the HW72/HW7 junction and ride somewhere else for then rest of the day, but things seem to quiet enough down once up (and exposed), so I thought: why not.

Turned out to be a pretty perfect day – windy, for sure, but nothing that wanted to stop me in my tracks. Took a few cat naps, as I barely got 3 hours of sleep the night, “before”, but made it up and down, without too much bother, just didn’t eat enough throughout the day. Happy to feel as if I had the mountain to myself, as I saw no one until I got back to the trail head, but I think there were a few people milling about (it’s a big place!)

The ride back home wasn’t super fun, as my energy levels were about 0. I couldn’t even start down, without a 15 minute nap, and about 5 cookies mashed into my mouth. Life is good. That makes two sub 24 hour Longs Peak Duathlons for me, for the year. The hardest part of this is hitting the weather window. I made plans to do this only a day or two before heading out, checking the weather on multiple sites, every day. Exhausting!

Given that my feet are now extremely swollen, no doubt to the exertion (or eating too much bacon, dehydration, some unknown illness, forthcoming alien invasion), I foresee the next week being pretty mellow, as I’ve certainly peaked, or, or something, I have no idea. I’m looking at trail running races in the next few weeks and feeling competitive. This will lead to nothing good. 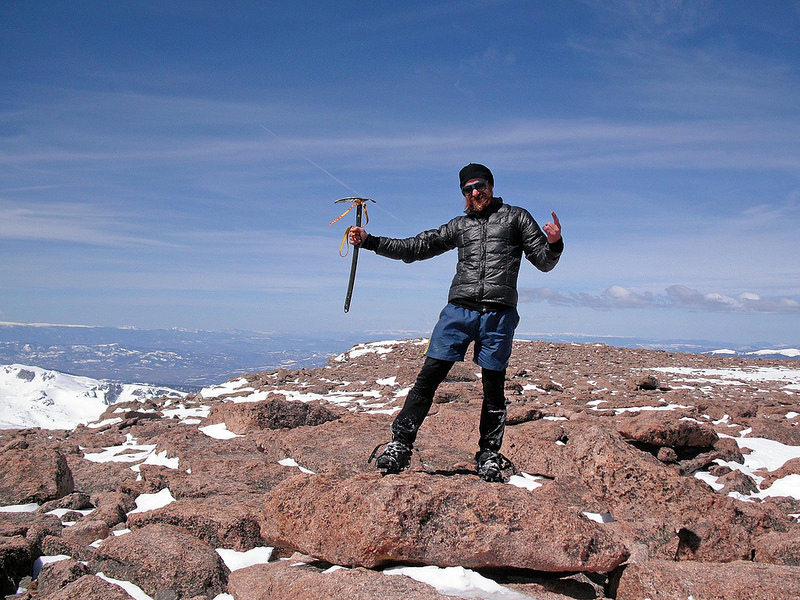