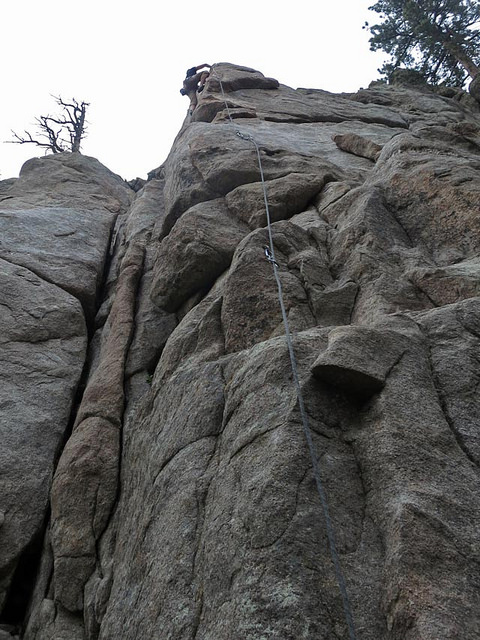 Lots of band practices this week, so not much on the feet, except a lot of climbing! including a small stint in Boulder Canyon to “lead” some 5.9 sport routes. Nice!

My goal was really to put in a good time on the Shadow Canyon segment, which I did! @ 23.58, the current CR for that segment. Only a minute + change faster than last weekend w/the Rocky Mountain Runners, but I felt I put in more than 20% more effort to go just that little bit faster. Most likely, I could play it smarter, and just go all out for the last 250 feet and get a better time, rather than redlining the whole segment. Running is really weird. Tagged Bear, by scrambling to the top of the first junction w/the West Ridge trail, cause I can do that sort of stuff. Rocketed down w/abandon.

On my quest to find the most circuitous route from Boulder <-> Denver, I came up with this number:

Start in Boulder, and up Flagstaff, onto Coal Creek and continue down a bit and then up Gap Road, which takes you to Golden Gate Canyon SP. Hit some dirt for a while, until you’re on 119, and go through the gamblin’ towns, to Virginia Canyon, and then down more dirt on Oh My God Road to Idaho Springs. Stop for coffee (of course) and then head up to Echo Lake via the Mt. Evans Highway, and then scoot on over Squaw Pass to Everygreen and down into Morrison. Get through suburbia via bike paths and make it to band practice. Total: around 125 miles, 13,500+ feet of elevation. Not bad for a day’s work.

Battery on the GPS died (looks like about halfway), but did the Freeway route on the 2nd 4x, as well as the quick, 30 foot 5.easy pitch up to the summit of the 2nd, via the West Face. Total sh*t show, with the throngs of hikers, most being fairly courteous – just SO MANY. I was finding whole families on the social climbing approach trails, completely lost.

Surprisingly a lot of climbing today – a hard night at the gym (sloppy 5.11d), closing it down after 3.5+ hours of climbing, as well as climbing outdoors in Boulder Canyon (5.9+ lead!), as well as scrambling outside for thousands of feet.

Surprisingly lot of total elevation gain (total ~ 22,000 feet), despite so few days on foot/bike. A nice century+ bike ride, with a ridiculous amount of climbing and a little dirt. I don’t think I can complain about this week – so much done in such a little bit of time!