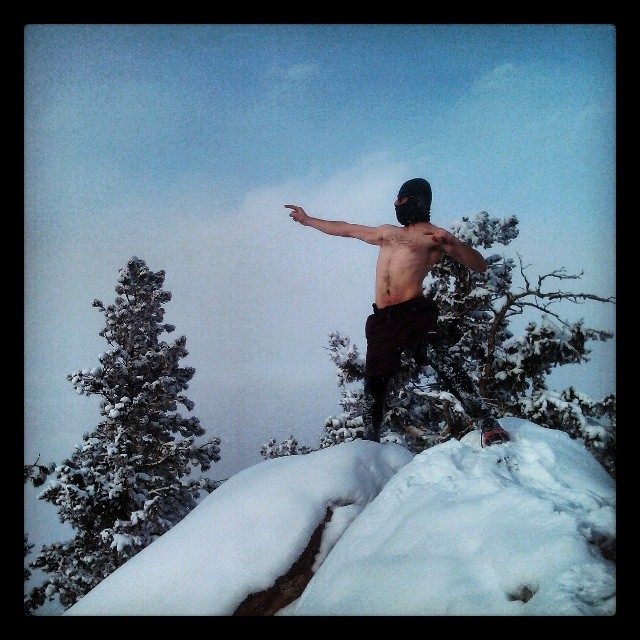 Another week of searching for elevation gain, as the cold weather descended on the Front Range. The Boulder O.S.M.Ps were relatively vacated of any casual activity, as most people used common sense to realize that ascended even the modest peaks around town in temperatures well below freezing was not in their best interests. Of course, I am not most people.

Figuring out a usable clothing system to do my slow running/fast hiking/quick stumbling really wasn’t the issue: I have an amazing selection of wool garments from Icebreaker that seems to do me well. Running produces a ton of heat – and I produce a ton of heat just well being, so I’ve gone out with merely a wool under layer, a UL puffy vest and a freakin’ raincoat and have been fine.

Stopping while running has proved to be hilarious, as everything  instantly freezes up. My coat would sometimes just stay frozen, the bottom of which would become very rigid and that proceeded to dig into my hip and stomach, causing small scratches and cuts. Putting back anything on – say: a glove I’ve taken off, would remind me just how cold things really are. There’s not much comfort in placing something that’s frozen back on your body, in attempt to unfreeze it, and then have that soggy thing keep you warm. Best to just keep on keeping on.

My biggest problems although were après la course: I don’t own a car, so I cycle from my house, to the park, and back. Once I’m done with a run, my clothes are wet from romping in the ice/snow/slush for hours on end, and I am sweaty. If I don’t plan ahead for the ride back, that all freezes up again – especially since the road from the park to my house is downhill and wet and I don’t have fenders. I’ve had to resort to basically bringing an entire change of clothes worthy of a mountaineering outing and changing in the bathroom. The hot air hand dryer blower thing has been akin to a minor god to me. Many a time has it warmed my frigid hands and dried out important items such as hats and gloves, as I offer it small bows and hand gestures similar to praying.

No cycling really to speak of again this week: what’s sort of the point?, when the temp. is this cold, and the roads are this crappy? There’s nothing much funner than playing in the snow (and chasing your best up mountains) so that’s what I was up to this week.

I’ve had the idea of doing a variation of the Boulder Skyline Traverse for a while. I’ve never  done some of the mountain peaks usually included: Flagstaff I’ve done only since last week, and Sanitas: not at all. Since I’m not car’ing it and I’m a total loser/loner, it also means I’ll be doing it as a loop, which means even more mileage. Anyways, testing out the route. Really, really cold today. Really.

I probably had more planned today, but going was slow with all the snow, and I had a late start, working in the morning/afternoon. Decided to rest up for a day (or as it happens: two) and go for a, “really really long run – no foolin'” on Friday or Saturday.

Rested up and got ‘er done on Saturday – not so bad! The only thing I really wimped out on is taking Fern Canyon to Bear Peak/Sobo, rather than Shadow Canyon, as it saved a few miles, and I’m not the biggest fan of running, if that makes sense. Still came out at 24 miles, which is a lot of ground to cover, and kind of an amazing route, as 99% is on trail.

I stopped “running” for all intents and purposes after Flagstaff – it was mostly power (or not so much) hiking from then on. The summit of Anemone seemed somewhat elusive, as it’s not really a summit at all! The ridgeline extends much farther NW (and away from the city of Boulder’s sight) and the, “summit” is, (I think?) to the E of where I kept wandering off. Sanitas was sort of unreal and worth doing a few more times. Once things dry out, I’ll be quite literally hanging out, as there’s bouldering opportunities all over the damn trail, from scrambling to, “I”ll never be able to do that!”. Always pleasantly surprised to see what incredible things are right under my  nose. There’s never going to be enough time to find it all.

Looking at my times, I started out pretty damn fast, given the conditions (snow!) of everything and then I just, you know, died. Which is fine. As mileage goes, 24 miles isn’t so much of a big deal. As elevation gain goes, 8,700 feet is a monster day.  As you see, it took most of my day. As things dry out and the trail gets faster (and I’m not like, post-holing for miles), I expect my times to get way better. I doubt I’ll ever be really all that fast of a runner – if I wanted to be, I’d, you know: run more and find more runnable routes, but that’s so not fun. I’m very happy at the elevation I can swallow up in one go.

So, the long day in the Boulder O.S.M.P was a go, and successful. For being a carless jerk, I’m expecting to be shut down from anything that’s not right outside my door for a while – which is fine for me: I’ve got plenty of amazing things to do right here and a lot of work to do, to save up for the impending summer.

Got some good climbing in this week, too: my first 5.11 top rope, indoor, sports climb route finished in the last 16 years, with only a couple of a bobbles. Woo hoo. Of course, I pick the route that’s just filled with slopers. Sigh.

Don’t know what to expect from this week: maybe just try to hit as much elevation gain as possible, in silly-stupid ways, and await further opportunities to get into the high country.

I’m also fleshing out my “race” schedule for this summer. Expect Big Plans for late July – Rest of the Summer, but spring looks like this:

When considering these times, take into account that I rode 100+ miles to get to the start of the Anti Epic the night before, on a single speed (then rode back to Denver right after the race!) and over 250 miles in a few days for the Dirty Double from Denver to Salida (via Loveland Pass/Hoosier Pass), hauling a trailer full of mountaineering gear. I’d love to know what I’m capable of in these races with fresh legs, but it’s probably not going to happen this year: I’ll be riding to most of the races again. I expect the races to be more stacked, as “gravel” racing gains in popularity and hacks like me get pushed to obscurity.

No idea how I’m getting to Durango – even for me, that’s quite a haul: around 400 miles one-way, probably more to do it in any sort of fun way (“fun” dependent on what passes are open),  but it’s near my birthday, so I may be hanging out a bit and “celebrating” it with an extended leave of absence: I believe the Chicago Basin is calling my name. We’ll see how accessible it is in the middle of April to mountaineering – no way am I paying for the train! So it’d be a long hike/ski in from Purgatory. Maybe the plan would be to fast-tour it, and send some gear to Durango, rest a day or two (work off the laptop?), race the race, drink some beers, and hike into the Chicago Basin, climb some mountains, hike out, and then figure out a way to get home. Who doesn’t love a challenge?!

The Mount Evans Hill Ascent is a road foot race, and would be my first road race ever. I’m planning to simply survive and no idea what sort of pace I can hold – 9:00 minute miles? I don’t do speed work, or any work on the road, so my only saving grace is that the 4,000-odd elevation gain from 10,000 to 14,000 feet will be barely noticeable to me, and since my anaerobic capacity should be incredible, I shouldn’t have too much trouble in pissing off some much fitter people, at least for a few miles. Maybe I’ll do it in a costume – Italian Alpini anyone?

I’ll most likely make it yet another excuse to hang out in the area for the week before, hike around, get in trouble, boulder about and see how fun it is to camp at the summit with a questionable amount of beat up gear. Come race day, I’ll probably wake up from sleeping on the summit, ride my bike down to Echo Lake, line up for the start, race the race going much-too-fast much-too-early, make it on my coattails, grab my summit bag, put on some clothes/eat some food, and traverse to Bierstadt via the Sawtooth (and then back!) and run back down to Echo Lake via the Chicago Lakes trail to the lodge, where I’ll eat all the food catered for the racers and figure out somewhere the collapse for the day. Sounds like heaven.

Anyways, to make all that “realistic”, I got some hills to walk,