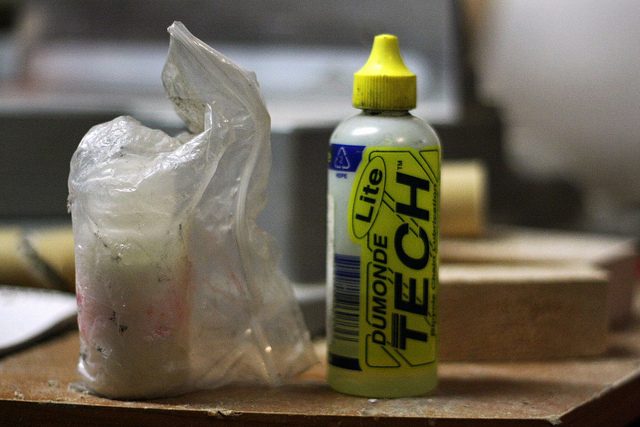 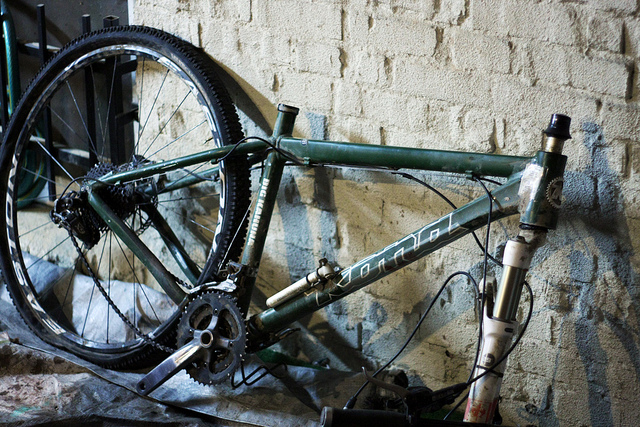 I certainly don’t like living a life that contains much nostalgia. I’m far more interested in the here and now, or the coming soon, than what’s past. I don’t hold onto many things material. So, it’s always a surprise to me, when nostalgia hits me in the face and I feel an intense emotional response. This happened to me last week, where my friend called me to tell me I really really needed to pick up these boxed-up bikes from his warehouse space, the sooner, the better.

Inside one of these boxes, was my Tour Divide rig, hardly touched since it was packed up and boxed at Gila Bike and Hike, last July. When I landed back home, I was injured and really broke, and it really wasn’t very realistic to take the time to build it up and ride this bike. It has honestly taken this long – almost 10 months to gain the mobility of my shoulder and have enough financial padding to even think of putting the bike back together.

I currently ride a fixed gear bike because I love to and I’m totally amazed I can, like – ride a 200 mile route in the mountains, or up a 14er, but I also ride it because the virtues of the bike: a minimal requirement of time/money for upkeep, fits within my non-budget, budget. Tuning up a fixed gear bike means… what does it mean?  Probably replacing a tire that has a sidewall that’s about to blow, after – you know, a week, or a month, or a few months of ignoring the problem.

Fixing up a Front Suspension, 30 speed, hydraulic disc brake, tubless-equipped mountain bike?  That’s been through a hell-year on the Great Divide Mountain Bike Route? I’ll level with you: it’s a tad more. That’s sort of the great rub of incredible bikes: some of the components last forever – the frame for example, I don’t think can be broken, except in a lab test setting, but the chain? Or the brake pads? a few dirty, muddy rides and they’re toast. That’s just reality.

So, my plan was to build up the bike enough to basically ghost ride it/push it to the shop, yell out, “FIX MY BIKE!“, and get some of the friendly faces at Salvagetti to figure out a plan on how to rebuild the bike to fit my, ahem, riding style. Unpacking the bike, though took far longer than it should have, since each piece held these memories and emotions from the route. The dust on everything was dust from the route, but exactly where will always be unknown. It’s kind of amazing. Anyways, photos: 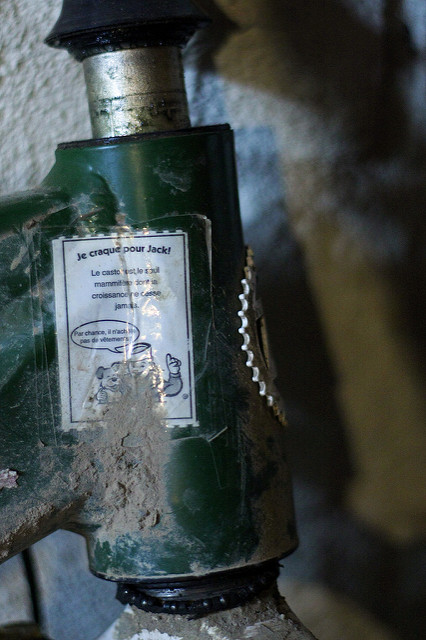 Cracker Jack cartoon! In French! I bought some Cracker Jacks in Banff, Alberta and my, “prize” was this cheesy joke. I do like that they’ve made a French-specific pun, “Je craque pour Jack!” – craquer is the French verb for, “to crack” – like cracking a joke, or something. The rest of the cartoon is about beavers, and not needing to buy clothes. (complete silence in the room)

I remember afixing this dumb joke on my bike – the reason why is completely lost, using packing tape, in Whitefish, MT. I bit off some tape from the roll and managed to swallow a big chunk of it. I tried for a while to unswallow the tape, but it… held tight. I thought, “Great, just swallowed tape. That’s certainly a good thing…” I was actually pretty worried. 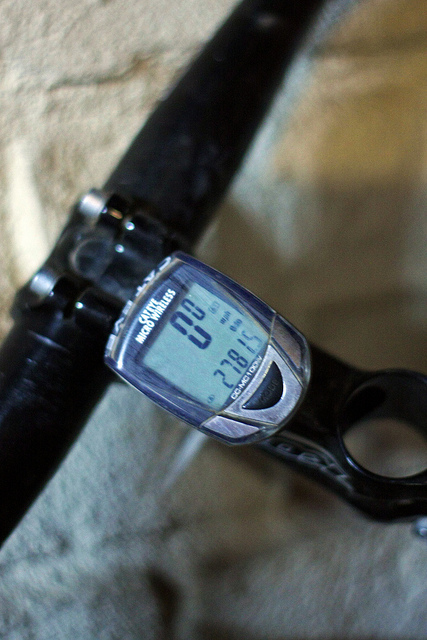 Speedo at 2,781.5 miles. Seems about right. Something like this is evidence that what you did, was actually what you did.

Small bottle of Stan’s and a small bottle of Dumonde TECH Lite chain lube. The magical Stan’s sealant was the secret ingredient that keeps my tires inflated, without needing an inner tube. Like most sorcery, it’s hard to believe it actually works. I brought alone a few ounces to use if I did indeed get a flat and needed a refill in the tire with more sealant. Never did – although I changed one tire out with an inner tube. Shrouded in mystery.

TECH Lite is the chain lube of choice on the TD. Supposedly, it creates a plastic-like coating on your chain, keeping other nasties away. Apply liberally, often, and wipe that chain down. For me? I ended the ride on the third or fourth chain, since the start. Route just destroyed chains, no lube could help. \ 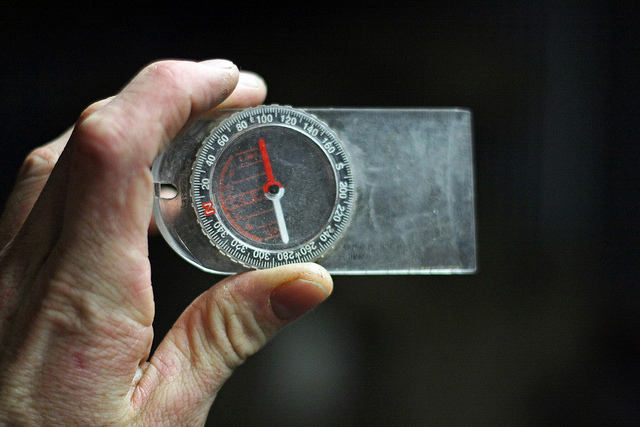 Compass. When you absolutely, positively, do not know where you are, or where you’re going. Easy, with the onset of fatigue. 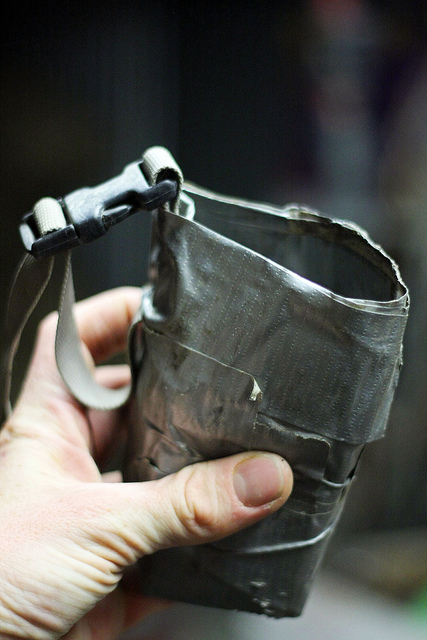 I can take just so many nay-sayers, before I cave in and purchase, say, bear spray. Once I purchased it… where does it go? With a little duct tape and an extra strap, I made this holster for my handlebars. Also worked well to place cold beverages. 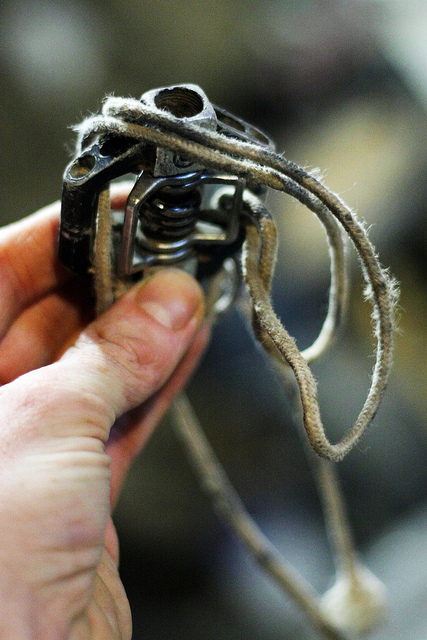 Around Salida, my pedals were somewhat sticky – the right one in particular. They just didn’t want to turn. Somewhere between Cuba, NM and Grants, NM – the damn thing just gave up the ghost and the platform of the pedal fell right off the spindle. I have really bad luck with Crank Bros. cranks, but also love how their design makes clicking in and out so easy. There’s no bike shop in Grants, but I raided the Walmart and found a lame pair of pedals to replace mine. Rode a full day on this broken pedal, by simply applying slight pressure with my right foot inwards, to keep the pedal in place. The next day, I attempted to replace the pedal, but it seemed to be stuck to the crank. Enough so, that I broke my hex wrench when applying too much torque while attempting to loosen it.

Close to the Beaverhead Work Center, many, many miles farther down the track, I did get a flat, much to my chagrin, as I was tired, thirsty and wavering near sun stroke. I wanted – almost needed to get to the work center. Just miserable. The last thing I really wanted to deal with was a flat. But I got off the bike, and found a piece of cord on the ground. It seemed a bright idea to tie my pedal to my shoe, so all I needed to do was slide the pedal in and out of the spindle itself. But it worked. I made it to the work center, with its almost mythical soda machine and clomped around with my new-found club-like foot, getting hydrated. Riding the CDT-alternative single track was not much fun. I couldn’t really, “unclip”, so I would just get stuck, and fall.