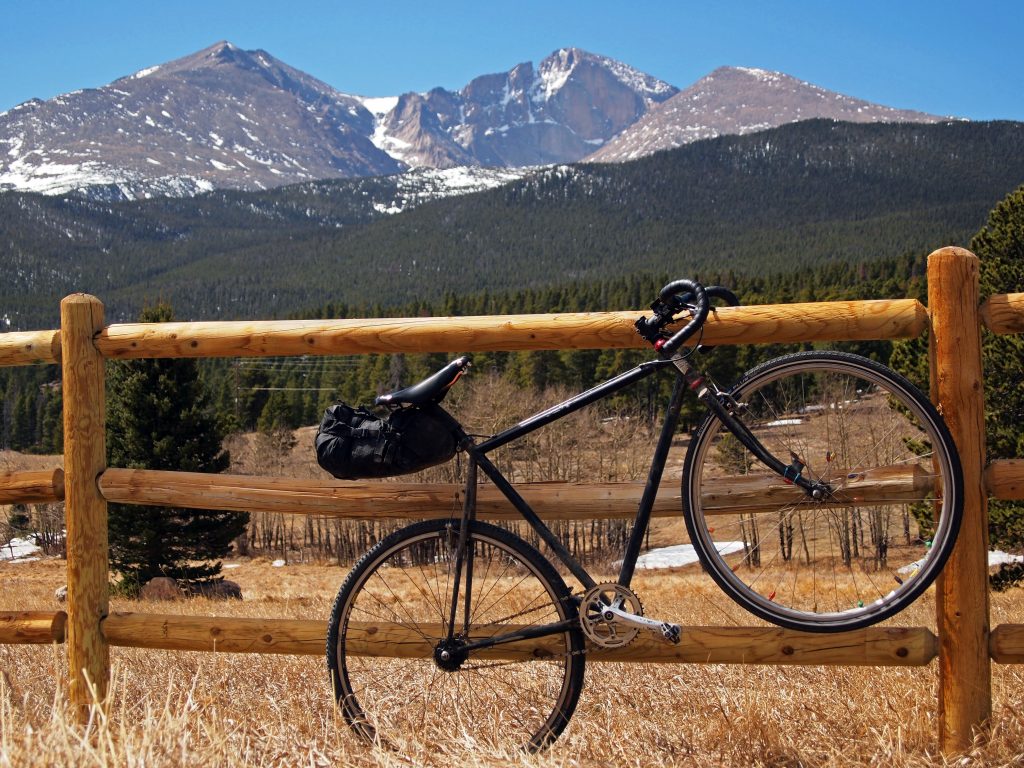 There’s a network of roads that make a N to S corridor, just West of the plains of Denver/Boulder and just inside the mountains of the Front Range. The cycling on these roads is, for the most part, spectacular. Most of my more, “serious” rides are rides into this corridor, until bailing at some convenient spot – the convenience is this: since the road network mirrors most of the major metropolitan areas of the Front Range, getting out of the mountains also means being pretty close to home. If not home, a bus station.

Ever so slowly, I’ve been trying to expand how long I’m on this corridor, until I, well, run out of road!

I wanted to do a Really Big Ride – say 200 miles and I wanted to do the ride with tons of climbing, since I’m a masochist – and on the CrossCheck, set up as a fixed gear, since… I’m a masochist. It’s strange to say, but I’ve never ridden 200 miles in a day before, on or off a fixed gear, through mountain roads or on the plains, in all my touring and racing adventures. The number seems to be a psychological road block though, even though I could probably touch a ~5 hour 100 miles on a flat route. But 200 miles? Not sure. But thought I’d try. As I wrote: tons of opportunities to bail out and get home.

Lowered the gear ratio further down on the dingle cog setup to 42/17 (~2.46:1) and a 38:21 (1.8:1). I’m becoming the master at dingle riding: the higher ratio is strictly for riding on flat areas, the lower for mountains. I changed the gearing twice on the trip – once when I started going up and the other time, when I finished coming down. That’s the way to do it.

A key to the early morning start for late risers, such as myself, is to get everything ready the night before – so when you’re fumbling around in a half-awake state in the early morn, you just basically have to dress, make coffee, drink the coffee, wish there was more coffee, stop making excuses for no more coffee and go.

Made it to Boulder in almost 2 hours. Found that to be a good time. Made it to Estes Park by 10:30 am and before 11:00am is early enough for a cappuccino, which I had. The barista asked where I had ridden from and I was embarrassed to say, “Denver”. At mile 108, I was in Nederland and somehow it was around 2:00pm, I want to say. A bit undulating between the two towns, even though they’re only around 30 miles apart. Nederland was also the time when I rethought this whole idea with a, “What was I thinking?” internal dialogue. Even bailing at this point, meant 40+ miles to ride home (or 18 miles of pure downhill, to the Boulder bus station, which I didn’t remember). Just something insane like that, but I kept pressing on, knowing if I just got to the Golden Gate Canyon Road, it’s the end of another long uphill and a sweet, sweet downhill to,

Central City. Bikes are not allowed to be ridden in Central City and I usually exercise my right of Civil Disobedience in  obediently breaking this law, but hell if I wasn’t hunkered so much I couldn’t really ride up the damn hill in and then, out of town, so I had to walk the bike through it anyways. I usually am not out of breath *walking* up anything. I had to take several breaks to catch my breath. I had serious hit a limit. All I could wish now was some sort of second wind.

The night fell just outside of Evergreen, where I found some sort of second wind in a bottle of cola, deciding not to bail out here, either and press on South into Kerr Gultch Road and Meyers Gultch Road, hoping for sleepy country roads with minimum traffic, until I could reach Tiny Town and Deer Creek Road that will lead me deliciously down back into the plains.

The roads weren’t as quiet as I hoped. There’s bloody towns on them! I had no idea… Not the safest riding, but down I got. At that point, finally, finally! I decided that it was time to pack it up and head home via the Platte River trail and home. The route, 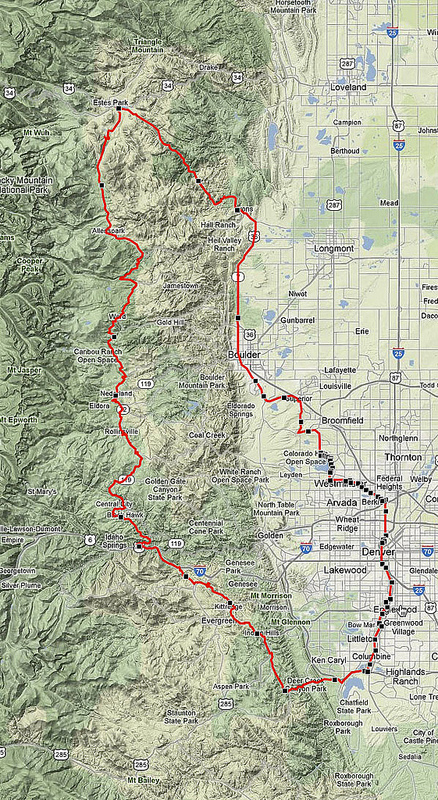 The body does funny things under such stress. Late in the day, outside Central City, I finally could not climb on the bike, without taking judicious breaks. My heart felt as if it was simply racing inside my insides and I simply could not breath fast enough. But, I found that if I simply stopped breathing through my mouth, but instead breathed through my nose, I couldn’t pedal as fast, and my heart didn’t get overloaded. Or something, I can’t say I’m an expert at what’s happening, except that if I was older, I’d probably have given myself a heart attack. Breathing through my nose is always difficult for me, as I just get all snotty when under duress like this. I wonder if my legs or my lungs or my heart are what’s lagging behind. I bet everything’s just about fagged out, to be honest.

But, once I got back on the plains, I was able to push those pedals just fine – a few miles/hour slower then fresh of course, but no need to stop and catch my breath. It’s like I have two different motors – one’s for climbing, the other’s for just goin’ straight. It’s a really strange feeling. I’m sure just riding on level ground is simply nearing my point of exhaustion, whereas climbing goes quiet a bit over. Not having lower gears to bail out to really does come into serious play once one is obliterated. 1.8:1 may sound like a small gear, but a 17t back cog is still in the middle of a 10spd cluster. I’m imagining doing this ride with a geared bike, but not ever going lower than that gear and well, forget it. I also think how faster this ride would be with a bike that, you know, coasted, as well as having a bailout gear. Bailout Gears. I could potentially cut the ride time by a third. Maybe. But, what’s the fun in that?

Once I got home, my throat was destroyed. There’s some dust in the air, but the damage was mostly from breathing so damn hard via my mouth. Probably should work on that. I’m already working on a deficit of oxygen in the air, what with the starting elevation. Thank goodness for Throat Coat tea.

Even this crazy route can be expanded upon. Instead of taking Kerr Gultch Road, one could take the Evergreen Parkway Southwest, until you reached HW285 and then take High Grade back down into Deer Creek Canyon. And then, you’re done. Unless, you stuck on HW 285 West and took a serious of country roads all the way to Woodland Park – and those country roads are dirt. And then, you’re done.  Unless, you wanted to take HW 67 South, along the backside of Pikes Peak and then – well, you’re on your own, I have no idea what’s out there.

But, good self-test ride, these 200-odd miles. Good test of my condition, which is fair. Hell, take away the pavement along the route that’s in the mountains and you have an atypically hard day on the Tour Divide. In some respects, it makes the Triple Bypass blush, it’s 16,700 feet of elevation gain – except for the height of the elevation gain, which this route does not come near. It makes one wonder if it’s possible to do the Tour Divide on a fixed gear. It’s still, still not been officially done. Even riding a 1.8:1 gear ratio would still not make it up most any of the mountain passes completely. you’d be walking a ton.

Anything longer, and I’d rather go somewhere else than a tight circle, which means, taking along a sleeping bag and bivvy, which incidentally is on order.