Sunday’s ride proved to be a nice loop ’round the neighborhood, starting in Denver at around 5:50am. Starting with a swift ride to Golden with little traffic and summiting  the top of Lookout Mountain Road to see the sunrise and then, somewhat disappear as the bright start of the day seemed to starve itself into a constant morning gloomy overcast.

Which isn’t a good sign, especially if you see dark clouds, over high, yet close mountains as I was observing over the James Peak Wilderness at the Genesee exit, If I could magnify the James Peak Wilderness area a little, those clouds would look a little more like this,

(Or you try this larger version)

Which may give one pause, if they’re riding towards them but for me… eh, what the Hell. The snow didn’t truly start falling until about three miles up the Central City Parkway and at that point, well, what’s the point of going back? It would have been three miles of going down a slippery road in the snow. It made much more sense to go the rest of the way to Boulder, by way of Nederland. Central City/Black Hawk is a curious place, as cycling in the town is illegal. Cautiously, I made it down the slippery streets, thumbing my nose at the “no bicycles” sign and then equally cautiously avoiding the attention of the parked police SUV, not 100 meters down the road.

Damn if it didn’t snow until the turnoff to Golden Gate Canyon, 10 miles away. Then it was just wet and muddy and everything was downhill, for the most part. And cold, as I misjudged the forecast, I didn’t bring cold-weather clothes, I brought “Spring-like conditions” clothes. Coasting downhill and drenched sure brings the shivers and I couldn’t pedal without getting fairly close to cramping up. Kinda fun.

My first stop of the day was Happy Trails Bike Shop and Coffee shop in Nederland. I parked my bike outside and nonchalantly walked in as if I was a regular. I took a pit stop in the bathroom and only then saw what I looked like, I came out of the bathroom, apologizing profusely, although the barista wasn’t taken aback from it all. It’s… somewhat of a casual town.

The plan after Nederland was to find Sugarload Road, as it has one of the steeper downhills in the Front Range. Mistakenly, I took a turn East on a road that was about 300 meters before my designated turnoff point and missed the road entirely, but found a nice dirt road that lead to lonely pocket of space and then a crazier switchback road back down that connected to Boulder Canyon Road, so the day was not lost. More mystery waiting to be discovered at a later date.

Riding down Boulder Canyon Road wasn’t really on my scheduled to-do, as I was worried about weekend traffic and yeah the reality of it all: hurling down a 2 lane highway, with my feet up on my bike’s frame, as the cranks of my fixed gear whizzed around freely below them like a pair of murderous weaponry awaiting my feet to slip into its clutches and having the whole machine with me in tow going from 40mph to 0mph in a little more than it takes to yell out, “Share the Road” towards a Chevy Suburban with Texas plates, whilst I share more than my requirement of blood sacrifice to the bike gods.

“I’m getting too old for this”, I was thinking to myself, but I again tempted fate and had safe passage this day. The only thing left was to get back to Denver and the only real obstacle is the hill on McCaslin, clocking in at around two hundred!,

But it has a special place in my heart, as it was one of my First Great Hills, I was able to topple, on my bike and the gateway between Denver and Boulder. Summitting that hill made me feel like I could do anything and it was the same today. Granted, I had nearly gained a total of 13,000 feet already, so tired legs made things more of a grin and bear sort of deal.

After that, it was a easy spin back home and all the burritos I could eat. 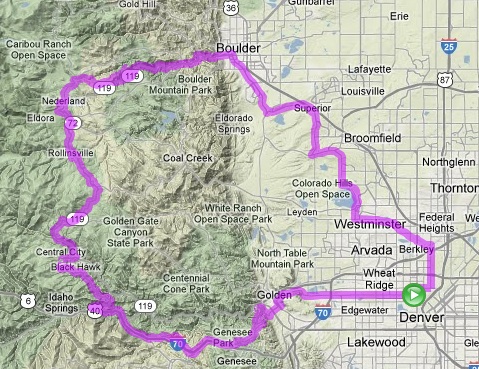